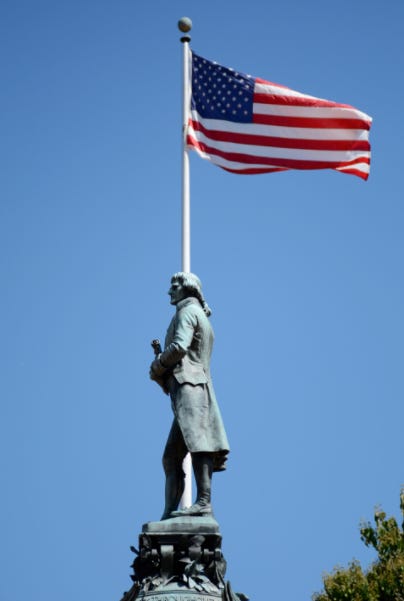 Cavalier Daily - Several groups on Grounds collaborated to write a letter to University President Teresa Sullivan against the inclusion of a Thomas Jefferson quote in her post-election email Nov. 9.

In the email, Sullivan encouraged students to unite in the wake of contentious results, arguing that University students have the responsibility of creating the future they want for themselves.

“Thomas Jefferson wrote to a friend that University of Virginia students ‘are not of ordinary significance only: they are exactly the persons who are to succeed to the government of our country, and to rule its future enmities, its friendships and fortunes,’” Sullivan said in the email. “I encourage today’s U.Va. students to embrace that responsibility.”

Some professors from the Psychology Department — and other academic departments — did not agree with the use of this quote. Their letter to Sullivan argued that in light of Jefferson’s owning of slaves and other racist beliefs, she should refrain from quoting Jefferson in email communications.

“We would like for our administration to understand that although some members of this community may have come to this university because of Thomas Jefferson’s legacy, others of us came here in spite of it,” the letter read. “For many of us, the inclusion of Jefferson quotations in these e-mails undermines the message of unity, equality and civility that you are attempting to convey.”

The letter garnered 469 signatures — from both students and professors — before being sent out via email Nov. 11.

Fun fact about Thomas Jefferson, he wrote the Declaration of Independence. People forget that. He was a Founding Father and a President of the United States. I mean not only did he invent and found the University of Virginia, he’s literally the reason we even have a country on which we can build colleges in the first place. So if reading his name in an email on the campus of your $60K a year school is considered a microaggression because he owned slaves in the 18th century that’s a very tough thing to get on board with IMO.

“The intention of the email was to start a conversation with our administration regarding ways to be more inclusive,” Hurd said in an email statement. “In the current climate, we must seize every opportunity to communicate that this university welcomes individuals from all backgrounds.”

Politics Prof. Lawrie Balfour said she believes everyone who signed the letter, including herself, was grateful that Sullivan responded to anxiety following the election — however, many felt it was the wrong moment to turn to Jefferson, following incidents of identity-related hate speech.

“I’ve been here 15 years,” Balfour said. “Again and again, I have found that at moments when the community needs reassurance and Jefferson appears, it undoes I think the really important work that administrators and others are trying to do.”

Hurd said she believes the University should consider ways to better express inclusion.

“I drafted the e-mail because when Jefferson was referenced in emails related to the election, it communicated to me a message of exclusion,” Hurd said.

Both Hurd and Balfour said they hope this issue encourages conversation about Jefferson’s place at the University.

“I think that Jefferson is often celebrated for his accomplishments with little or no acknowledgment of the atrocities he committed against hundreds of human beings,” Hurd said. “This is a complex issue but members of our community are intelligent and compassionate enough to be able to wrestle with this history and decide how we want to move forward as an institution that welcomes all.”

That god damn pesky Thomas Jefferson keeps popping up, in quotes, on the campus he invented! How the fuck is anyone supposed to own and operate a Safe Space with that kind of bullshit?

Hate the people that say “if you don’t like it, leave!” but like, if you can’t hear the name Thomas Jefferson without being triggered, America is a tough tough place for you to be.