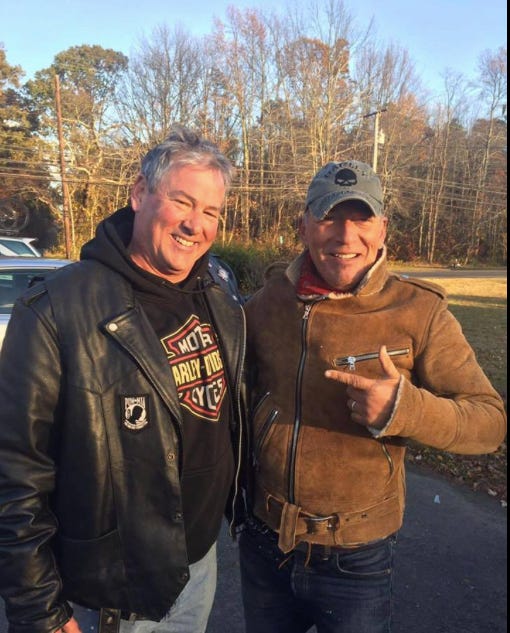 HOLLYWOOD REPORTER – Bruce Springsteen went out for a ride and may not have gotten back if not for some good Samaritans on Veterans Day.

Springsteen took advantage of a warm day in New Jersey by taking a spin on his motorcycle, but it broke down on the side of the road by Allaire State Park. At the same time, members of the Freehold American Legion Post 54 Legion Riders — who represented Post 54 at the Veterans Day Ceremony in Holmdel for Veterans Day — had the same idea, enjoying the nice weather by taking a ride to Manasquan before returning home to Freehold.

As members Dan Barkalow, Bob Grigs, Donald Clayton and Ryan Baily were making their way through the backstreets — er, back roads — back to Freehold, they noticed a scared and lonely rider on the side of Allaire Road calling out for help. The veterans pulled over and discovered it was Springsteen. Baily had the Boss climb onto his bike, and the men gave him a ride to Mulligan’s, a restaurant in Farmingdale, while the 67-year old rocker made a call for a pickup.

After the guys went inside, sat down and had a few drinks, the thankful singer threw in $100, told them to keep the change, posed for a few pictures and took their phone numbers — presumably for future rides or one heck of a thank-you note.

I wouldn’t be surprised if these dudes died the day after this happened. As a Jersey guy and a bike guy, finding Bruce Springsteen stranded on his bike on the side of the road has to be an actual dream these men have had before. This was the best day of their lives, and honestly I’m happy for them. The Boss even took their numbers,  so they probably went to bed giddy with the prospect of their hero being their new best friend. I’m sure Bruce is going to be calling them all the time, to hang, pen tunes, and talk about the time they saved him as he was huddled on the side of the road like a refugee.

This isn’t the best look for Springsteen, who take’s a bit of a hit to his man’s man image. He rode away on the back of the guy’s motorcycle, arms clasped around the stranger’s waist, with his balls all crammed into the back of the guys butt. Not really a swinging dick move by the Boss, but it made these guy’s life, so I guess it’s worth it.

A list of puns I didn’t use in the writing of this blog.

Didn’t use any of them. You’re welcome.