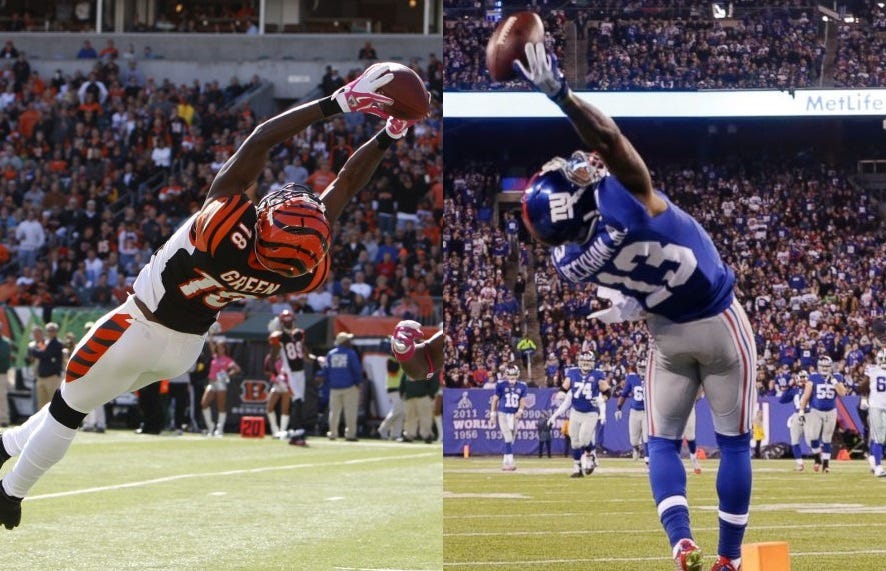 Neither of these teams have exactly thrived in prime time games as of late. Andy Dalton is notoriously bad on any big stage while the Giants have dropped 4 of their last 5 Monday nighters by 2+ scores. Still, if nothing else, seeing Odell Beckham Jr. vs AJ Green should be way more entertaining than the slop we’ve seen on MNF so far. With the NFL season heading towards the stretch though it’s more than just about putting on a good show tonight.

The Bengals come out of their bye in desperate need of a win to have any hopes of losing a 5th consecutive playoff game under Dalton. The AFC West has a stranglehold on the wild card spots, so it’s division crown or bust. A W keeps them in the mix among the Ravens & Steelers. Meanwhile, Big Blue sits with the 3rd-best record in a muddled NFC yet little hope of catching the streaking Cowboys (although their 12/11 matchup could change that). It’s still all about the wild card for them right now, and 6-3 would keep them in control with the lowly Bears & Browns on tap next.

Truth be told though, the Benglas kinda suck. Their 3 victories have been a nail-biter over the Jets then a pair of home wins versus Miami & Cleveland. They tried REALLY HARD to lose a 27-27 tie to the Skins 2 weeks ago. They’ve got a very versatile, balanced offense with weapons like Green, Hill, Bernard & now a healthy Eiffert – yet despite averaging almost 400 yards/game they’re hanging just under 21 points. That’s just as many as the dreadful 49ers score (which is more than the Giants but that doesn’t fit my narrative). Green is obviously a superstar but he’s had an all-or-nothing season. Four incredible games vs four “mortal” efforts. If he’s a mere mortal, the Bengals don’t win.

Green will be the ultimate test for Jenkins & DRC who are two of PFF’s highest-ranked cover corners over the last month. The Giants defense as a whole has been able to stifle teams through the air all year. They’ve racked up more picks than TDs allowed & are one of only 6 units allowing a sub-60 completion percentage. Sure, going up against Wentz, Keenum & Flacco aren’t exactly a gauntlet of the NFL’s elite – but Rodgers & Brees had subpar outings against the G-Men as well. Against Cincy, it’s not rocket science. Contain AJ Green & it’s gonna be hard for a guy like Dalton to beat you.

Eli’s coming off a 4-score performance last week (although picks let Philly hang around too long) & should be in for another healthy stat line against a Bengals defense that’s given up 16 passing TDs already. Plus, despite having Carlos Dunlap & Geno Atkins (24.5 sacks last year), they’re not much better than the Giants at getting their hands on QBs. Atkins is gonna be a guy to watch tonight against a Big Blue line without Justin Pugh. If McAdoo wants, they can run against Cincy as well. Paul Perkins is slowly climbing up the trust tree & saw all the 4th quarter RB action last week. Perhaps tonight is the night we see him dominate early-down touches.

No Cruz? No problem. Sterling Shepard’s been real quiet since Week 3 but cashed in a 32-yard score last week. Jerell Adams, Roger Lewis & Will Tye did well with their target uptick too after Cruz went down. As long as ODB is getting all the attention, Eli will make due of whatever secondary options he’s got. I gotta think Beckham can have his way against an aging Adam Jones-led secondary, but they’ve actually done a good job bottling up #1 WRs this season. The Bengals just haven’t been able to defend anyone else, so all hands on deck for Big Blue.

McAdoo’s crew are staring down a legitimate possibility at an 8-3 record if they can get by the Bengals tonight. Next up are the Bears in full dumpster mode after Alshon’s 4-game ban, then a trip to Cleveland. I’m not guaranteeing a 6-game win streak but if these G-Men are for real, they gotta beat the teams they’re supposed to. Cincinnati falls into that category. The Giants are gonna be playing some January football and there’s nothing the shitty Bengals can do about it. Here comes the breakout. 34-20 Big Blue. 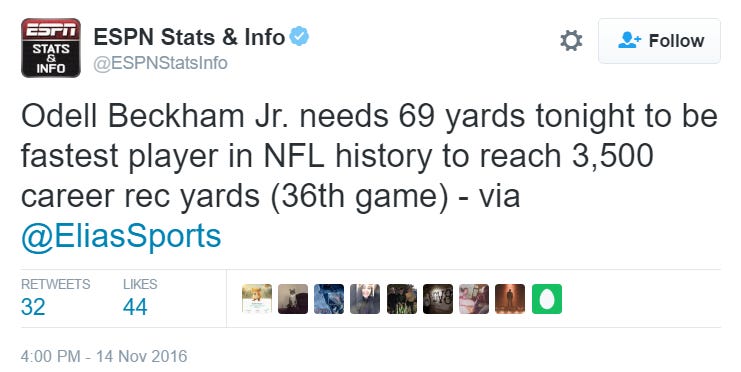