The Toronto Maple Leafs have managed to stock pile the best group of young talent in the league. I think everybody knows how good Matthews, Marner and Nylander are. They’ve got kids like Kapanen and Timashov just waiting to get called up still. But one player who they missed out on was Mr. Travis Konecny after the Flyers traded up with Toronto in the 2015 NHL Entry Draft to take him at 24th overall. He was right there in Toronto’s hands and they let him slip away because Ron Hextall probably scared the shit out of them on the draft floor and bullied them into making the trade. And last night, Toronto got a chance to have their first G.O.B Bluth moment and realize what a huge mistake they made.

As long as something doesn’t go drastically wrong, this kid is going to be a fan-favorite in Philly for his entire career. He’s undersized, underrated, and he uses that as a chip on his shoulder. The kid plays with an edge and is GREAT at getting under his opponent’s skin. We saw him do it to Steve Ott on Tuesday night. And here he was last night putting Auston Matthews in his back pocket after bullying him for an entire shift.

4 goals and 10 points through his first 15 games in the league. The kid can play. Now as for the team in general…..? Well buckle up because we’ve got an angry recap ahead of us.

Last night’s game was pretty much the complete opposite from what we’ve seen from the Flyers so far this season. And not in a good way. Typically the team has been starting off like dog shit, puts themselves in a hole in the 1st period, starts to figure it out in the 2nd period and then have a game on their hands in the 3rd. Last night the Flyers and Maple Leafs combined for 3 goals in the first 5 minutes of the game and they actually went into the 3rd period with a 3-2 lead. Something seemingly inconceivable for this team. And then Toronto scored. And then they scored again. And then again. And then again once more for good measure. A 4-goal 3rd period and one of the worst collapses you’ll see all season. So who do the Flyers have to blame for last night? Well let’s go down the list.

I think Hakstol has done a great job with this Flyers team. He took over a heaping pile of shit left from Craig Berube and formed it into a playoff team last year. The team has bought into his philosophy and they’re on the right track for long-term development. With that being said… in what world should Michael Raffl ever be scratched for Chris VandeVelde? I’m sure that VandeVelde is a great guy off the ice. I’m sure he’d make a great friend, great husband, great father, great everything. But just because somebody is a great guy doesn’t mean you have to play him every night. Michael Raffl is one of the most versatile players on the roster. He can play at any position on any line. He’s not particularly great at any specific thing but he’s not bad at anything either. But want to know where he can’t do anything? In the fucking press box. That’s where.

(Sidenote: the Flyers really need Scott Laughton to return soon. Roman Lyubimov has been doing a good enough job at not making any glaring mistakes but you can tell they still miss Laughton’s presence. Even if he hasn’t exactly developed the way the Flyers have wanted him to by now).

Tough turnover on the powerplay. Sure, I get it. But dude…. 6 fucking goals on 23 shots when you’re in a battle with Neuvirth for the starting role? Get out of here with that shit. The Flyers goaltending has been horrific so far this season. They each occaisionally have their moments during games that give you some sort of hope that one of them will figure it out. But you can’t give either of them back-to-back starts because they’ll find a way to fuck it up. 6 goals on 23 shots. If I’m Steve Mason right now, I’m searching for my favorite hat to wear on the bench while you open up the doors. Fucking Christ. The bottom 6 and goaltending are handicapping this team that has actually found a way to score goals this season. The year this team finally has offense and they can’t buy a save. 3 goals against Toronto should get you a win. 4 goals against Montreal should get you a win. Can’t wait to see how the make me want to kill myself tonight against Minnesota.

P.S. – go back to these jerseys. They’re beautiful. They belong in a museum. 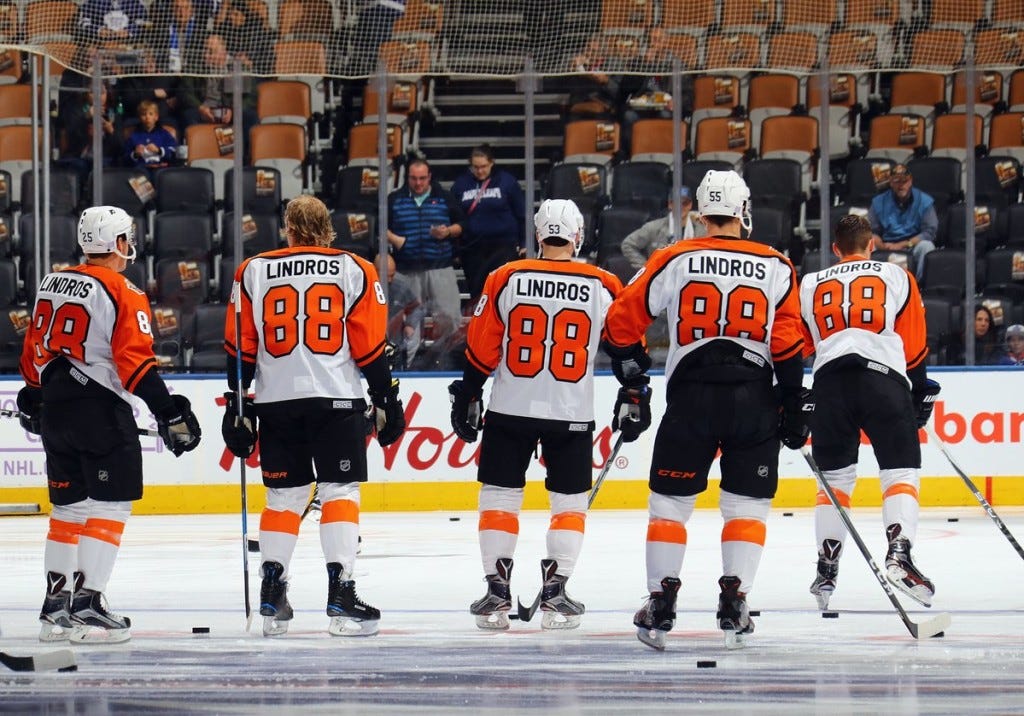