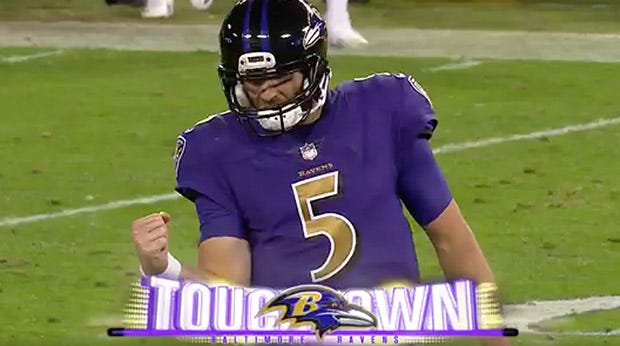 Before I get started here, let me put out a grain of salt alert. Yes this was the Browns. Yes they’re 0-10. Yes they haven’t got one goddamn clue who their QB is. But I don’t care. The Ravens haven’t beaten anyone by more than a touchdown in 22 months. They also haven’t shown any sort of ability to finish off drives all year and they did it 3 times in one half. So I won’t apologize if I’m enthusiastic about this win. That 2nd half was exactly the kind of half that this team needed so desperately. Outside of one more bad INT by Flacco, they did all the right things in that half. Everything went the way it was supposed to. We might look back on that 2nd half and say that this is where the Ravens turned a corner. We’ll know better after they play a good Cowboys team next week, but for now we’re gonna enjoy this one. More thoughts:

– Joe Flacco had a roller coaster of a game. His final line was pretty good though. 30/41 for just under 300 yards and 3 TD’s. Most people will remember the two awful interceptions though. And they were truly awful throws. I think what we’ve been seeing recently is a QB who knows his offense is underperforming, and he’s put too much pressure on himself to be a hero. He’s forcing balls that I’ve never seen him force before. Yes, he’s good for his fair share of head-scratching throws every year, but some of these interceptions just looked like he was trying to hard to make a play that wasn’t there. But I think the success he had in the 2nd half will rebuild the confidence in himself that he was starting to lose. And it’s good to see him start to have fun out there again, even if his celebrations are um… wallpaper

– I said yesterday that I wanted the running game to show its teeth against the Browns, and they certainly did. It wasn’t like they were running it right down their throats, but they battled for yards and fell forward more often than not. It allowed the offense to get into some manageable 3rd downs and have options. That’s why they converted 7/12 3rd downs. Most  importantly, they ran their best in the 4th quarter when they had the lead. The Ravens ran the ball enough in the 1st half to wear down the Browns’ front 7 and have them sluggish late. Both Terrance West and Ken Dixon were able to get it going behind an offensive line that was missing both of its starting guards. When this offense is balanced, it flourishes and last night was a great example of that.

– Alex Lewis went down with a pretty ugly high ankle sprain that appeared to be broken at the time. I guess it’s good news that it’s not broken, but those high ankle sprains linger for months. I wouldn’t be shocked if we don’t see him until late this year, if at all. Tough loss for a rookie who has exceeded expectations from day 1. The OL will suffer, but getting Marshal Yanda back on 10 days’ rest will more than make up for his loss.

– Breshad Perriman caught his first career touchdown (again)… sorta. I think if reviews were done without an initial call to go off of, that ball would’ve been incomplete. But whatever. Guy has worked hard and is starting to make some modest progress, so good on him.

– I love Dennis Pitta and always will, but he deserves a tongue lashing for the way he blocked last night, especially early on. On consecutive plays, he did a shitty job of sealing off a DE that would’ve helped West break a big run, and then completely failed to even lay a finger on Jamie Collins who blew up Flacco on 3rd down. It took the Ravens from 3rd and 4 at the Browns 37 (possibly 4-down territory or a 54-yard FG attempt) to 4th and 16 near midfield. It’s not discussed much, but the Ravens really miss Crockett Gillmore and his blocking ability.

– Steve Smith also had a solid game and got into the end zone for the first time since missing games with a sprained ankle. He also moved into 8th place on the all-time receptions list, passing Reggie Wayne and putting him 3 away from 1,000 in his career. But all anyone’s talking about this morning is his rendition of the Ray Lewis’ dance, and his postgame appearance on NFL Network where it took him no less than 10 seconds to go after Rodney Harrison for comments about his age. The guy is just a content machine.

Also he’s got a big shovel or something.

– This defense is phenomenal now that it’s healthy. Top 5 no doubt, and the takeaways are starting to come too. Everything is starting to click. They held the Browns to only 144 yards and 11 first downs. Sure it’s the Browns, but they basically did that to the Steelers for 3.5 quarters last week before they dropped into Tampa 2 and let the Steelers rack up tons of yards underneath. If we’re talking YPG, they’re #1 in the league at 281.6 and #1 in rushing yards allowed at 71.3. A defense that stops the run is the sign of a great one. Just as long as the offense can protect the football and put up a respectable showing, this team has potential

– Terrell Suggs is back. I thought he looked sluggish the first few weeks, and understandably so. Achilles injuries are no joke. He was making a couple of plays a game, but you wouldn’t hear his name much throughout the game. Last night he was all over the place. Forced a strip sack, basically had another one that resulted in an interception, and was constantly in the backfield. Did I mention it was against big bad Joe Thomas? With a torn bicep? Yeah Sizzle is back and so is defensive football in Baltimore.

– Tavon Young might be the best pick in what’s looking like a VERY strong 2016 draft class. Guy has stepped into the starting cornerback role beside Jimmy Smith and has flourished. Yes his size is a bit of a liability, but he makes up for it with physicality and great footwork. Jimmy’s size gives them the ability to match up against different types of receivers. Excited for what this guy can do moving forward.

– Michael Pierce might be the best UNDRAFTED guy who got passed over in the 2016 draft. Guy was constantly bullying the Browns interior linemen, and batted a couple balls late that almost resulted in another touchdown. NFL Network pumped his tires by showing him squatting 725 like it was nothing. No idea how a guy like this slips through the cracks, and he’s not even just a weight room guy. He’s a great football player.

(Note: I twitter searched under videos the word “Pierce” to find a video of this and let’s just say I’d rather stare at the sun for a couple hours than ever do that again)

– Last night was a down game for special teams considering they didn’t block any kicks. Shame on them.

– Kidding, Tucker made all his kicks, Koch had a solid game, and we contained them on coverage. My only beef is with Devin Hester. It’s just not working with him. That ship has sailed. He hasn’t fumbled in a few weeks, but he’s also bringing nothing to the return game. If anything, he’s being too conservative with his fair catches. The Ravens brought Mike Campanaro back onto the practice squad this week and I am in full support of him becoming the guy on returns. I still think he can be a great talent in the slot, he’s just gotta stay healthy.

There ya have it folks. 5-4 and in first place. The schedule does ramp up a bit the rest of the way, but I think they’re taking strides to be prepared for those games. I think we can all agree that the Cowboys are a good team, but they’re overacheiving a bit. Let’s give em their comeuppance.