As I'm stopped at a gas station this morning, a group of guys yell over: "Time to get out of this country, Apu!"

I have a scarf on. Passed by someone on the platform today and he says, "Your time's up, girlie."

Not even 24 hours yet. My friend's sister, who is Muslim, had a knife pulled on her by a Trump supporter while on the bus by UIUC campus.

Someone on the streets of LA just yelled at one of my girl's Latina coworkers to "go back where you came from." #TrumpsAmerica 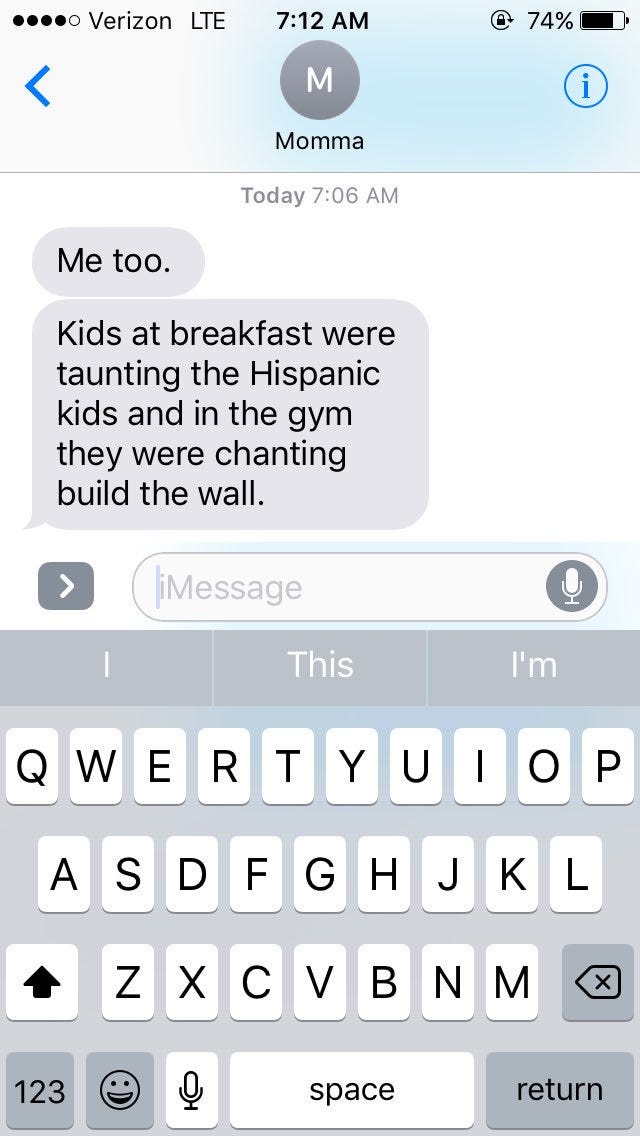 Whoever did this I'm throwin' hands pic.twitter.com/9Xn1YaCFmK 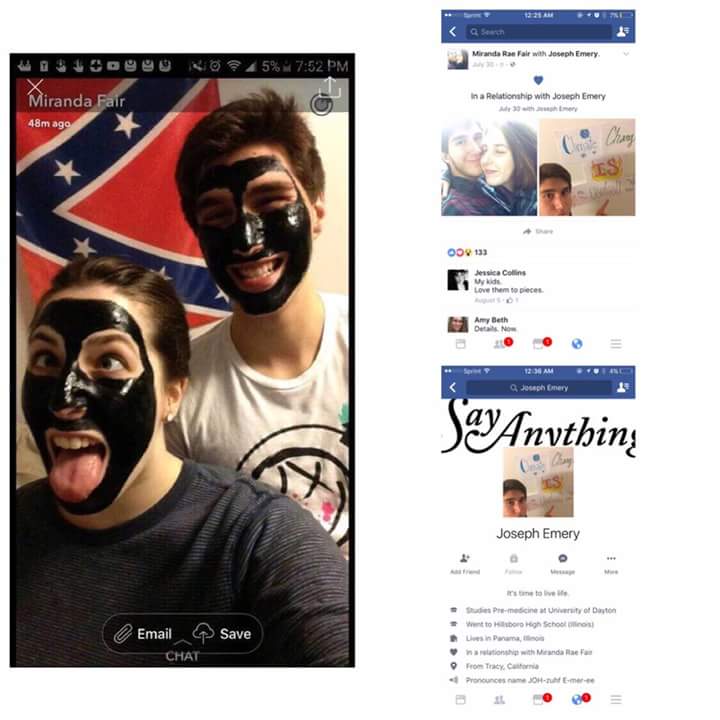 My mom literally just texted me "don't wear the Hijab please" and she's the most religious person in our family….

3 of my muslims friends, whom i've never seen without a hijab before, came to school without them today, because they were afraid. 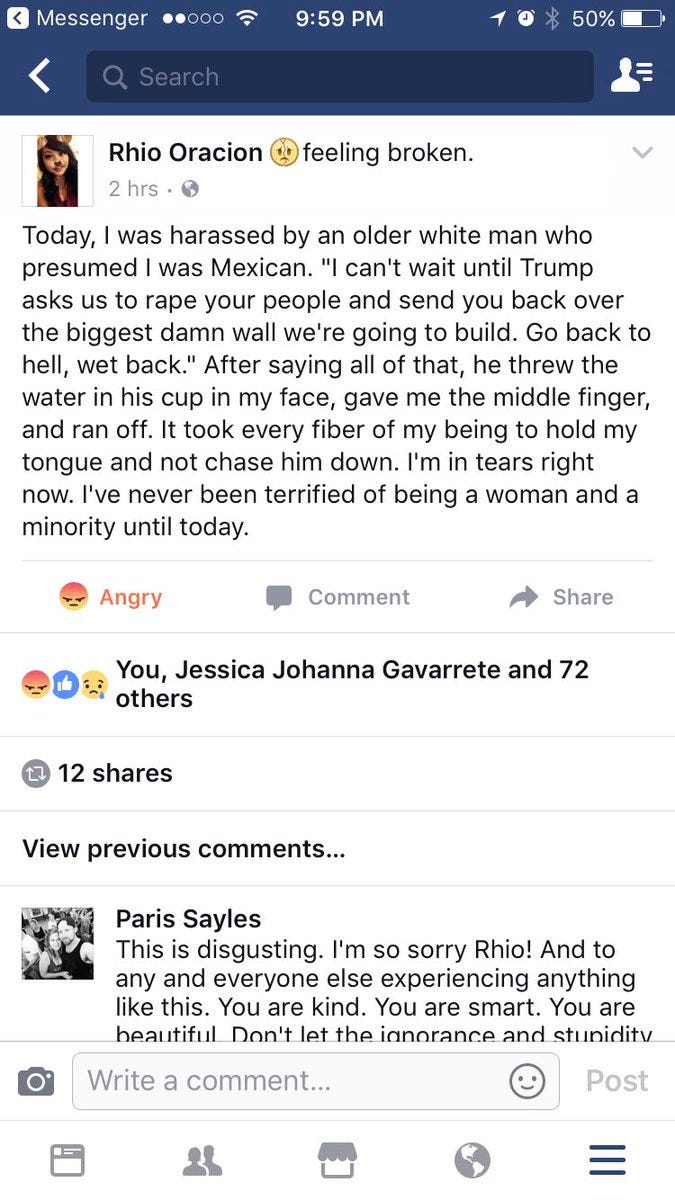 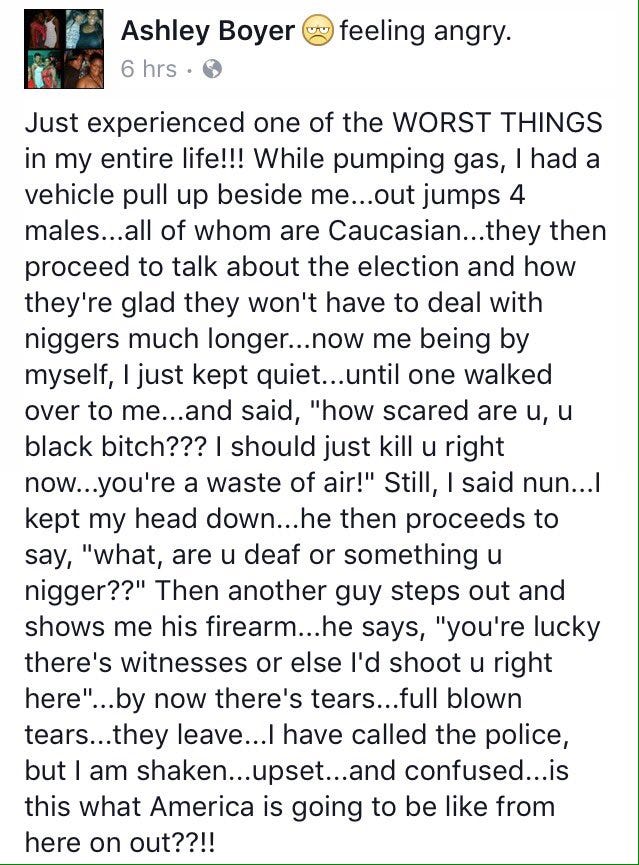 These are from this Twitter moments list. Yes, some of these stories may of course be exaggerated or even fake. It is, after all, the internet. There will also be many more that go unreported. But the sheer volume and content of these make what is happening to some people undeniable.

I joke around as much as anyone about Trump. I laugh and giggle and hoot and holler at a lot of his antics. I even laughed just looking at him sitting in the Oval Office today. Funny shit. But the truth and reality is that his rhetoric and some of the tones with which he used it is frighteningly alarming to the disenfranchised in our country. The many minorities that already experience significantly more complicated lives than the rest of us believe — understandably so — that they’re now subject to living in a country where not only do some people believe they don’t belong, but that their democratically-elected president too believes that.

Imagine for a second what that would feel like. That would suck.

Yes, racism exists in the United States. It exists everywhere, of course, but it definitely exists here. People that pretend it doesn’t are dumb. It existed before Trump ran for president, it existed during his candidacy, it will exist during his presidency and long after it. It existed before, during, and after Obama too.

What fucking sucks is that there are certain morons out there that believe that that inner racism is now okay, is now acceptable, is now the norm. That believe they can now act upon those horrifically misguided beliefs in their own superiority.

Fuck you. You suck. In the same way that a group of people dragging and beating a Trump voter gives a bad name to anti-Trump people everywhere, you doing this serves up a horrible name for Trump supporters everywhere. You’re hurting everything, even your own cause, not helping. The vast, vast, vast, vast majority of Trump voters are not like you. They despise you.

Let’s hope Donald does too (as I believe he does).