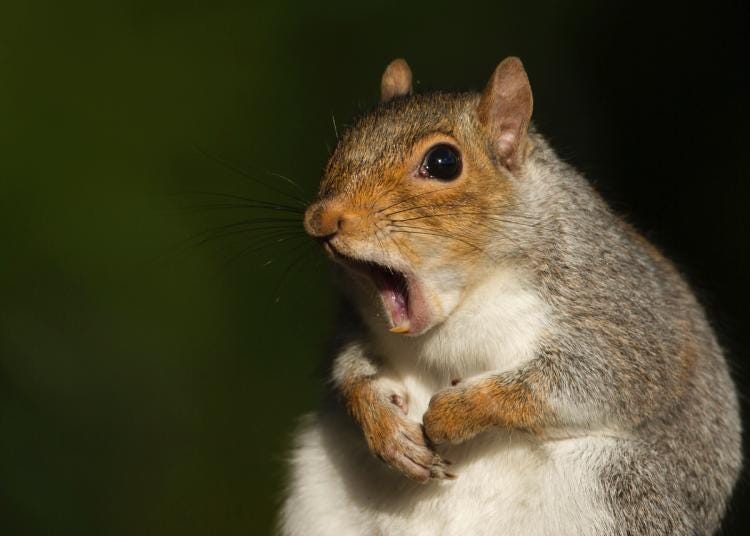 It was just last week when a rogue squirrel decided to break the unspoken agreement between squirrels and humans by attacking 3 people at a senior center in Florida. It was at that moment that war was declared against squirrels. Here was the warning I sent out last week;

So now that the agreement is no more, consider squirrels fair game. We gotta go out there and set the tone. Let them know that this kind of behavior doesn’t fly around here. Hope they’re hungry for a few Goodyear sandwiches.

But apparently those fury bitches either A) don’t read my blogs like pretty much everybody or B) read the blog but are cocky as mother fuckers because they’re back again.

DELTONA, Fla. – A squirrel attacked another woman Monday morning at the same senior center where several others were attacked last week, according to management.Sterling Court management told News 6 a woman broke her wrist trying to defend herself from the squirrel, which was biting and scratching her. She was taken to a hospital for treatment after the incident.

You’ve got to be kidding me. At first I was hoping that last week was just an isolated incident. But now it looks like we have a bunch of copycats on the loose and the squirrels are big dickin’ us all over the place. 2 attacks in the span of just a few days. That’s unprecedented. Luckily for us, however, and unfortunately for the squirrels.. this attack ended a little differently than the first.

“…A staff member shot and killed the squirrel with a BB gun, spokesman Brian Fawkes said.”

BOOM. Sit the fuck down, bitch. This is why I love the 2nd Amendment. You take away our guns, you take away our ability to defend ourselves against these blood-thirsty squirrels. It’s like my great grandpappy once told me, “the only good squirrel is a dead squirrel”. At first, I thought he was just senile or maybe just using “squirrel” as a euphemism. But now I get what he was talking about. For far too long have we been worried about these little rodents. Always going out of our way on the streets to avoid running them over with our cars. But not anymore. If any of these squirrels try to step to us again, we’re putting a BB in their skull. Shoot first, ask questions later. Squirrels are now officially tied at #1 on my “things to kill” list along with robots. Let’s get to huntin’.