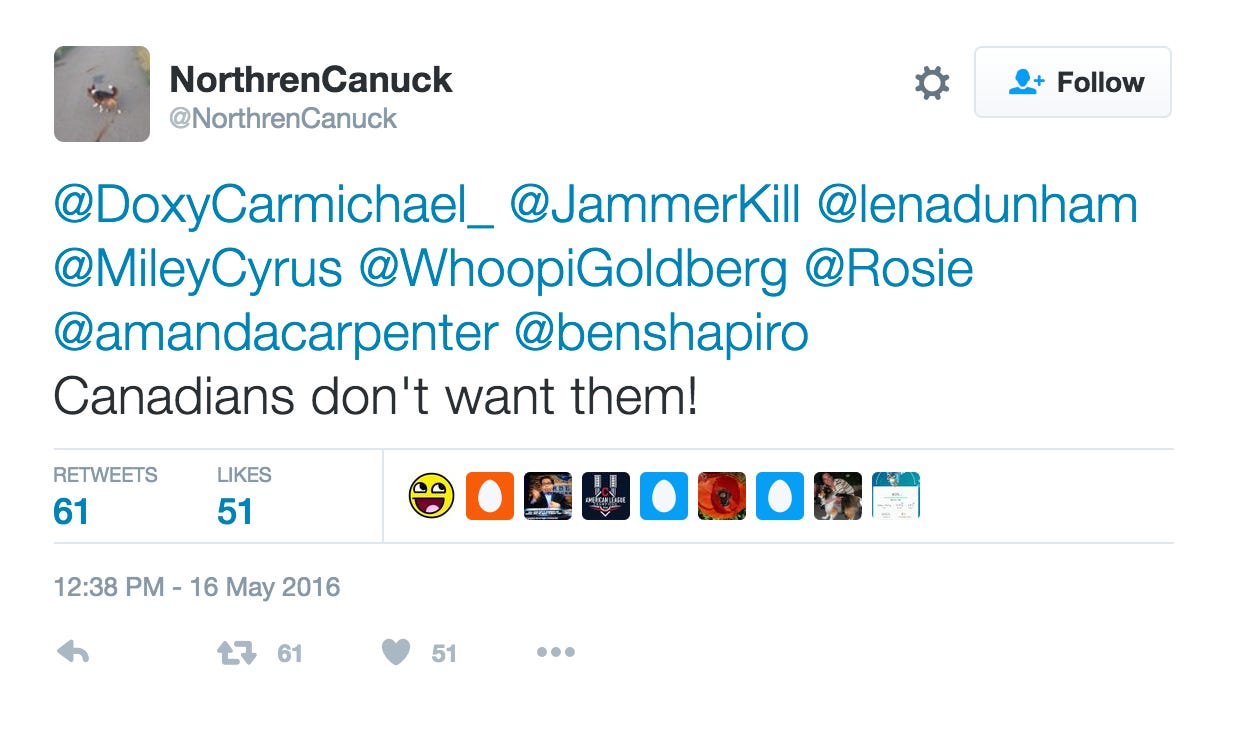 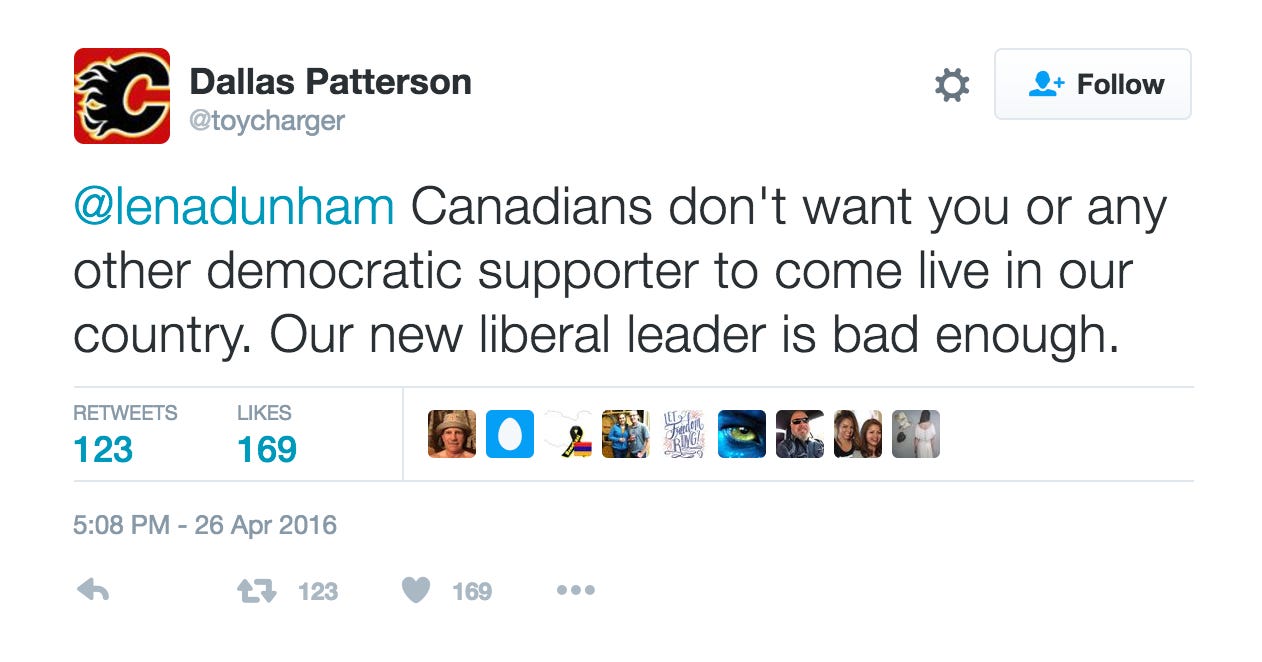 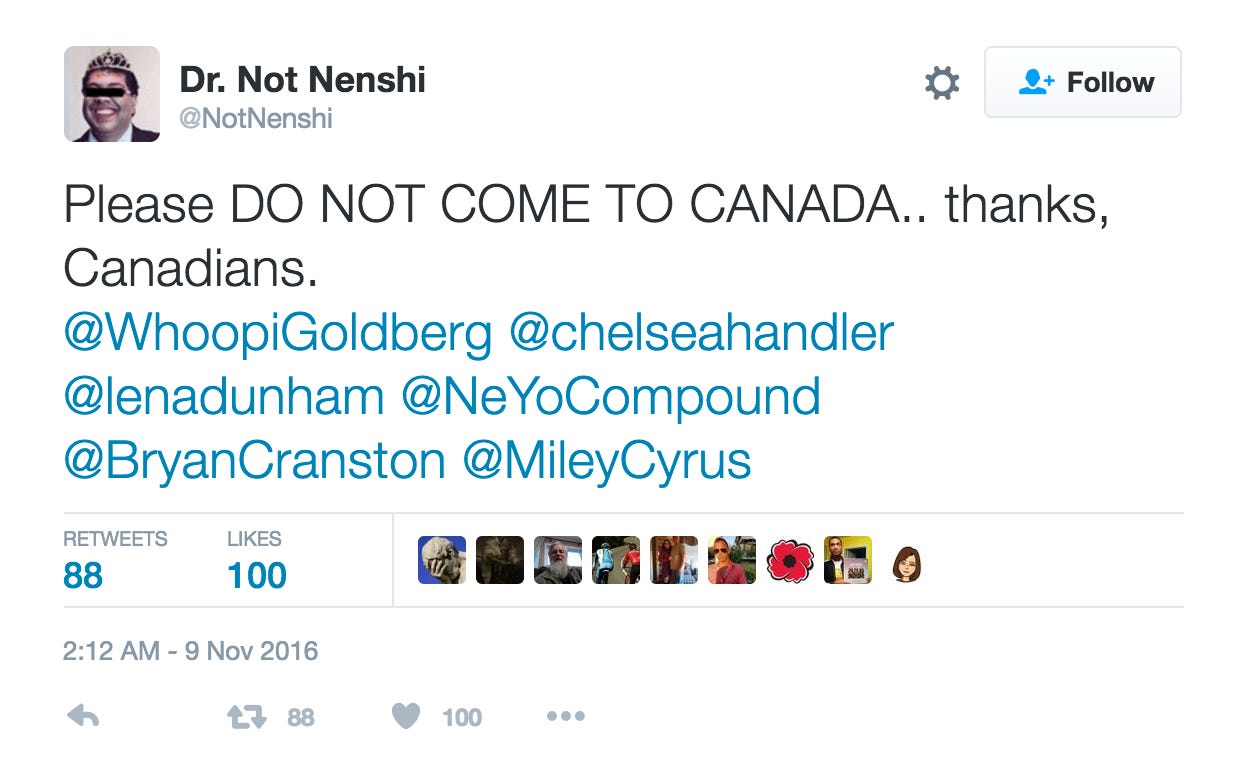 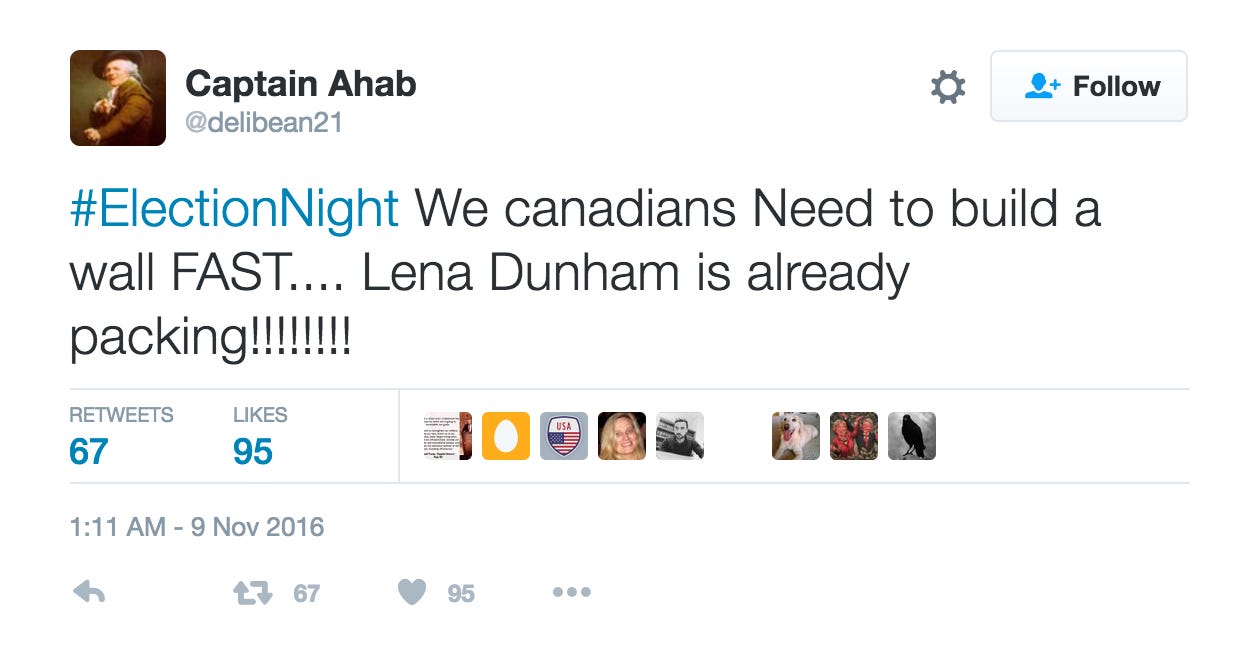 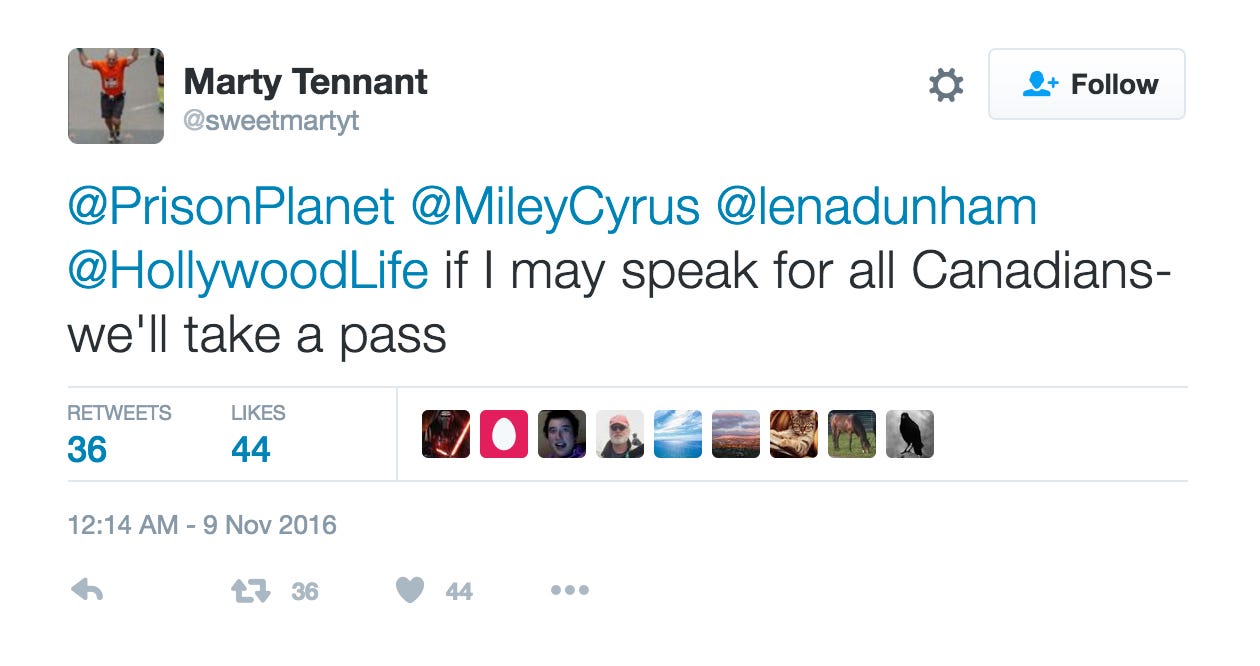 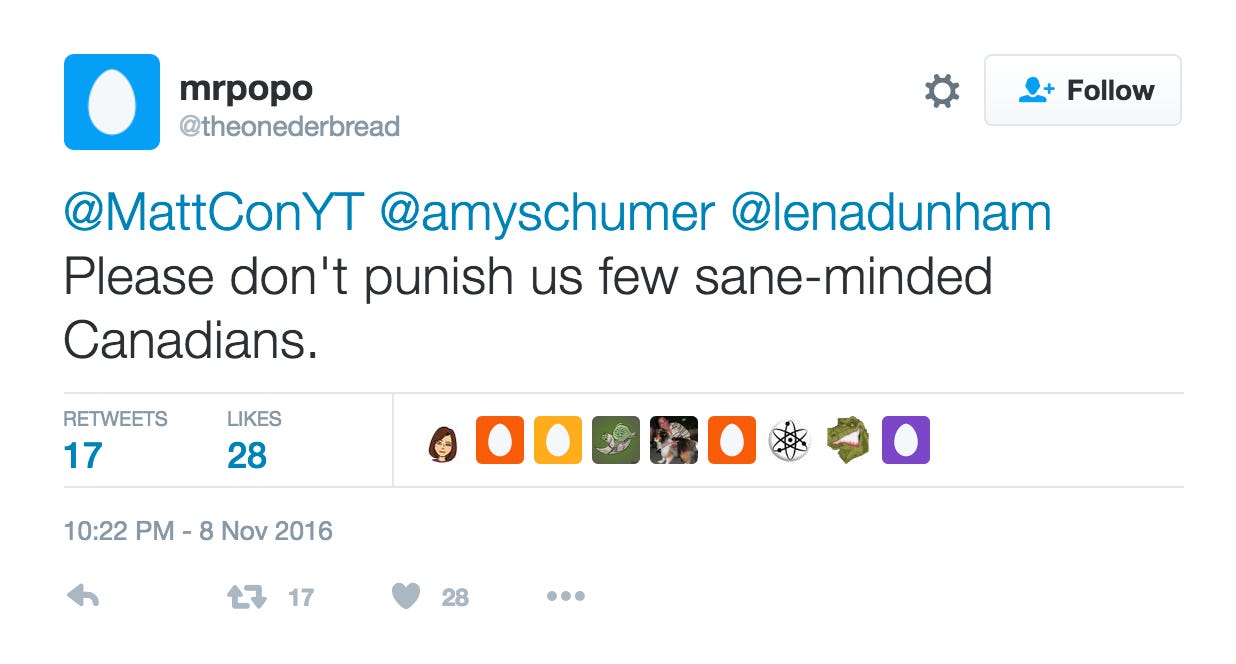 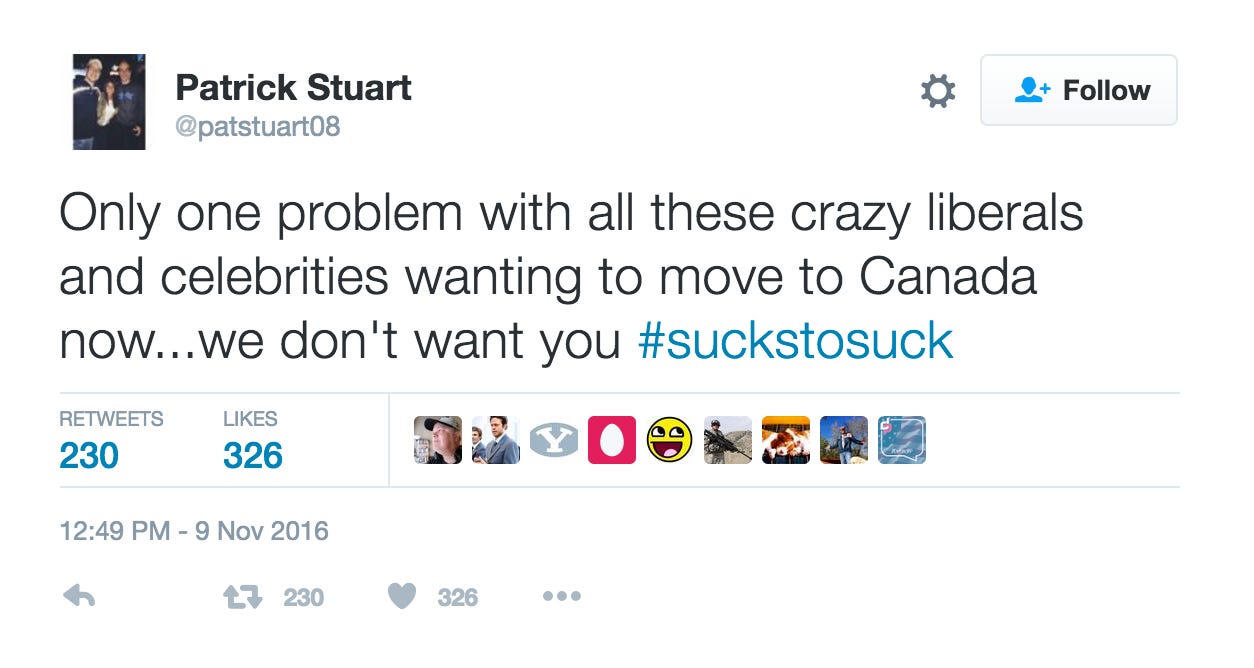 So here I stand, arm in arm, in unison, with Canada. America’s Hat and I, together proclaim, in one voice, “We don’t want you, Lena Dunham.” You’re exhausting and hypocritical and unappealing in so many ways, simply nobody wants your company. Not even Hillary Clinton wanted your company. It’s so Hollywood that all these celebrity losers like Lena Dunham and Amy Schumer would automatically assume Canada would welcome them. Yes, I know it’s all symbolic and hyperbole but the response from Canada is really not. Nobody wants you, guys. Nobody wants you at their party.

You gotta know that deep down, Lena Dunham has to feel a teensy bit responsible for this loss. She’s gotta know she’s polarizing. She’s gotta know her shtick drives at the very least like 75% of America crazy. She’s gotta know that there had to be some people who were like “Man, fuck this lumpy vanilla milkshake that looks like she wasnt mixed up well enough. Im gonna do the opposite of what she wants.” and cast their vote for Donald. Thats why shes gone silent. Thats why Lena Dunham Watch 2016 is now pushing 36 hours. Because deep down in places she doesn’t talk about at her dumb ass hipster parties, Lena Dunham knows she probably did more good for the Trump Campaign than she did for Hillary. The people who like all of her stupid antics – the rap videos and the articles and the tweets – were already voting for Hillary. And everyone else who was maybe on the fence were like “Maybe she really will live the country if Trump wins.” This is your fault, Lena. People like you and your cohorts who didnt take the majority of America seriously.