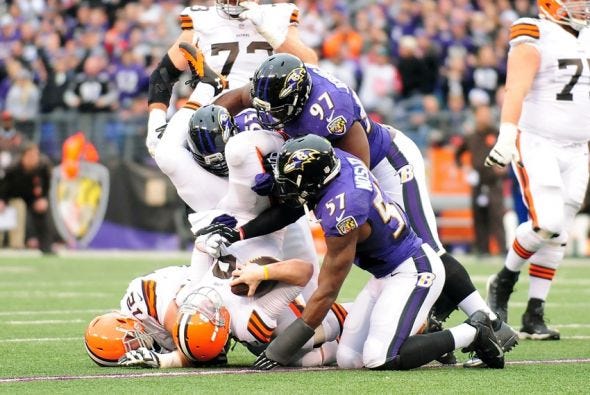 After a short week, the first place Ravens host the 0-9 Browns at M&T Bank Stadium. Every team in the NFL faces a short week with their annual TNF game and given that we’re coming off a hard-hitting game against the Steelers, normally I would have some concern there. Especially given that there were a lot of key players making their return from injuries in that game. But when the team you play on a short week is Cleveland… you don’t complain. They’ve gotta deal with it too.

Anyway, there’s really only one thing I’m looking for in this football game (other than a win obv), and that’s offensive firepower. I’ve seen enough from the defense to know what we’re getting from them. They’re a GREAT defense. Top 5 in the league when they’re healthy. My only issue with them is how it’s so damn frustrating that they leave 2 takeaways out there with dropped INT’s every week. The idea that that’s something they could correct and take advantage of down the road is pretty exciting.

But yes, the O needs to get it going. The offense showed flashes early in the year, but has gone from inconsistent to consistently bad the past few weeks. Yes that falls in line with the Trestman firing, but he was out of chances. Dude had to go. We really don’t know what this offense looks like under Marty Mornhinweg. I’ve always contended that Steelers games are games where you throw out the book on conventional football. Defense will prevail in those games and it always will. My point being that that was the first game where the offensive line was healthy since Week 3, plus Steve Smith has been out too. The key guy right now on the offense is Ronnie Stanley. I don’t know if he just got bullied last week or if his foot just isn’t 100%, but he got bullied on Sunday. I think he got nailed for 3 holding flags on his own. Holding flags are drive killers, so a single offensive lineman killing THREE drives is disastrous. The offense won’t be going anywhere if he doesn’t pick it up.

I also think we need to continue to be a run-heavy offense, even if it’s not terribly effective in the early going. With this defense emerging, we’re getting back to old-fashioned Ravens football. We need to control the clock, protect the football, and grind out wins. We’ll take our shots to Wallace and Perriman downfield and we’ll make some money there, but this team needs to realize that this team’s identity isn’t the ’98 Vikings. It’s closer to the Ravens of the 00’s. There’s still some hope for this team as long as the offense progresses. It just needs to know what it’s working towards.

I’m hoping we can see some of that success on the ground tonight. I want to see the Ravens get up by double digits and STAY up by double digits. They haven’t won a game by multiple scores since the playoff game in Pittsburgh back in the 2014 playoffs. We’re talking about the Browns here, in our own barn. Just get ahead and stay ahead and make this a stress-free evening for me.