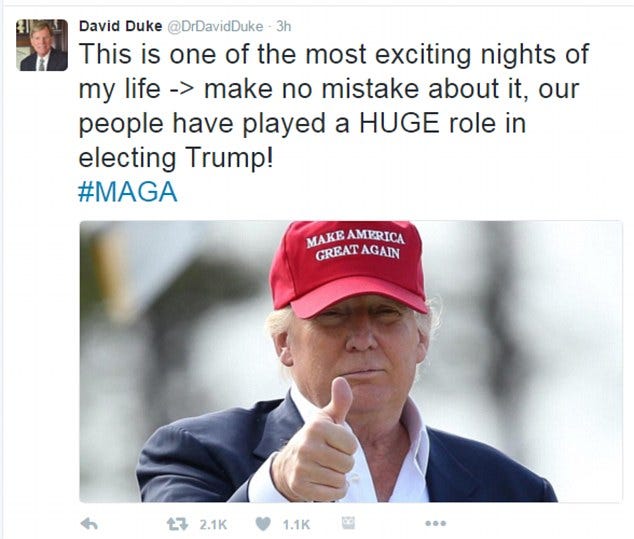 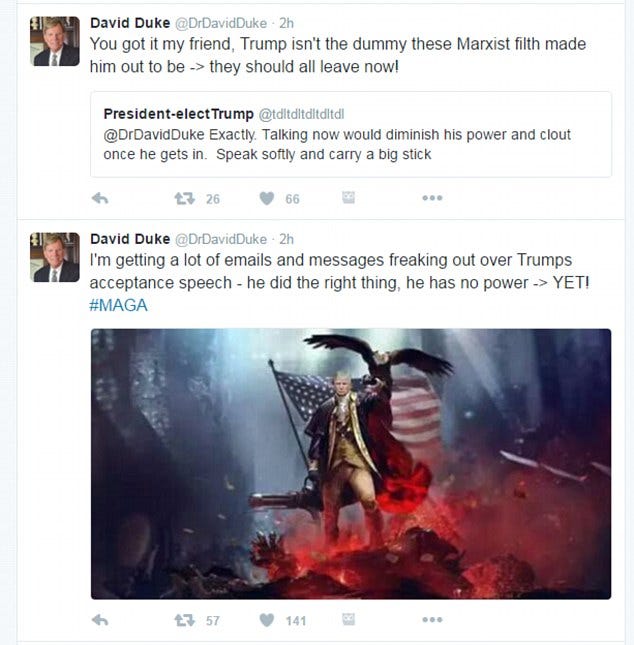 Daily Mail – Speaking to his fans following this morning’s shock announcement, Duke told his followers on Twitter: ‘This is one of the most exciting nights of my life. Make no mistake about it, our people have played a huge role in electing Trump.

“Donald J Trump now has the chance to become one of the greatest Americans to have ever lived. We have the moral high ground.”

Some of Duke’s followers expressed concern this morning after witnessing Trump’s acceptance speech, which failed to mention building a wall with Mexico or locking up Hillary Clinton.

Trump’s speech even praised Clinton for her lifetime’s service to the American people.

Duke tried to assure his followers: ‘I’m getting a lot of emails and messages freaking out over Trump’s acceptance speech. He did the right thing, he has no power. Yet.’

So Trump comes out and completely nails his victory speech, tones down all the stuff that people have criticized him the most for, seems genuine and gracious and maybe like he’ll be a new man now that he did what people said was impossible and won the election. And all along I’ve firmly been of the belief that that’s what would happen when he got into office, a more centrist approach in line with who Donald Trump has been for the other 60-something years of his life, an approach that most of the people who voted actually want but don’t even realize it.

But it’s prooooobably a bit tough to get people who were deadset against having Trump as President on his side no matter how good the speech is when friends like former KKK Grand Wizards pop up and start demanding campaign promises be kept. It’s sort of ironic given his life story but Trump is like the dude from the other side of the tracks who had to scratch and claw to get where he is but now some friends from the old neighborhood are back and acting like they’re the one who got him where he is. And he’s either going to stay on this new path, be appreciative of some of the past white supremacist support but never acknowledge them again…or he’s going to slip in with the old crew, get caught up in some of that ol’ brown people hating, and it’s going to be a debacle. David Duke is out there tweeting like a proud father that he got Trump elected even though he couldn’t even get himself elected in Louisiana, who knows what other miscreants think they’re somehow responsible for the most unique election victory in the history of America? It’s actually going to be interesting to see.

But yeah, probably can’t be President and palling around with former KKK dudes. I’ll go out on a limb and say that. Clayton Bigsby excluded of course, he seems like a real salt of the Earth type dude who’d fit in with the people Glenny Balls was talking to in Times Square last night: