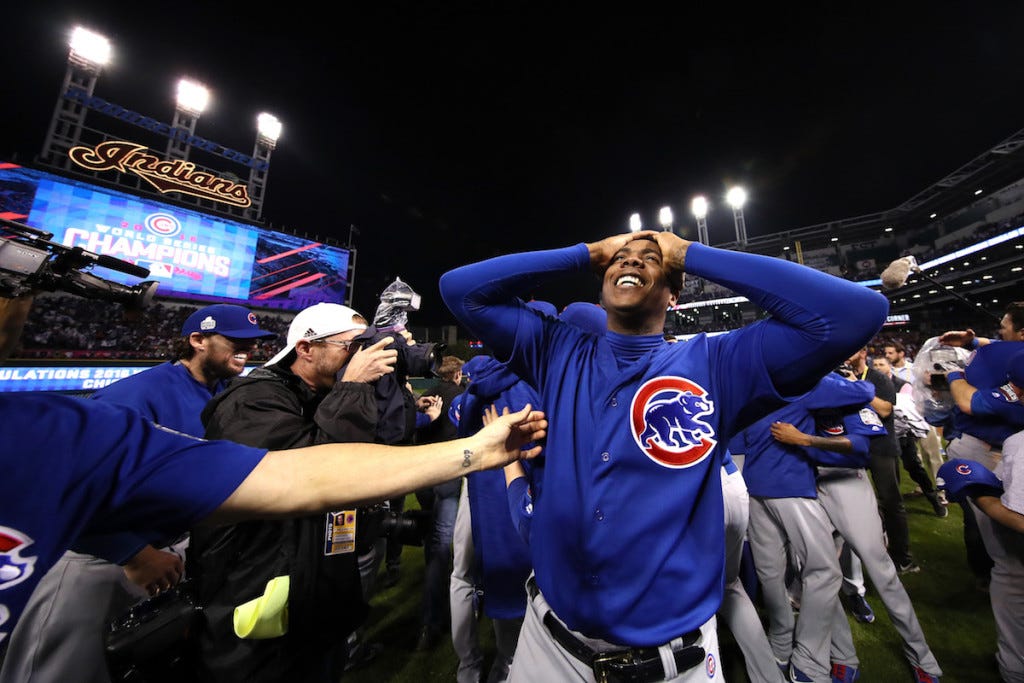 If you watched the Cleveland Indians this past postseason, then you understand just how important it is to have a great bullpen. This offseason, 29-year-old Kenley Jansen, and 32-year-old Mark Melancon are among the top free agent closers on the market. Atop that list, though, is World Series champion and four-time All Star Aroldis Chapman. Chapman spent parts of six seasons with the Cincinnati Reds before being dealt to the Dodgers in a deal that fell through last winter, was then traded to the New York Yankees, who then flipped him to the Chicago Cubs prior to the deadline this past summer. Now a free agent, Chapman is looking to cash in BIG time.

Chapman is looking for $100 million, said one plugged-in agent posted up at the Omni Scottsdale Resort & Spa during the general manager meetings. If Chapman’s camp can draw the New York Yankees and Los Angeles Dodgers into a bidding war, then maybe the 100-mph closer gets a five-year deal and doubles the $50 million guaranteed the Philadelphia Phillies would regret giving Jonathan Papelbon after the 2011 season.

Shoot for the moon, my man. Shoot for the moon. MLB Trade Rumors predicted that Chapman will return to the Yankees on a five-year deal worth $90 million, so I suppose that $100 million asking price isn’t as crazy as it first appears. It’s obviously unprecedented, given that the most lucrative deal ever given out to a reliever was when the Phillies signed Jonathan Papelbon to a four-year deal worth $50 million, which included an option for a fifth year. Papelbon agreed to a reduced rate on that $13 million fifth-year option if the Nationals agreed to pick it up immediately upon being traded to Washington, which brought the total value of that contract to $61 million over five years.

Since the start of the 2012 season, there have been 67 relievers who have made at least 250 appearances out of the bullpen. Chapman is first in ERA (1.84), first in strikeouts per nine innings (15.67), first in strikeouts (546), second in saves (181), and fifth in WHIP (0.94). His fastball has also averaged over 101 MPH twice over the last three years. The one time that it didn’t was in 2015 when it averaged 100.43 MPH. According to FanGraphs, Chapman has been worth an average of $20.9 million per season over the last three years. Over the life of a five-year deal, which Chapman wants, and is projected to receive, that equals out to be $104.5 million. So, a $100 million contract is a bargain!

Nah, that’s a shitload of money for a reliever. It is. But, he could very well get it, and he could realistically be worth it. And with the Yankees being one of the teams who very clearly wants to sign Chapman, it would not surprise me at all if what he actually signed for was in the neighborhood of that $100 million that he’s seeking. While there’s certainly risk involved in any long term deal regarding a relief pitcher, given their tendencies to be hit or miss year to year, Chapman’s obviously a special talent that’s been gifted with the ability to throw fastballs harder than anyone else on the planet. That, and a five-year deal would only take Chapman through his age-33 season. Consider that next year will be Andrew Miller’s age-32 season, and you can feel pretty good about committing five years to Chapman.