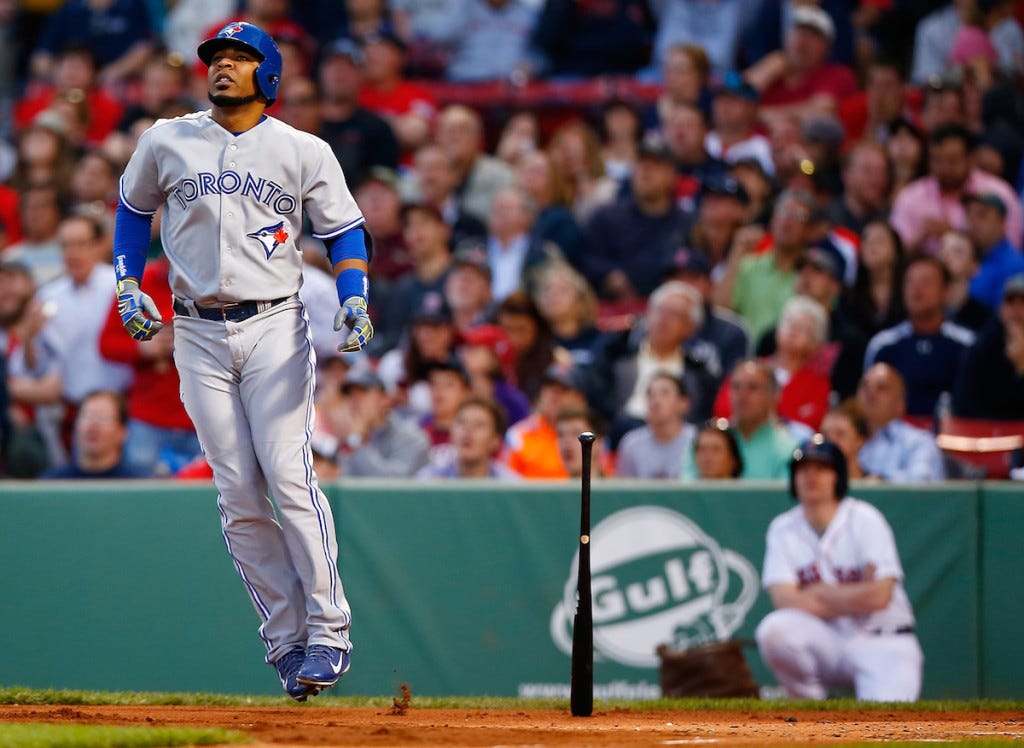 The offseason isn’t even a week old yet, and we’re already deep into the whole agents feeding the media bullshit game. I love it.

Yesterday, Edwin Encarnacion’s agent floated that his client is looking for a five-year deal worth $125 million, and that roughly ten teams are interested. I wrote it yesterday, but it’s worth repeating — there’s no way that ten or more teams are interested in a 34-year-old first baseman/DH that’s going to cost over $100 million, who also will cost a draft pick (unless theirs is protected). The whole theme of what I wrote yesterday is that the Blue Jays are pretenders. They’re going to pretend to make an effort to re-sign Encarnacion to appease their newly crazed fan base, but they’re not going all in to bring him back. Why? Because they cheaped out on Encarnacion this past spring when his number was likely lower, so they’re not going to magically decide to splurge now that the price tag is higher.

“He loves Boston,” the agent said. “You look at his highlights from last year, I think five of his home runs were hit there. He loves to hit there. The atmosphere … That’s always one of his favorite road games.”

For what it’s worth, Encarnacion has hit .286 with an .892 OPS, 14 homers, and 3 doubles at Fenway Park in 189 career at-bats there. If you’re keeping score at home, that’s a home run once every 13.5 at-bats. That’s great and all, but I’m not signing Encarnacion to a five-year deal. You can fuck right off with that. Yeah, David Ortiz performed at an extremely high level until he was 40, but he was a freak a nature that you can’t use as a benchmark. That’s like saying you need to get 300 innings a year out of your starting pitchers because Nolan Ryan used to do it. Some guys are just different. You can’t bank on Encarnacion still being productive in his age-36, 37 and 38 seasons, which would fill out the backend of a five-year commitment, with an average annual value of $25 million.

MLB Trade Rumors released their annual free agent predictions yesterday, and they have Encarnacion signing with Boston for $92 million over four years. That’s an AAV of $23 million, but I’m not even concerned about the dollars. A four-year deal would have him signed through his age-37 season, which is unquestionably a big risk. Yesterday at the GM meetings, Dave Dombrowski seemed reluctant to commit to one single player at the DH position over several years.

“I’m not sure if we’re going to do it internally with a lot of the people we have or go outside the organization,” Dombrowski said. “We know we can never replace [Ortiz’s] presence. But we have a lot of guys who can play different positions. We have young guys coming that we like a great deal, so we’ll just kind of have to wait to see what happens there.

“There are a lot of different factors. One is affordability, but not only that. How long do you want to tie somebody up for that position when we have a lot of young players coming? That’s a very important part of it.”

As of now, there are already reports that the Red Sox have shown interest in 39-year-old Carlos Beltran, and they’ve also reportedly reached out to 33-year-old Kendrys Morales. Beltran wouldn’t cost the Red Sox a draft pick, because he was traded mid-season last year, and the Royals did not make a qualifying offer to Morales, so he wouldn’t cost a draft pick, either.

If I’m the Red Sox, the idea of signing either Beltran or Morales is intriguing because A.) It would be a shorter commitment, and cost less money, and B.) They’re both switch-hitters. However, I wouldn’t go too crazy over the lefty/righty aspect of who your new DH should be, because that Blue Jays lineup has been mashing for a while now, and they’re very, very right-handed heavy. Encarnacion had an .881 OPS against right-handed pitching this year, and a .902 OPS against lefties, so that doesn’t really matter at all in Encarnacion’s case. It’s the length of the deal that I’d be most concerned about, and it sounds like Dombrowski feels the same way.