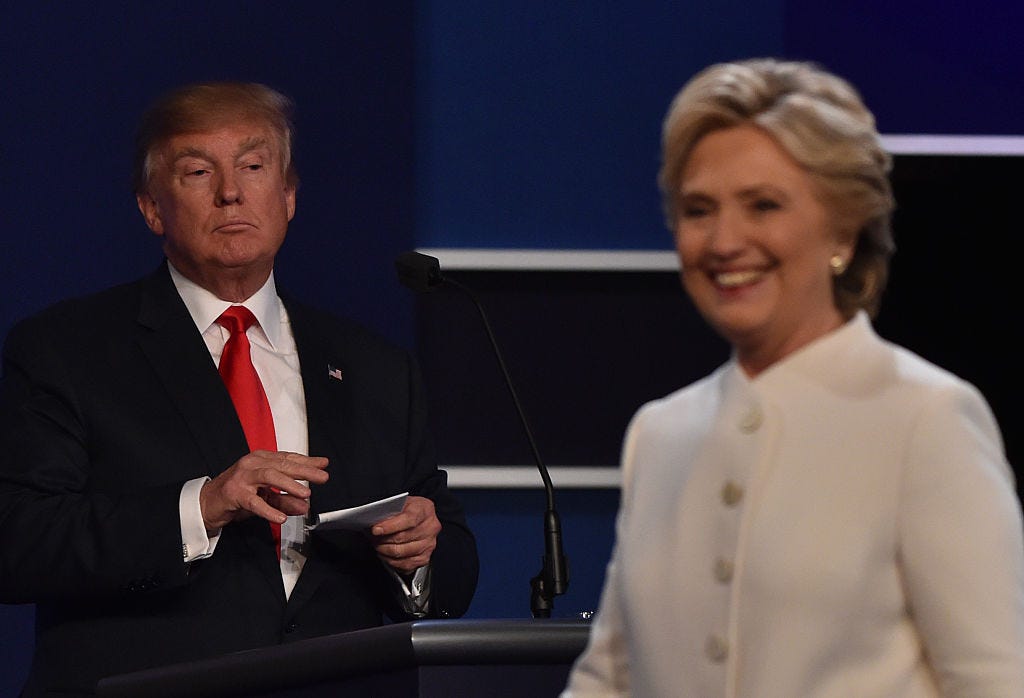 We’re finally here. Election Day 2016. All the dweebs walking around with their I VOTED stickers, all the networks including BNN with their countdown to coverage, and Riggsy with his prop bets. These are fun to ponder, make a call either way, and throw some coin on. Spice things up a little bit — everybody likes a little spice.

Tough one, great o/u line. I essentially have Trump at 22 states before we even tee off. Hillary at 16, and 12 up for grabs. You add Ohio, Iowa, and Arizona and we’re at 25. Can he snag one of the other swing states? That’s the big question.

I say yes, but I think it’s reallllly close. Over 25.5 for the Donald but not putting the farm on it.

This all comes down to Florida. Hillary can easily win the election without it, but if she grabs it we’re gonna have an Electoral College landslide. Five Thirty Eight has her at 55% chance of winning the sunshine state, but they’ve been wrong a billion times and switch these every day.

If Trump loses Florida it’s over before it even starts and Hillary blows past 299.5. Obviously Florida is Florida so this will be a disaster and take long into the night to figure out — but I think Trump snags Florida and Hillary comes in under 299.5.

What will the voter turnout be for election — Over/Under 58.50%

Democratic. No brainer. Even if Trump wins, which he could, he’ll lose the popular. You can make up a few margin of error points in a few states and sneak in an Electoral College dubya, but tough to overcome a 4-6 point national deficit.

I know the odds aren’t great but might have to go BNN here. I honestly might call the election in my opening monologue tonight — if it’s correct, great; if it’s wrong, even better. #BarstoolElection #GeauxRiggs

Over. The election was called as early as 11:12 for Obama in 2012. I think it’s going to be a little closer and a little more reliant on swing states in western time zones this year, and Florida always takes extra time to get their shit together, so after 11:05 is the winner.*

*Disclaimer: If North Carolina is called early for Hillary, it’s over early.

Not within 1 hour and it’s not even close. Might not even be within a month or a year or a decade. In fact I’d love to see the odds on Trump not conceding in the year 2016 (if he loses).

First Oak & Coke hits the lips at 7:30, when we go live, and I’ll be tipping back delicious Oakheart throughout the night (Chaps already pulled me aside to confirm that we’re “tying one on” tonight).

Anticipating the coverage goes from 7:30 – 11:30 ish, that’s 4 strong hours of consumption. 2-3 per hour puts us right around the double-digit mark and I drink way, way, way faster when I’m nervous. Think 11.5’s the right line.

Those are the best and most juicy props I’ve seen thus far. Our #BarstoolElection coverage tonight is going to be so comprehensive that we’re doing pre-production meetings and rehearsals today. Wild shit, going to make it that much funnier to us/devastating to Tech Guy Pete when the show inevitably implodes upon itself like a dying star.