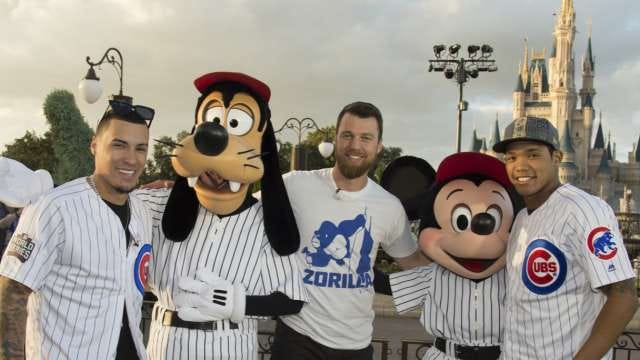 The social scene is really starting to pick up for your 2016 World Series Champion Chicago Cubs. The fact that the rest of the world is really starting to get to know these guys is special. You know it, I know it – this is probably the most likable team in the history of professional sports. So yes, very glad that non-Cubs fans can get a piece of the action.

Last night featured two separate appearances for the Cubs: Kris Bryant with a solo shot on Jimmy Kimmel and then the trio of Rizzo, Fowler and Zobrist on Fallon. Both electric spots for different reasons.

1. Bryant Meets The Crying Fan: Bryant is flat out made for High Definition viewing. The guy is flawless. He can beat you with the long ball, beat you on the bases, beat you with his eyes and isn’t afraid to shy away from perfectly manicured facial hair. He even looks good in a suit from Express, which I had previously thought was impossible. KB has all the tools.

2. Superstitions and The Rain Delay: Fallon talks a lot more than he needs to, especially hosting the 2016 World Series Champion Chicago Cubs. But this is still remarkably entertaining. Bonus points to Fowler for very, very lightly touching up on some of the “emotions” floating around the clubhouse in the Game 7 rain delay. In other words, I’m fairly certain literally every single guy in the dugout wanted to kill Joe Maddon. And I’m extremely certain that “team meeting” in the weight room was more or less Heyward/Rizzo making sure no one actually did kill Maddon. The good news is it worked. The better news is that means one day we’ll get to hear the full story. For now, enjoy the fucking clip.

3. Parade and a Dynamite Bartman Joke From Dex: I think Ben Zobrist is sneaky perfect. I also think Rizzo’s reaction to Fallon suggesting they bring back Bartman is pretty much everything you need to know about Anthony Rizzo – the guys is so genuinely kind and sincere. Yeah bring Bartman back he’s a huge piece of Cubs’ history. That’s not PR. That’s just Anthony Rizzo being Anthony Rizzo. Fucking love this guy.

PS – I miss you already Dex.