Jesus, Mary, and Joseph. You had to know that this may be coming after Steph went 0-for-10 from 3-point range against the Lakers on Friday and snapped his 157-game streak of hitting a 3. Simple math, science, or whatever black magic Steph Curry does could have told you that. Or as Big Cat harped during the entire postseason, water always finds its level. And in this case, that water had a tiny battleship sailing on it that blew a hole through the Pelicans. But that was ridiculous. Being in the zone is just an incredible, indescribably feeling for a schmuck like me. I can’t even imagine what it’s like being Regular Steph Curry, let alone In The Zone Steph Curry. Steph must see the Matrix like Neo when he becomes piping hot. After hitting 12 3-pointers twice in his career, it just seems right that he is now the sole owner of the record. What a shot chart. 13 of 17 from three! Unreal. 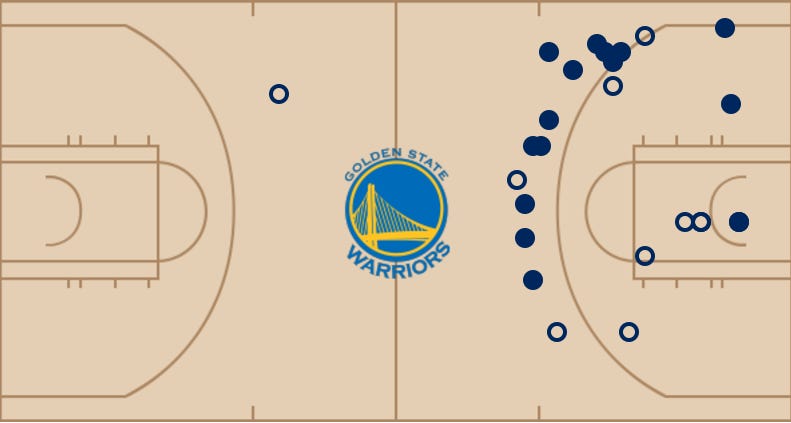 Can’t believe he missed the three-quarter court shot if we are being honest.

But the craziest thing about those highlights isn’t even the record. It’s the way Steph hit the shots. Like half of those threes were off of loose balls or with a player all in Steph’s kitchen. How are you supposed to defend a player like that? Guarding Steph Curry behind the arc is harder than sticking to a diet when you are in the fantasy world known as Barstool HQ. Every day there’s a new batch of snacks, candy, and take out. Steph Curry isn’t even fair man. After the ugly shoes, the mouthguard throw, the ugly end to the Finals, and the new mountain of hate piled up against the Warriors, it was nice to see Steph Curry doing Steph Curry things again.

And considering that Klay is shooting 21% from 3-point range to start the season, he may not miss a 3 for like 5 games in a row. The Warriors are going to do some absolutely ridiculous things this season. And since last night was Steph’s night, you know what that means!