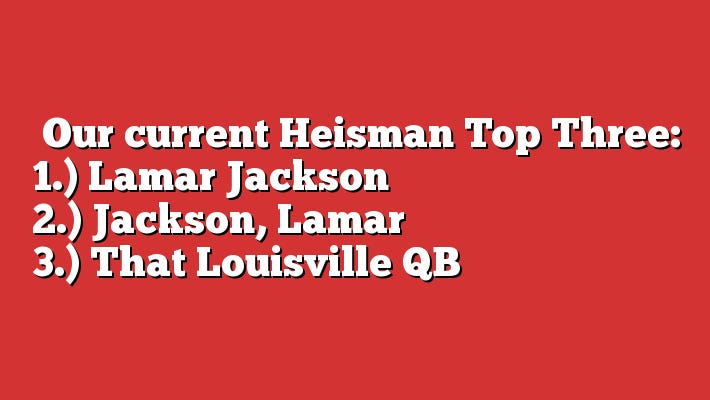 This shit is over. I hear the fat lady singing. Say good night. Jackson put Jabrill Peppers, Deshaun Watson, Jake Browning, and J.T. Barrett in their place after what he did to the Boston College Football program. 12 of 17 passing, 231 yards, four passing touchdowns, 185 rushing yards and three more touchdowns on the ground. Stupid.

This was his THIRD game with seven or more touchdowns this year and he is now on pace for 60 regular season touchdowns. 60!!! He would fall three shy of Hawaii quarterback Colt Brennan’s 63 touchdowns, but let’s not forget Brennan played in the WAC where the competition is nowhere near the ACC level. I got a little nervous last week as the odds were coming down as Peppers and Watson were gaining steam, but Lamar took them to the woodshed this weekend and murdered them in cold blood. Jackson’s odds currently sit at -2000 to win the Heisman. That is insanity!! But it’s Vegas’s way of telling us nobody else has a shot in hell besides Action Jackson.

More importantly now, we need this motherfucker in the college playoff. How can we not have a potential 60 touchdown man competing in January for the ship. Let’s how his chances look…

With Texas A&M losing this weekend they are thankfully out of the picture. Presumably Washington will slide into the 4th slot, for now, while Ohio State and Louisville will move up to the 5th and 6th positions respectively. The last game of the season, Michigan-Ohio State, will unofficially be a playoff to get into the the playoffs. I’m going to assume Clemson and Bama are going to win out and be in safely, so that leaves us with either Washington or Louisville for that last spot. Washington has a tough season finale coming up when they visit rival Washington State to see who represents the PAC 12 North in the PAC 12 Championship Game against most likely Colorado. So Washington probably has to win out to get into the final four. I can’t see how the committee would put them in with a loss. So what I’m saying is that Louisville has a legitimate shot and I hope they get in. Who do you think is hoping they don’t get in? That would be Nick Saban, who probably would have to dance with Lamar in the opening game. The Cardinals are the scariest team outside of the picture currently, and they have to thank their Heisman winner for that.