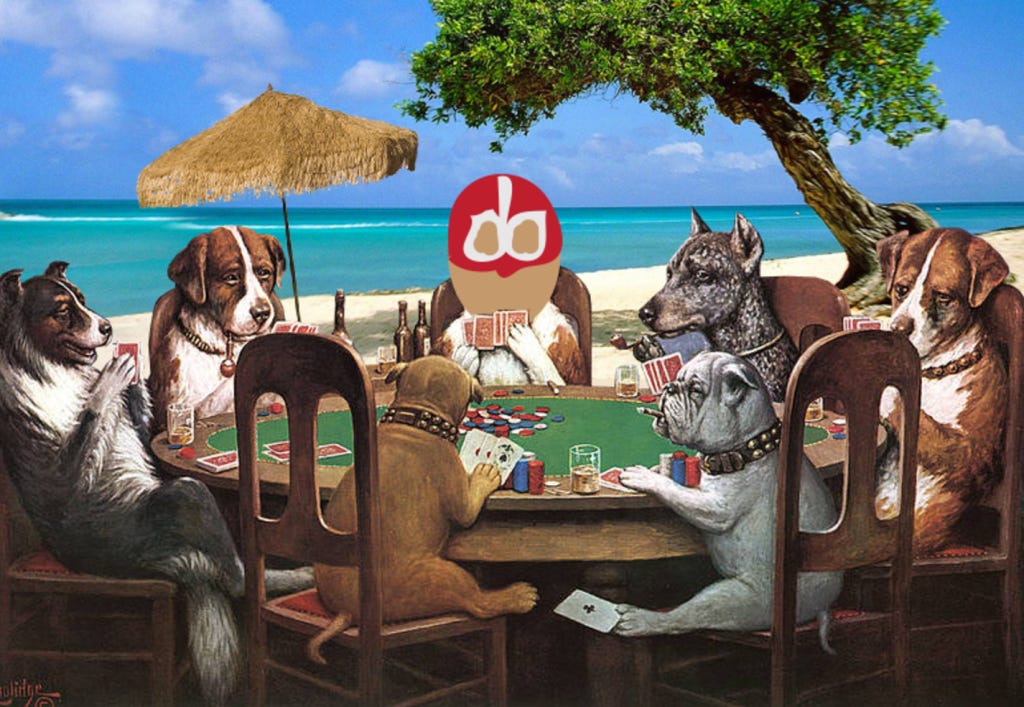 As you may know, I’ve been in Aruba since Friday, as I won a trip down here in a poker tournament. The package I won included hotel, some of the airfare, a $2400 poker tournament, and $300 towards another poker tournament of my choosing. (All the background on this can be found here)

The main event started on Friday, and it was rather uneventful. I made day 2 of the 3 day tournament, but busted out early from it. Never really got much going on either day, was pretty card dead, and ended up running pocket 4’s into pocket kings to meet my demise.

The good news though is I’m in Aruba so like… 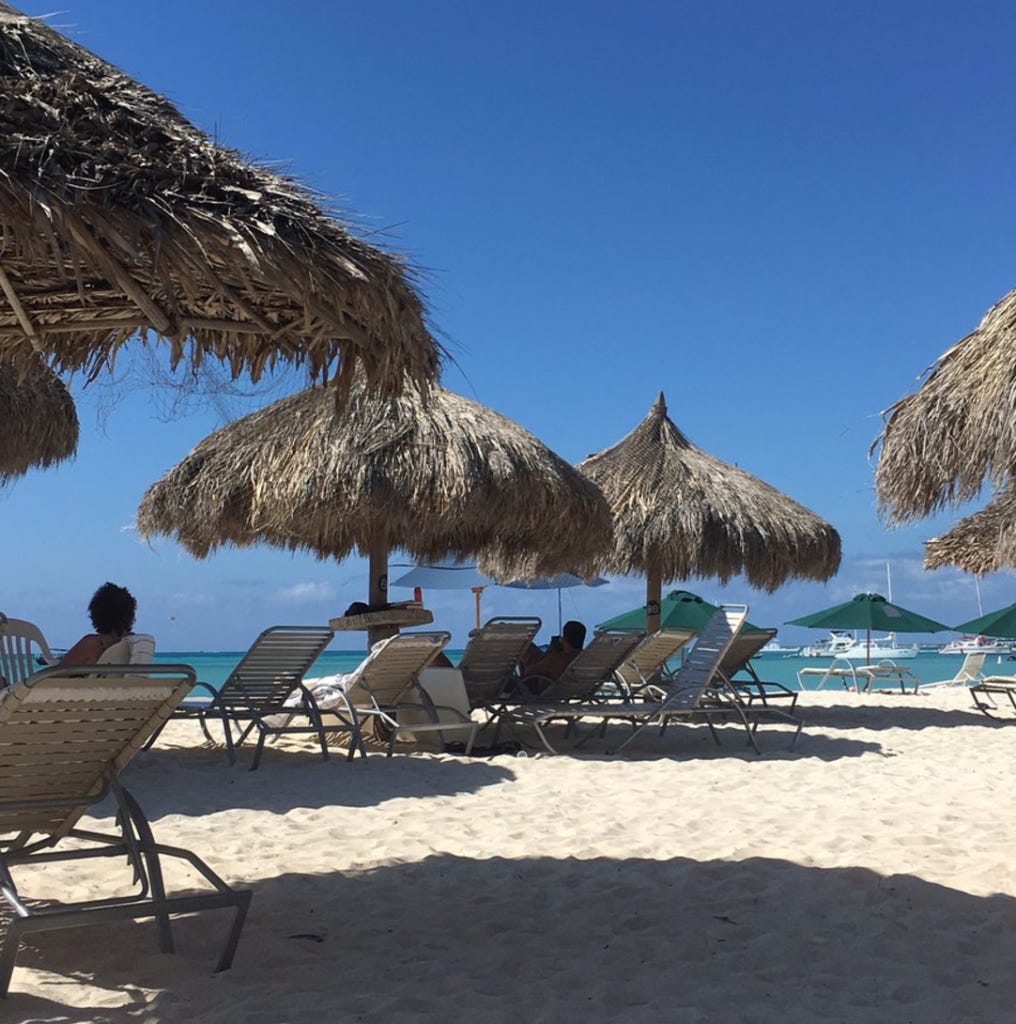 Yeah, this place is pretty nice. The water is blue and warm and it’s been 88 and sunny every day. Unfortunately for your boy, I forgot I spend every waking minute of every single day hunched over my computer far away from sunlight, so I got super sun burned and couldn’t go outside today. So after some napping and some fresh fish and shrimp tacos, I decided to pull the trigger on this $500 tournament they had running tonight. The cool thing about the tournament is it was a bounty tournament, which meant from each player’s $500, $200 went to the prize pool, and $200 was each player’s bounty, meaning if you knock someone out, you collect $200 in cash. And let me tell you what, boy did I ever.

I took a pic of each one for the #content on Twitter, and overall I busted 11 different players for $200 bucks each. Considering 98 players started, I busted over 10% of the field, which is, in so many words, banana land. 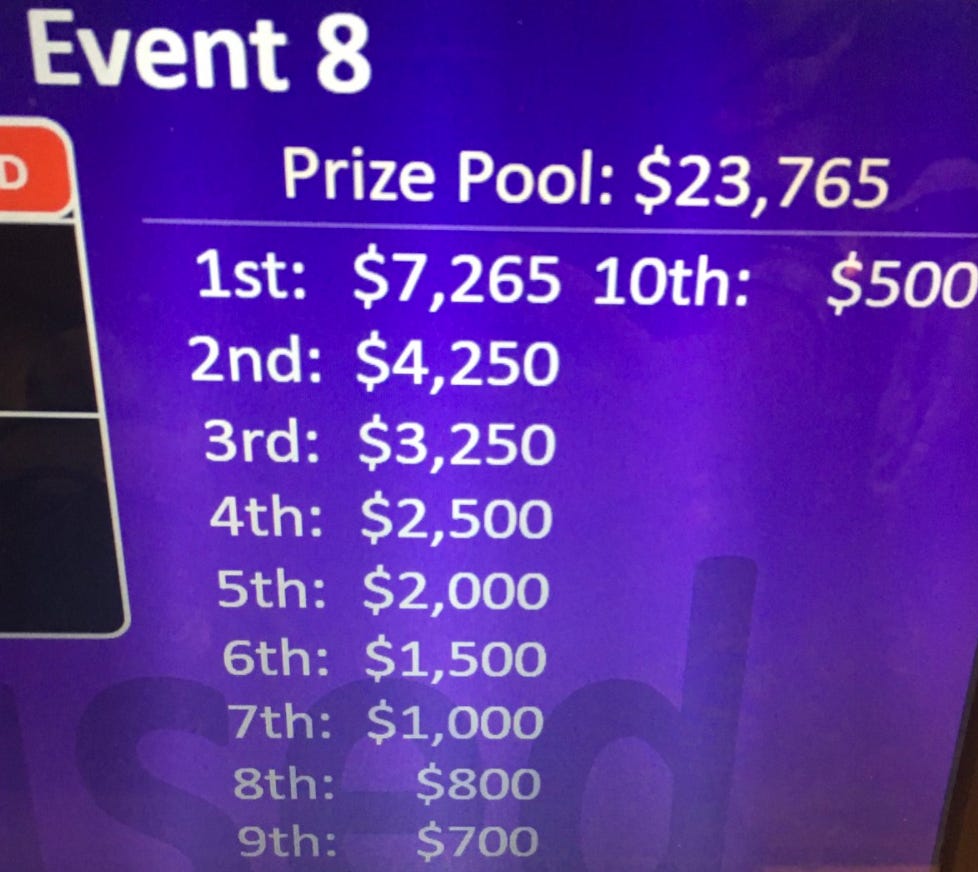 As we reached the final table, I think I was 4th or so in chips out of 10. Everyone was very short on chips as the the blinds went up quite quickly. The good news is I had more experience playing turbo poker tournaments than any of the players combined at the final table. And boy, they were bad. I knocked out 2 more players at the final table, but eventually met my maker in a stupid spot where the short stack was all in for his final 3 big blinds, the big stack went all in, I called with pocket 8s, and lost to the big stack’s AK. So I didn’t get the win, which was unfortunate, but I collected $3250 for 3rd place, but another $2200 in bounties. Not the worst night, eh? Can’t wait to make it rain (on them student loans) bitches!

And oh yeah, of course the guy who had 25% of my previous final table (the Maryland one for 13k where I qualified for Aruba) also had 25% of me in this. I’m not sure if his money is good luck or what the deal is, but he’s also at the main event final table going for first place and $133,000. Good luck @realcharder30 I hope you play as good as you look while getting massages 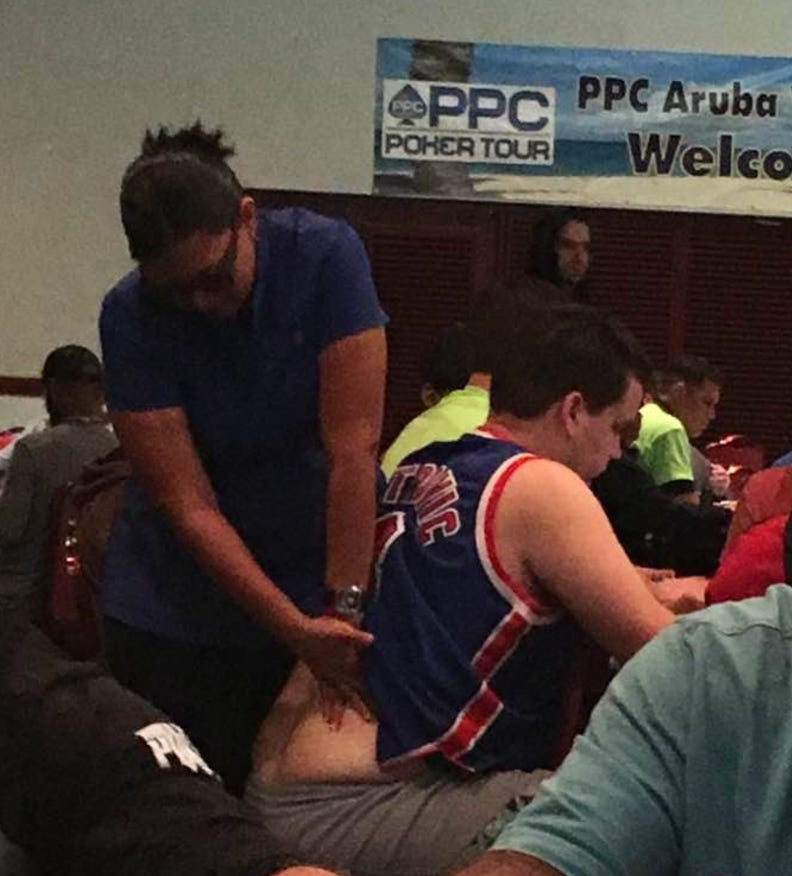 I’m still red as a strawberry (that sun is a mighty powerful bitch down here near the equator and I obviously didn’t bring sunscreen), but I think today’s plan is to drink bloody marys on the beach and watch my coworkers run on a treadmill.

PS: lots of sweet people sent me good luck tweets on Twitter. Thanks for the support, it’s pretty cool I get to live one dream (poker) while doing the other (blogging from my mother’s basement).

PS: Portnoy is definitely never going to play me heads up now. He’s been dodging it forever, now there’s no chance.