The dust has settled. The parade has ended. The Curse is over. The Cubs are World Champions. The Indians will hang an American League Champions banner, and Rajai Davis’ and his incredibly clutch game tying home run over Aroldis Chapman in the bottom of the 8th becomes nothing more than a footnote. A piece of history that Indians fans will remember forever and most likely, nobody else. As time goes on the name will be forgotten and that moment, as monumental as it was in real time, will be a trivia question that stumps people for eternity. Rajai Davis’ mom probably wont even remember it in a few weeks.

Its the latest in a long line of major moments that end up getting thrown out with the trash because their team couldnt finish the job and follow it up with a W. If the Tribe wins that game, its one of the most clutch home runs in baseball history. Its the HR that kept a 108 year streak alive. Rajai Davis and the Indians are not alone though. These are some more of the biggest and best forgotten moments in sports history. Its funny – when trying to think of this list, all of the moments you think of are plays that happened to you and your teams, or ones that stick out to you personally. Obviously. Because the rest of them are…forgotten. So I’m sure there are plenty more. Sound off on the ones that you have never forgotten even though everyone else has.

The greatest leaping catch I think I’ve ever see. That ball was not only beyond the wall but it was like below the wall. Endy flashed like a 60 inch vertical, with impeccable timing and his rubber arms reached all the way back and he snowconed that ball like he had Angels in the goddam Outfield helping him. He doubled off Jim Edmonds who was basically throwing a party on the basepaths already assuming it was gone. If the Mets go on to advance to the World Series, thats the best defensive play in postseason history. They didnt. The lost. So now its just something that Mets fans always recall fondly.

Even if the stakes werent impossibly high – 4th quarter, a minute to go in the Super Bowl – Jermaine Kearse’s circus catch should still be remembered. The juggling act had the entire stadium, the broadcast, and everyone at home duped. Nobody intially thought that was a catch except for Jermaine Kearse. The Seahawks run that ball in to win their 2nd Super Bowl and hand the Pats their 3rd Super Bowl loss and Wilson To Kearse is an all timer. Instead I had to google “Seahawks Super Bowl Catch” to remember who it was.

Any time you get Michael Jordan reacting like this:

You deserve to be remembered forever. A double clutch three ball on the biggest stage in that Tar Heel blue is an all time bucket. ONIONS. But Kris Jenkins out-onion’d him and so Marcus Paige takes the L and only MJ gets remembered.

The year was 2001. America and New York City had been rocked by the worst terror attack on US soil ever. It was game 7. A 1-1 pitchers duel. Soriano goes big fly in the 8th and the Yankees have the greatest closer of all time BY A MILE, in his prime, waiting to finish the job. If the Yankees win THAT particular World Series, its their 4th in a row, it lifts up all of America (except for me and Mets fans) and Alfonso Soriano is a Yankee LEGEND. Instead Tony Womack and the infield in for Luis Gonzalez gives the D’Backs the World Series and Buster Olney is writing books about The Last Night of The Yankees Dynasty. What a swing.

Aaron Rodgers Hail Mary At The End Of Regulation vs the Cardinals, Loses In Overtime

Aaron Rodgers drops back, spins away from this throwing arm, awkwardly launches one a billion yards and forces overtime. The Packers went on to lose and so the thing I remember most from that came was the Coin Toss that didnt flip. I remember the Crying Face Jordan on the coin more than the Hail Mary

This one is TRULY forgotten. Not for a billion dollars could I have come up with Sean Woods on this one. A wild, ill advised, Hail Mary floating bank shot runner over 7 foot Christian Laettner in overtime of the Final Four. If Grant Hill doesnt make the best inbounds pass ever and Christian Laettner doesnt use his Flash Man powers from Mega Man 2 and somehow make 2.1 seconds enough time to dribble, turn, and nail that shot, Sean Woods and UK go on to that title game and “The Shot” might belong to him.

The Reverse – Memorable moments from losers

Has there ever been a more famous World Series home run that technically didnt matter? Its funny because obviously the Sox curse wasnt broken until 2004. Obviously the Red Sox didnt win the 1975 World Series. But we’ve all seen Pudge Fisk wave that ball fair so many times its like your brain automatically assumes it was a home run that helped win a World Series trophy. Nope. 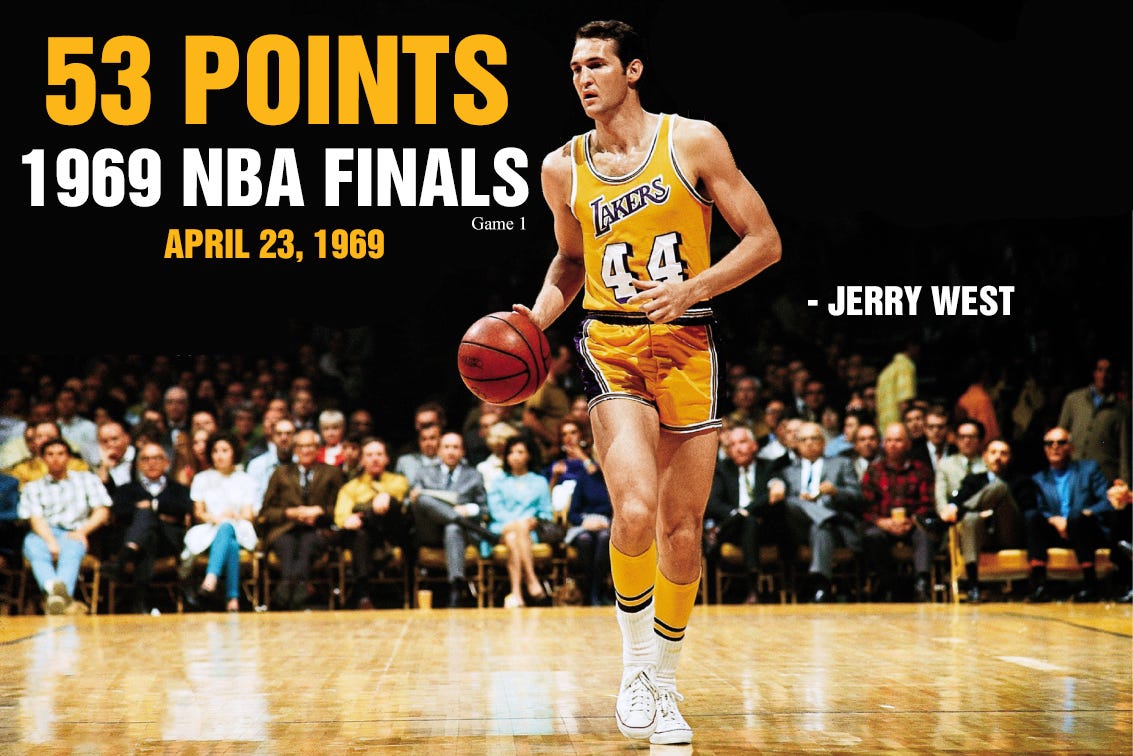 In my head, the most memorable loser ever. 53 points in game 1. Averaged 38 for the series. Put up a triple double in game 7. Couldnt tell you anything about the Celtics winning it that year. Not sure where in the 8-peat timeline that fell. Not sure who played great on the winning end. But I know Jerry West won the MVP as a loser. (PS – Had Lebron forced game 7 in their first showdown with the Warriors I think he would have been the second guy to do it)

Feel free to chime in with other examples of incredible sports moments erased by a loss. Like I said you can only remember the ones that affected you personally or jumped out in your mind. So I’m sure there are plenty more.