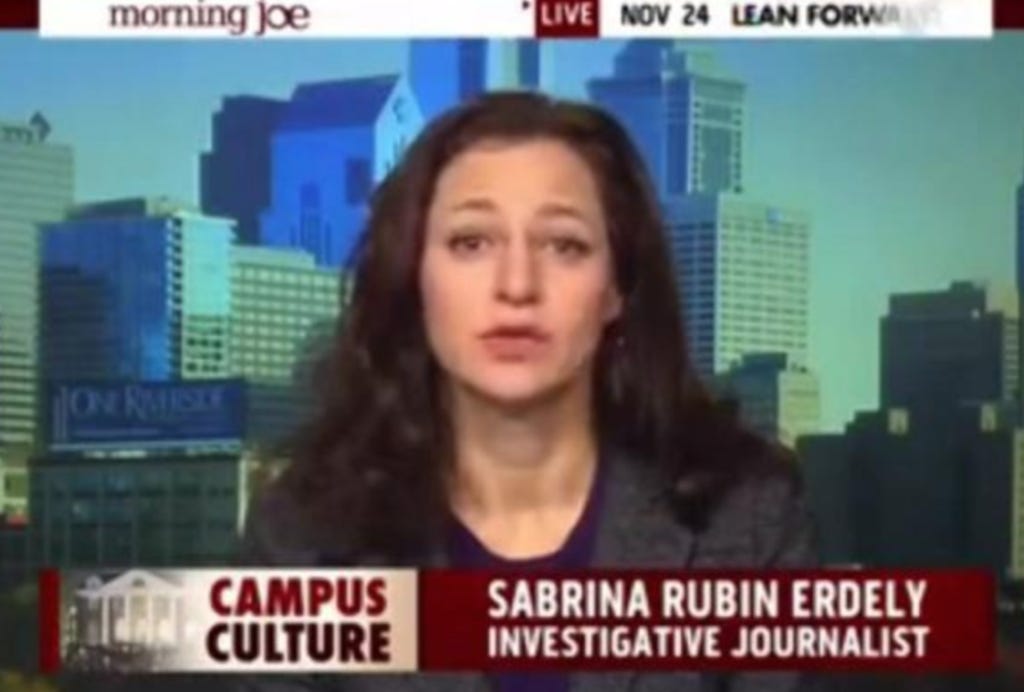 CHARLOTTESVILLE — A federal court jury decided Friday that a Rolling Stone journalist defamed a former University of Virginia associate dean in a 2014 magazine article about sexual assault on campus that included a debunked account of a fraternity gang rape.

The 10 member jury concluded that the Rolling Stone journalist was responsible for defamation, with actual malice, in the case brought by Nicole Eramo, a U-Va. administrator who oversaw sexual violence cases at the time of the article’s publication. The jury also found the magazine and its publisher responsible for defaming Eramo.

The $7.5 million lawsuit centered on the 9,000-word article written by Sabrina Rubin Erdely titled “A Rape on Campus.” The article appeared online in late Nov. 2014 and on newsstands in the magazine’s December 2014 issue.

The case continues this week as the jury will consider damages and hear additional evidence from Eramo and her lawyers about how she was affected by the actions of Rolling Stone. Eramo originally asked for $7.5 million but can ask for a different sum after the verdict.

Haven’t felt a rush reading a verdict like this since the Hulkster wiped Gawker off the map.

Feelings summed up in Tuesday’s blog: here. Reposted below- 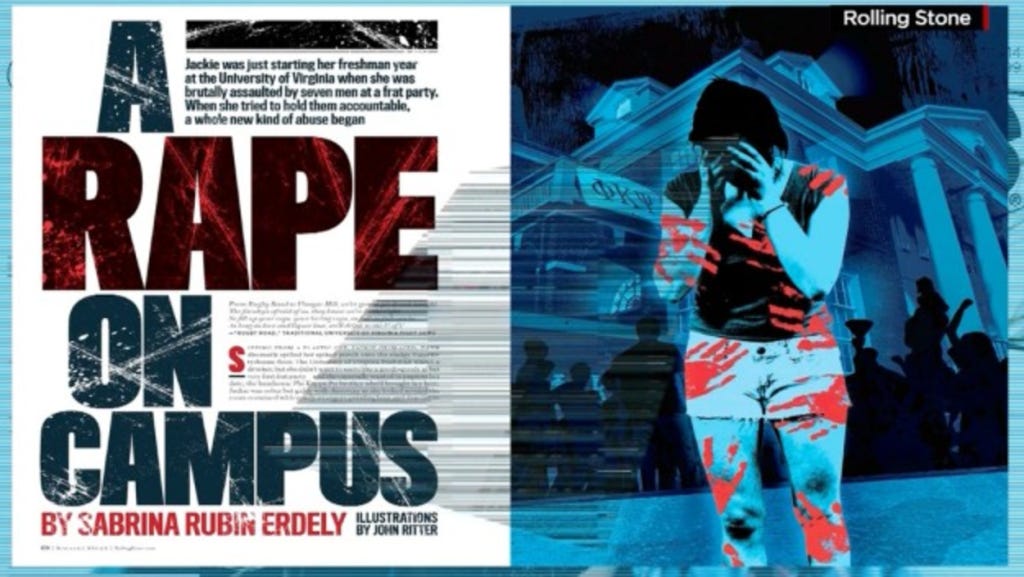 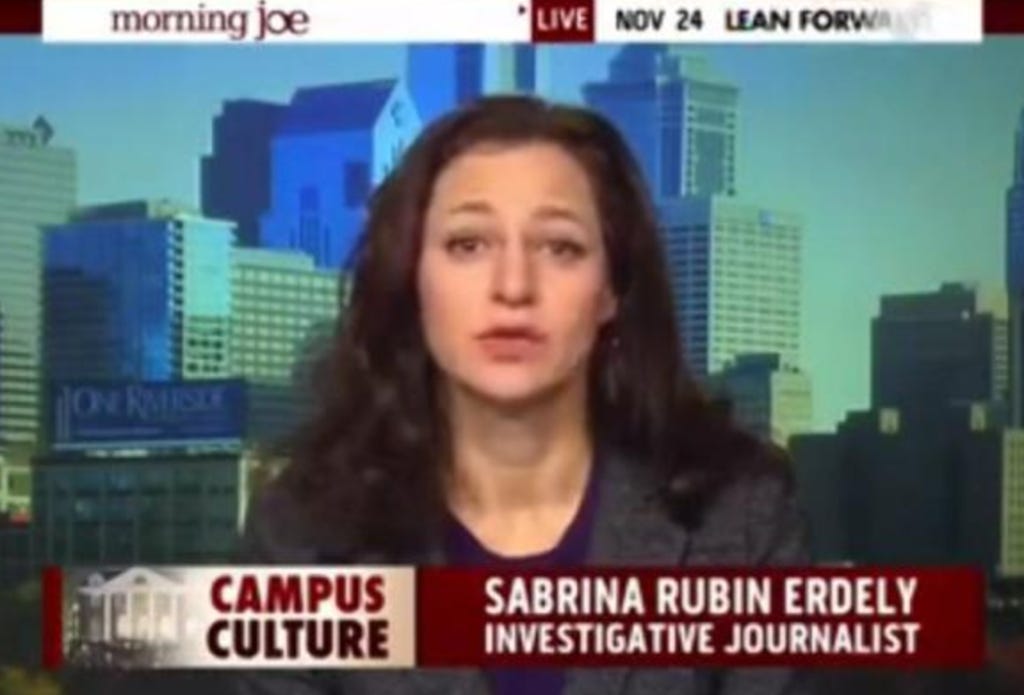 CHARLOTTESVILLE, Va. (WVIR) – The author of the retracted Rolling Stone article continued to testify in defense of her reporting in a defamation lawsuit during a Saturday session of Federal Court in Charlottesville.

Sabrina Erdely is defending her reporting for “A Rape on Campus” published in November, 2014. Erdely, Rolling Stone Magazine, and its publisher are facing a multi-million-dollar lawsuit from Former University of Virginia Associate Dean, Nicole Eramo.

In the article, a UVA student referred to as “Jackie” described being gang raped at the Phi Kappa Psi fraternity house at UVA in September of 2012. Details in the article did not hold up under scrutiny by other media organizations. An investigation by Charlottesville police in 2015 found no evidence to back up the claims made in the article. Rolling Stone Magazine retracted the article and apologized.

No seriously, Columbia University, ever heard of them? They called it literally the Worst Journalism of 2014. A story that didn't use "basic, even routine journalistic practice." 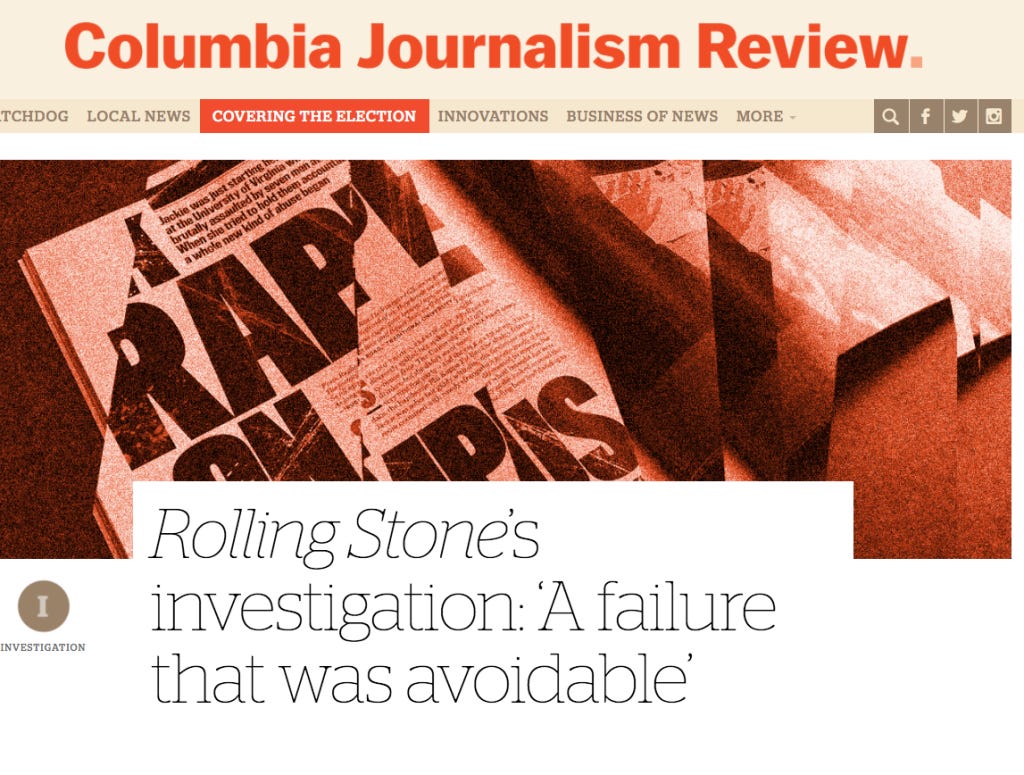 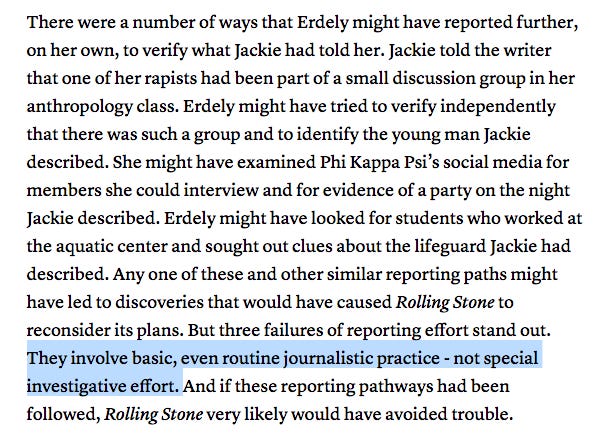 It was the Poynter Institute’s Error of the Year. 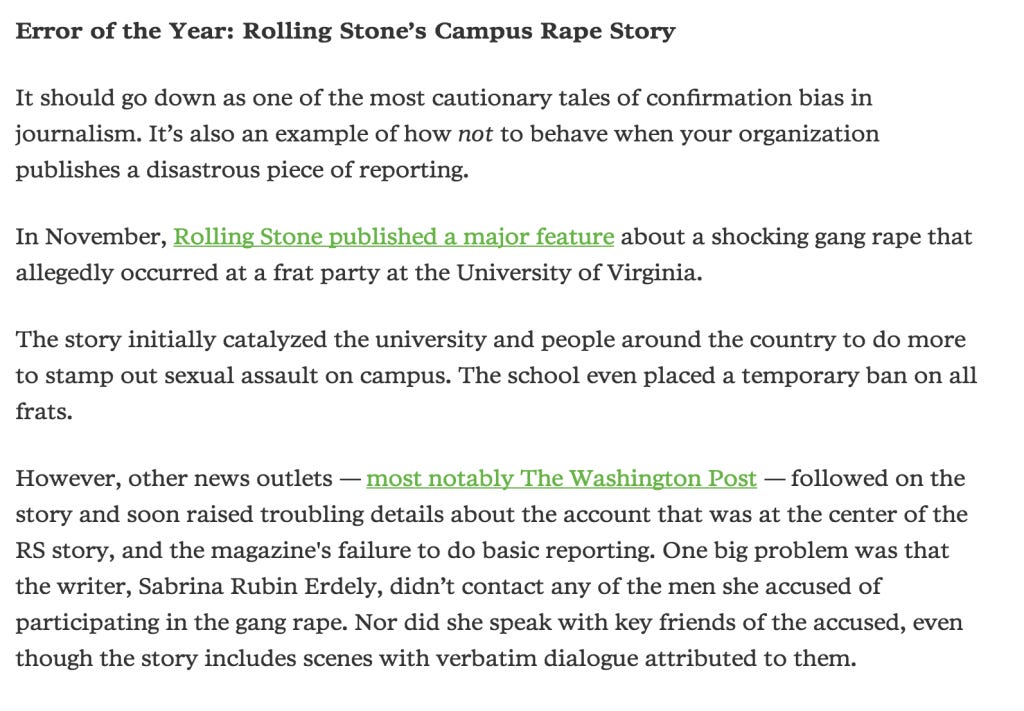 The Washington Post dove deep into it and did some actual reporting and found out that there’s a good chance the entire thing was made up as a catfish revenge plot.

But everyone kept all that a secret from Sabrina Erdley apparently.

On the stand Saturday, Erdely recalled the night she, Jackie and others walked by the Phi Kappa Psi fraternity house, when Jackie broke down and had to leave. Erdely testified, “I knew it was genuine.”

Investigative journalist for a music magazine by day, also clinical psychologist by day.

Defense attorney J. Scott Sexton, who is cross-examining Erdely, asked how she feels now knowing it was not true. Erdely testified, “It makes me confused,” adding “I don’t know what happened to Jackie. I feel certain something happened to her.”

The questioning turned to an interview Erdely conducted with Jackie’s roommate to confirm Jackie’s depression story described in the article. During the interview, Soltis told Erdely Jackie’s rape happened in her 2nd year, not her 1st; it was oral, not vaginal; and six men, not seven men, as Jackie told Erdely.

Erdely testified it’s not uncommon for trauma victims to get details wrong. She said that Solstice did not think the discrepancy was significant, and neither did she.

My favorite part about the American system is that we have have police who investigate things like this and don’t rely on Sabrina Erdely’s personal thoughts and intuitions.

So just to recap the story that she stands behind so much:

Erdely didn’t talk to Jackie’s friends who comforted her after she was assaulted. She asked Phi Kappa Psi “for comment” but didn’t give them enough info to actually let them defend themselves against the allegations. She didn’t name or talk to “Drew,” the guy who led Jackie’s “attack.” (A week after the story was published they STILL couldn’t verify that he was even a real person that existed). Her editors didn’t make her get any more information to fill in any of gaps. The story didn’t touch on anything Erdley wasn’t exactly clear about or where a lot of the “facts” came from. The story’s fact-checker noticed some errors with the reporting but was basically scared of reporting it to the boss.

Add that all up, put in a blender, boom out comes a 20 billion pageview article. Click click click. Who gives a shit who it hurts? Certainly not Sabrina Erdley who collected her paycheck, promptly went on any and every TV show that would have her, retweeted every single person who said a nice thing about her article, then poof, didn’t say a word for months. Fuck the frat guys who were threatened with violence, had protestors on their doorstep for weeks, had their house and property vandalized, and were briefly kicked off campus, frat guys are America’s monsters anyway, they don’t have basic feelings.

And I’ve said it a thousand times, and I’ll say it again – the most awful part about this is the damage it does to the real victims of sexual assault. To the people who dedicate their time and energy to confronting a real issue of sexual violence on college campuses. People like Hannah Shadowen who is a member of the UVA sexual assault education group One Less and said the story made it “hard for the members there…It was saddening and frustrating.”

That’s what pisses me off about this the most, why I spent so much time blogging about this story so many times. Because this garbage article and the fallout from it is going to give ammunition to every scumbag rape apologist, denier and victim blamer out there. Any time a serious accusation come out in the near future people will have this in the back of their mind. All because a reporter couldn’t do her job correctly and a magazine was in too much of a rush to make a splash than to actually fact check it.

And now has the balls to stand up and defend it. Hope she loses every penny she’s ever made in that courtroom.