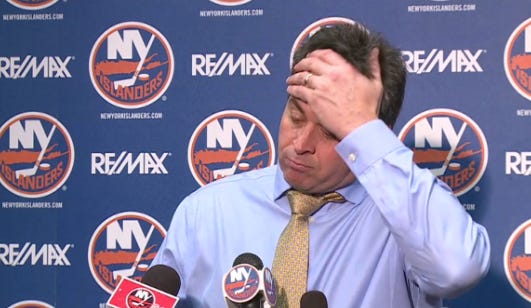 So this obviously wasn’t the start we were all expecting. As the feeling is quickly turning from “well it’s early they’ll figure it out” to “Maybeee this team is just flat out bad” we’re forced to try and figure out just who is to blame for the Islanders terrible start to the year. And frankly, the blame can be put on everyone; from the players to the coaching staff all the way up to your boy Garth E. Snow.

When it comes to this roster, it’s easy to get high on the young talent that is there. Players like Ryan Strome, Anders Lee, and Brock Nelson have all shown they can hang in this league, but over the past few months just haven’t been able to put it all together and show any progression to their game. Which is a major liability when the notion going into this season was that they needed to step up in order to help replace the 130+ points lost when Nielsen and Okposo walked.

When Ladd signed here everyone expected a big portion of those points to be filled by Garth Snow’s newest toy but being that the last time he scored a goal people were still taking Trump’s presidential campaign as a joke [we still are but shit’s gotten way more real], whether or not he will still be able to contribute his fair share is now being put to the test. I’m still riding the notion that Ladd will get it going at some point, but now 11 games in with only a single point to his name, that $38.5M is looking worse and worse as each game goes by.

As already stated, this roster does have talent, and can produce at an NHL level, but the difference in how this offense has looked this year compared to last is night and day. Losing one of the league’s most underrated Centers in Frans Nielsen and a goal-scorer, though streaky at that, in Kyle Okposo are huge blows to the offensive output, but it’s clear that this team’s problems offensively can’t be put entirely on the loss of those two. Which brings me to Capuano.

I’ve been a Capuano apologist for a while now, I can admit that, but for the first time in a long time I think the criticism he is receiving is deserved of the job he’s done this year. Like I said, the loss of 21 and 51 are huge blows to deal with, but with or without them on the ice, the way this offense has been carrying themselves is borderline AHL-worthy at best. I don’t know if Capuano has tried to implement a new philosophy on O or if he’s putting the wrong players in the wrong spots, but whatever he is doing just isn’t working. Granted, this team has had their offensive explosions at times this year, but when you look at Thursday’s loss to Philly and the disaster that was the Tampa game, this offense looks flat out lost. Wingers are stationary at the blueline leaving the Centers to do pretty much all the work throughout the neutral zone, breakout passes are connecting once in every ten attempts, and there’s just no real direction in the upper half of the ice. It’s almost as if there is no gameplan these forwards are going off of, which could explain just why those that were expected to be producing aren’t.

One thing I did see out of Capuano that I liked was, for the first time in pretty much the entire time I’ve been blogging, Cap threw some shade on Garth Snow’s job this past summer.

And he’s not wrong. Obviously, the Andrew Ladd deal is currently a huge blemish on Garth’s summer, but being that he was finally given free-reign to make this a cap ceiling team, which he did, and this is the final product is laugh out loud funny. I mean I spit out my coffee and I wasn’t even drinking any. Bununuhland like you read about.

Again, it’s easy to say Garth did a terrible job when pretty much no one is scoring, but if this is the team he’s rolling with, more has to been done if he wants to keep them trending upwards. At this point there is no doubt this team needs a change and it’s not the god damn forward lines. Now that’s not to say it’s time to blow it up and start over, but either it’s time for a coaching change [the most realistic of the options given the powers that be can find a worthy successor] or Garth needs to start working the phones like crazy to make a deal to bring in some sort of offensive spark, which given the assets this roster has would mean the blockbusteriest of blockbuster deals.

I’ve been saying it all week and it’s growing more and more true by the second. I’m one of the most optimistic fans/bloggers there is covering this team. Maybe it’s a fault of mine at times like these because I’m constantly trying to pick the positives out of every negative this team throws at me, but right now, coming from me, there is not much to be happy about if you’re an Islander fan.