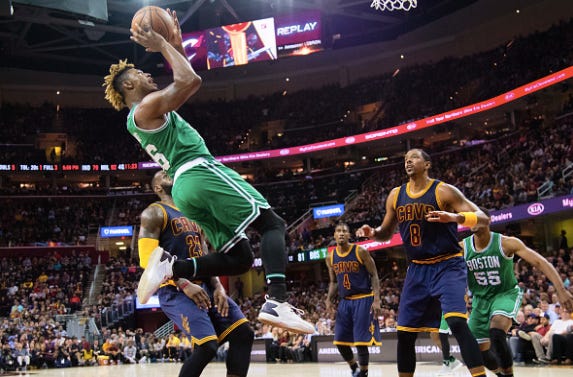 For some reason I forgot how frustrating it can be to play Lebron and the Cavs at home, but boy did last night remind me. Another back to back on the road for the second time in 5 games, the Celtics entered Cleveland without two of their more important starters, had to start a rookie and Tyler Zeller, so while many of us were waiting for this game to be a measuring stick, I don’t think there were any legit expectations for the Celtics to play well let alone win this game.

For Cleveland, they’ve played just one game away from home (TOR) and start the year with 5 of their first 7 at home. It pays to win the title lets just say that. A matchup between what is expected to be the top two teams in the East, even though they lost and have REAL issues (which we’ll get to) I can’t help myself from feeling OK about how the Celtics stack up against CLE. Like oh great you can beat the Celtics by 6 points without two of their starters, big whoop. Just once it would be nice for both teams to be at full strength so we can truly see how they stack up. Sure the Cavs are better, but how much better?

Ok lets get into it

– How could we start anywhere else other than rookie sensation Jaylen Brown. What a big time performance for the kid making his first NBA start against only the best basketball player on the planet. With every opportunity he gets Jaylen is showing this city and its fans why Danny Ainge made the best available choice with that number three spot. For example, Jamal Murray in four games is 0-16 from the field and 0-6 from three. Meanwhile Jaylen is thriving. While normally I would GIF all his good plays, in honor of the rookie’s big night I think he deserves to have his performance watched uninterrupted. Enjoy

Ok so lets talk about it. The positives were he was in no way intimidated by Lebron, and had his moments both offensively and defensively against the best player in the league. He showed good form and ability to recognize the moment on his three made threes, he was active on the defensive end, overall his performance ended up a +15 and even has people talking about if he should be inserted into the starting lineup. This only a few games after those same people were probably RIPPING him for his turnover late in the fourth against Chicago. Maybe now everybody sees what Brad sees in this kid, because he is earning his minutes. At the very least Jaylen absolutely needs to be the starting SF until Crowder gets back, that I think we can all agree with.

– It happens every time I bring up Isaiah and Kyrie Irving in the same sentence, but this was a matchup I certainly had my eyes on. Despite his 30 points and 6 assists on 42% shooting I woke up to tweets about how much Kyrie roasted Isaiah. Forget the fact that Irving shot 6-14 while Isaiah was on the floor, I can understand that due to Kyrie’s crazy made threes early in the game, that those people maybe decided to stop watching.

If I were to say Isaiah Thomas roasted Kyrie Irving, I think I know what the reaction would be. So I won’t just say it, I’ll show it

If you’re looking for a reason this was even a semi close game to begin with, you can thank Isaiah. His 21 second half points (10 in the fourth) brought the Celtics back to life. This isn’t anything new, Isaiah is a tremendous second half player, shooting 50% in third quarters and 47% in fourth quarters so far this season. On the other side, Irving scored 17 of his 23 in the first half (3-8 shooting in the second).

It was also nice to see Isaiah go 14-14 from the line. He needed a night like that.

– The career year of Avery Bradley continues. Another 26/10 performance I’m not sure where the hell this rebounding is coming from. Like clockwork Brad again got him going early in the first quarter with a team high 8 points on a team high 6 shots. The biggest change I see in Avery is how different his approach is offensively. He now has more confidence in his ability to handle the basketball, resulting in more drives which he either finishes or creates for others. As his midrange has improved, he’s started to show the same confidence in his three point shot. Avery has grown into a player who isn’t afraid to take the big shot, and as he develops we are seeing him starting to make it.

– Marcus had an interesting night, despite the good looking box score, he was a -21. You would think that in a game he shot 3-6 from deep that the Celtics blew someone out. The second unit needed scoring so at least he gave that with his 14 points, but if you ask me Frye’s 11 were more impactful for Cleveland. The good news is on a back to back coming off an injured ankle Smart played 28 minutes and looked OK.

– Ok where do I start. How about the Celtics inability to guard the three point line. What the shit is this? Why are they allergic to preventing threes. It lost them another game that’s for sure. When CLE started the game 11-18 that was your story. The Celtics could hang offensively, but every chance CLE got to make a big open three they made. They even made some contested but for the most part the effort on the defensive end has been so fucking terrible. The worst part is perimeter defense is sort of supposed to be this team’s biggest strength, but as we sit here five games in, it’s more weakness than strength.

The defense as a whole, not just the three point line makes you want to puke. When you give up two games of at least 115 and hold only one team to under 100, you aren’t giving yourself a chance to win and you are putting extra pressure on your offense. Good teams create offense from good defense, they don’t rely on good offense to fix bad defense. A prime example was at the end of the first. For the majority of the quarter the Celtics hung around, next thing you know they got lazy and boom a 19-6 run to end the frame. Awful.

– I did not like how Amir never seemed to realize Kevin Love is a three point shooter, so maybe find him in transition. Time after time Love was given an open look because Amir sagged too far down in the paint. I imagine this was on Brad’s scouting report.

– As amazing as his night was, Jaylen missed two huge opportunity for transition fastbreak yams that both resulted in plays going out of bounds. Of all the things I expect from Jaylen, hitting threes but messing up easy transition dunks is not what I had in mind.

– It’s a good idea that when you are attempting to come back from a 17 point deficit, that you don’t start the third quarter with an easy turnover to Lebron and then allow him to go coast to coast for an uncontested layup. Just an idea, but make sure to write that down.

– I don’t mean to pick on Amir in this section, but I could have done without your corner three in crunch time as we are attempting one last push at a comeback. I get why you took it, I’d just rather anyone else on the floor at that moment take it next time. No hard feelings.

– I mentioned it was frustrating to play in CLE right? Anytime you play Lebron at home you have to understand that you are not going to be on the winning side of many calls. He’s going to get more non calls than anyone, and draw more fouls than anyone. Knowing that, you ABSOLUTELY CANNOT FOUL AS MUCH AS THE CELTICS LOVE TO FOUL.

Third in the NBA in fouls per game, the Celts committed 28 fouls (to CLE 19). Not all were legit, but a majority of them were, and this is a lethal problem. The Celtics were of course in the bonus basically in every quarter, including the remaining NINE MINUTES of the fourth. It’s tough to come back on any NBA team under those circumstances let alone fucking Lebron. if i remember correctly there were like three consecutive fouls in the fourth quarter just by attempting to go for a rebound. Gerald Green you need to be better.

If I had to say why the defense has struggled, it’s because this team cannot stop fouling.

– RIP Tyler Zeller. We thank you for your time in Boston

So yeah despite the loss I still feel pretty good. The Celts covered, came back and made it a 5 point game with time to go, and in the end the team with more talent on the floor prevailed. Pretty standard. What I liked is that they didn’t quit, and I don’t think it’s crazy to think that with the additions of Horford, Crowder, and Olynyk that this can absolutely be a competitive matchup. Sucks to lose, but the future still looks bright. 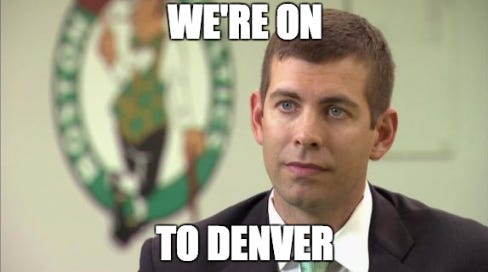