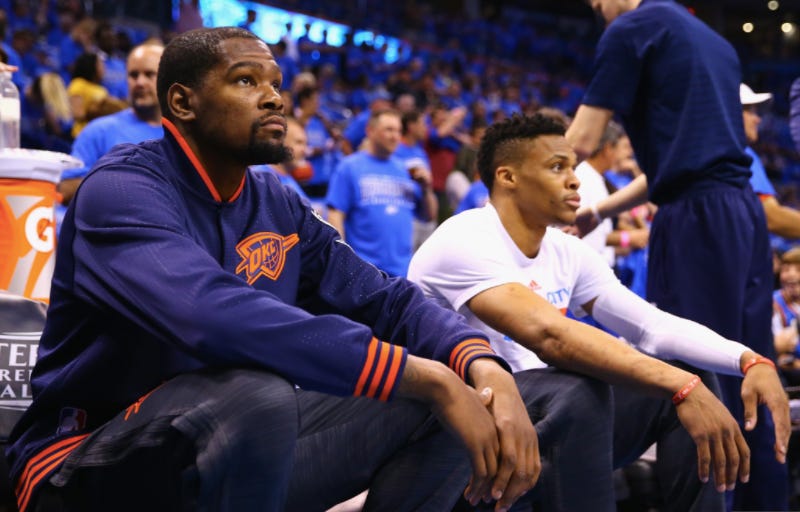 The wait has finally ended. November 3rd 2016 has arrived, a date the entire basketball world has had circled on their calendars since the schedule came out. When Kevin Durant decided to take his talents to the Bay, eyeballs rushed to see when the first matchup would be, and it’s tonight at the Oracle. Kind of soft of the NBA if you ask me, Durant should have to play his old team for the first time in the place he left, not in the comfort of his new family.

Either way, as we prepare for what might actually be a true death match, lets set the stage on how these two teams are doing.

We’ll start with OKC. All summer Westbrook was approached and asked about Durant leaving, and he wasn’t shy

and it’s no secret that Westbrook wants to utterly destroy Durant and his new batch of friends because that’s the type of basketball player he is. Now for his team, after reaching extensions for both Steven Adams and Victor Oladipo, this is the group we’ll be seeing for the foreseeable future, or in other words how they think they can replace Durant. Sure they might be 4-0, but you can thank an absolute poopoo platter opening schedule for that. Westbrook has been playing at a historic level (38/10/10) so it’s clear he doesn’t miss Kevin, but how good is OKC really?

Offensively they can’t really shoot, just 42% as a team, and it gets even worse the further they get back (28% from deep). They rank in the bottom half of the league in terms of FTA, and as well as Westbrook has been at accumulating assists, they rank 24th in the league as a team. They struggle at protecting the rim, and are among the leaders of teams that can’t stop turning the ball over. Now they did just win a close game against the Clippers in LA, but if we’re talking about this game tonight I think that hurts them more than it helps.

The key for them is the work they do on the defense end. Things look much better on this side of the court. They are holding teams to 42% shooting which is top 3 and 25% from behind the arc which leads the league. They do well enough on the glass to consider it an advantage, but again keep in mind the teams that have created these numbers. Teams like PHI/PHX/LAL. Not exactly a murder’s row.

For Golden State, how they’ve started is mostly irrelevant because they are going to hit their stride, but their first four games have certainly been a little different from what we all expected. If you told me that at this point in the season, they would only have one blowout I wouldn’t believe you. But it’s true. The story of why they’ve “struggled” so far doesn’t really have anything to do with Durant either.

Offensively, they’ve currently taken a bit of a step back. It won’t last, but this GS team is shooting 29% from behind the arc. Klay Thompson is 3-28, that’s crazy. I wouldn’t say they are changing how they play, they are still in the top 2 in terms of pace, I just think their offensive struggles come more from how bad their defense has been.

The Warriors like the Thunder love to turn the ball over, but don’t exactly love to defend on the same level OKC does. The Warriors are in the bottom half of almost every defensive category you can think of. They’re giving up 111 a game!! GS was one of the best defensive teams in the league last year, so this is by far the biggest surprise of this new look team. Especially when you consider they’ve played PHX and NO so far. You could argue Portland, but this is the first real test the Warriors have had since the opener.

The good news for GS is Kevin Durant has fit right in like we all expected him to. His scoring is the same 28 a game it was last year, only now it’s coming on 57% shooting. He’s upped his rebounding and steals, his minutes are virtually the same, as are his shot attempts. His 23% from deep is really the only negative thing you can say about the start to Durant’s Warriors career.

The combination of a possessed Westbrook and the fact you know his teammates are going to make an effort to get him a big night, tonight’s showdown is going to officially be MUST WATCH stuff. Imagine if Westbrook has another 40/12/15 and OKC pulls it out? The Warriors are already a sensitive bunch, I don’t think they’ll be able to handle that celebration. On the other side, if Durant has an outrageous night and GS rubs it in Westbrook’s face, that “yeah I made the right decision” shit is going to be fascinating.

My gut says this is the game GS wins, strictly because they are the best team OKC has played, they are coming off a back to back and are on the road. I can’t think of a time a game this early in a season meant to much to either side, but here we are. Buckle up.