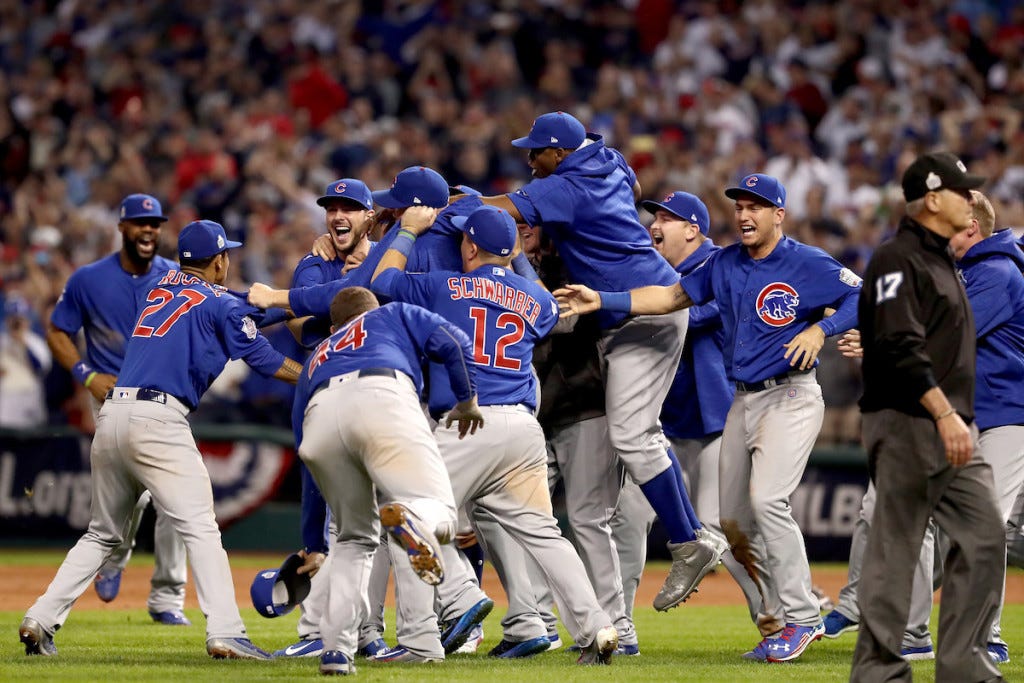 Any time that you get a Game 7 in any sport, the media hype machine forces every single cliche that you can think of down our throats.

One for the ages, Game 7 — the best two words in sports, everything on the line, must-win, winner take all, do or die, there is no tomorrow, anything can happen, backs against the wall, history will be made. I’m sure there’s more, but you get the point. When it was 4-1 in the fifth inning, I felt like there was some false advertising going on. Then, the Indians came back and scored twice in the bottom half to make it 5-3. When David Ross hit a solo home run to make it 6-3, I felt like that was it. The Tribe had scored more than six runs in a game just once all postseason. It was, however, against the Cubs in Game 4.

I had no rooting interest in this series. I was rooting for extra innings, because I didn’t want this series to end. In my first year covering the entire league, the Indians and the Cubs were two of my favorite teams to write about. Two incredibly talented rosters, extremely likable guys, two brilliant managers, and two amazing storylines. The Cubs, obviously, had the best storyline of all, competing for their first World Series title in 108 years. But it’s hard not to root for a team that had faced the adversity that Cleveland did when they entered the postseason. Everybody had written them off, and they made it to the 10th inning of Game 7 of the World Series, before falling to the best team in baseball by a one-run score.

Even in a losing effort, I will never forget the utter shock that I felt when Rajai Davis hit that game-tying home run with two outs and two strikes in the bottom of the eighth inning off of Aroldis Chapman. It’s hard to explain as a neutral fan. I mean, there was definitely no shortage of excitement, I can tell you that. Even without a rooting interest, if you’re a baseball fan, THAT moment right there makes the slow burn of this seven-game series worthwhile. Because, let’s face it, people will look back and refer to this World Series as one of the greatest of all-time, but it’s only because of who won and how great Game 7 was.

And there’s nothing wrong with that at all. I had written before about how I’m totally fine with the first six games being somewhat of a meh experience, as long as Game 7 was a huge payoff, and it absolutely was. As a baseball fan, you couldn’t ask for more than what you got in that game. You had the matchup of the two best postseason pitchers in 2016, a leadoff home run to start the game, the drama of the Cubs building a lead that, although not relatively large, seemed insurmountable. You had aces coming out of the bullpen, you had costly managerial decisions that created suspense, and you had the dramatic game-tying home run from Davis that nearly crashed the internet and left jaws hanging on the floor.

Oh, and then you got the final payoff of witnessing history — the Chicago Cubs becoming World Series champions for the first time since 1908. I don’t care if you’re a Cubs fan or not — if you’re a baseball fan, that moment had to bring you some level of joy (unless you’re KFC). Maybe I’m just more sensitive to it, because, as a Red Sox fan, I can relate to the whole “waiting an entire lifetime to see a World Series” thing. I’m one of the lucky ones, though. I didn’t have to wait very long to see my first, second, or third. But one of the things that I’ll remember most about that World Series in 2004 is all of the World Series pennants, flags and balloons that could be seen all across the graveyards in New England after the Red Sox finally won it all. I would imagine that very same thing is happening in Chicago today.

I’m also happy knowing that this World Series, and that Game 7, undoubtedly created new baseball fans. Lifelong baseball fans. If you weren’t a baseball fan before, and you were one of the millions and millions of people who tuned in to watch that game, how could you not be drawn in to our weird little world of baseball fandom? I mean, sucks for you, because it’s almost like taking a drug for the first time. You’re going to be chasing that high forever now, and you may never get it again, but you’ll chase it. Oh, you will chase it.

Hopefully now, you’ll watch your team show up to spring training, unload the equipment trucks, play catch along the outfield foul lines, scrimmage against college teams, take in your first spring training games, witness your first Opening Day, watch the boys of summer for 162 games, and hopefully see your team make it back to October. I’m sure that happens every year, a World Series creating new baseball fans. But this one, this World Series between the Cubs and the Indians, I think created baseball fans outside of those two cities because of that incredible Game 7.

You start asking questions like, why was this so important to the city of Chicago? That opens the door to an entire baseball history lesson. Every World Series title is technically baseball history, but that championship that the Cubs won last night was close to being the pinnacle of baseball history. This is the one that most of us thought we’d never see. That was the one that a lot of us didn’t get to see. But for those who saw it, they will never forget it.

Congratulations to the Chicago Cubs, and their dedicated fans. To Theo Epstein, and his baseball operations team, who had a vision and brought it to life when nobody else could. To the players who came into spring training this year as the odds on favorites to win the World Series, backed that up with a major league-leading 103 wins during the regular season, and capped it off with one of the most exhilarating Game 7 victories of all-time in the World Series. You’ve literally been waiting your entire lives to say it, and now you can. The Chicago Cubs are World Series champions.