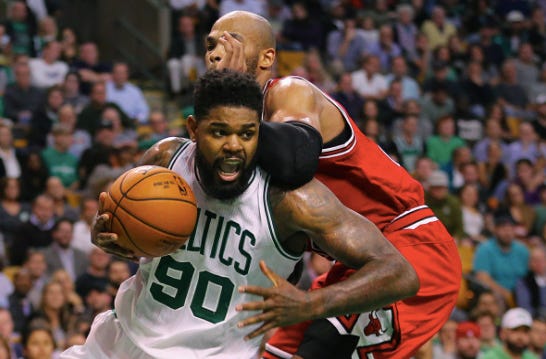 A lot of mixed emotions as I write this. On the surface we should be happy, a 3-1 record to start the year, the Celts avenged their first loss of the season, and while I sit here happy they pulled it out, there are still a wide variety of issues that we have to talk about. The good news is, all that talk about #depth in the offseason finally showed why it isn’t just Green Teamer bullshit. This team is deep. One guy goes down, the next man stands up and contributes valuable minutes.

When they played Chicago last week, it was a weird game. Butler, Wade, Rondo, all turned into automatic three point shooters, the Bulls took a shit ton of FTs, and yet the Celts still almost pulled it off. I felt after that game that it was more a game the Celts threw away than anything else, and now that they beat them rested, without two of their starters sort of validates that for me. This was a game that if you want to be considered a Top 2 team in the East you had to win, and they did.

Here’s how they did it

– It wouldn’t feel right if we didn’t start with The Big Dog. Amir Johnson has had a really positive start to his season. A player they won’t ever run a play for, his energy and effort are what make him a valuable asset to this team. The 30 minutes he played in this game were his highest of the season, and without his effort, the Celtics lose this game. Remember he played half that in their first meeting, but going 9-11 (4-4) for 23 points 6 rebounds 3 assists 2 blocks 3 steals almost made it impossible for Brad to take him out. Amir’s activity is what allowed the Celtics to play their style of basketball, and when you dump it down to him in the closing moments of a tight game and let him go to work, you trust him.

But that’s not the story. The story is that Amir Johnson now has made more three pointers than Klay Thompson. Amir said he was so hot he didn’t even see the basket, and that’s really the only explanation for this

The NBA in 2016 WATTBA. No knock on Amir here, but that is the slowest release in the NBA hands down, but bless his heart for making all four attempts.

– If you thought I was waiting one more sentence without getting to Isaiah you need to get your head examined. Ho hum, another 23/10 with good percentages, this time going toe to toe with NBA star Jimmy Butler. Nobody thinks Butler should come off the bench on a title team right? Just wanted to check on that real quick.

Sadly, this offensive performance was the worst Isaiah has had all season in terms of points, so he really needs to focus and get better. What I really liked about Isaiah’s performance was it was filled with big shots. He was almost like Ali playing the Bulls like a fiddle. To start the game in the first quarter, he made them understand he will take and make a three right in your eyeball. Doesn’t matter if it’s playing off the ball

And especially when you don’t learn your lesson

What this did is it made Chicago play him deeper and deeper, which is Step 1 in how Isaiah murders you. Once he knows he has you in space, he makes one move and poof, blows by you. What makes him dangerous is his ability to change his mind amongst all the chaos. What I mean by that is while his primary goal is always to get to the rim, he can recognize when he needs to make a drastic change and it turns into an unguardable result. Case and point, this fadeaway

Want to know how Isaiah is able to be so effective against 7fter’s? There it is right there. He knows how to get to a space they can’t get to. Now as a defender you’re all fucked up. You have to go out and guard him, but you’re worried about him driving, as that sinks in you remember he can hit a midrange pullup, and you then start to cry. It’s at that point of weakness that Isaiah goes in for the kill. They say Isaiah can’t hit big shots? That he can’t be a “go-to” option? Wake the fuck up

Off the wrong foot, with his off hand, the amount of touch and spin you need to complete that move is ridiculous. Last year was no fluke, Isaiah has developed his game to a level that is among the NBA elite at his position. That’s not me being a homer, those are the facts.

– It’s comforting to know how every Celtics game is going to start, and that’s with Avery Bradley. Brad never fails us, he understands Bradley is one of the best first quarter player in the league, and just like they always do, ran him through his usual screens on basically the very first possession

You can see the play called for Avery to take that corner three, and I liked how he recognized that with how Zeller was positioned he had an easier shot in the lane. Mr First Quarter did his part with 7 points in the opening frame, but it was the play of Isaiah and Jae early as well that really set the tone.

– Don’t look now, but the Celtics shot 47% from the field again, and that was without two starters for most of it. From behind the line was an impressive 43%. We all sort of joke about this team’s shooting, but what if they are really going to be middle of the pack this year and not league worst? The Boston Celtics LEAD THE LEAGUE in field goal percentage. That is the very definition of bonkers. Small sample size sure, but facts are facts.

– Why do I think the shooting has improved? Pretty simple, because of how well the Celtics are moving the ball. Third in the league in assists per game, they are getting great ball movement from almost every position, not just point guard. Avery continues to pass well (4 more assists), with Smart back in the lineup it makes some sense, but this ball movement is leading to wide open looks. You give NBA players enough wide open looks, of course they are going to knock them down

28 assists on 41 baskets is the type of passing that’s consistent with what we’ve seen so far this season, and if you’re curious why I get so mad when the ball sticks, this is why.

– As is life with Marcus Smart, his night was a mixed bag. One thing that you can’t deny, is he made an immediate impact. That’s the thing with Smart, his 7/5/5 isn’t going to jump out at you, but he was a major key into pulling this game out. His rebounding, his defense, his steals, it’s really like Danny says, “the play finds Marcus”. You know what I found? I found living proof that he can make an NBA three

I say it all the time, and that’s Marcus’ biggest asset is his ability to make “winning plays”. Sometimes that can seem like a bunch of buzzwords to cover up for a player who people might think stinks. But no, it’s real…and it’s spectacular. Marcus Smart = winning plays

– Good to see Brad step it up and convert some ATOs. This was a game they needed to rely on their coach given the mental shock of losing Crowder and already being without Horford. Brad pulled the right strings, took good timeouts, and I think played a huge role in why they were able to pull it out.

– I see you Terry. Nice little personal run in the fourth on back to back possessions

– At least it appears the defense is trying to make strides. The Celtics did a great job keeping the #ACTIVEHANDS movement alive, with 10 steals and 19 turnovers. This team needs to turn teams over if they really want to be a threat, because when they do, you almost can’t beat them.

– LA might have Jack, but we have the Jordan’s Furniture guy so who’s really winning? 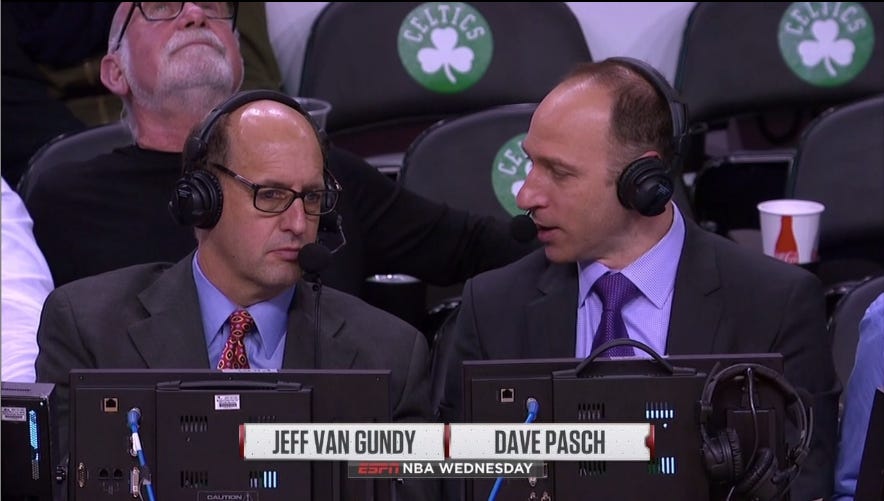 – I know his final line was pretty good, but boy did Tyler Zeller have a rough start. Getting layups blocked left and right, can’t convert on a putback, really he was manhandled to start this game. He eventually came around, but it is damn frustrating when he won’t man up and just dunk it. Obviously easy for me to say behind a computer, but it’s true.

– There are few things the Celtics love more than fouling teams in the bonus. Well, they might love actually getting into the bonus early more. Each and every quarter they play a third of it in the bonus, and can’t help themselves. Free throws for everyone. What’s impressive is it doesn’t matter the point of the game either! They’ll do it in the first quarter while up a bunch only to keep the opposing team close, or they’ll do it at the end of a game up only 1 point! The Celtics give no fucks in this regard and it is MADDENING.

– Make no mistake, my distaste for missed FTs is real, and I am ready to officially say this team has a problem. It already blew them one game, and it nearly cost them another. There are certain players on the roster I don’t get mad at when they miss, like Amir. I expect him to have his issues. But I can’t live with Rozier, Smart, Zeller, and most importantly Isaiah, missing like this.

With Isaiah, he has the FT yips. A career 86% shooter, he’s currently at 69%. FTs are about 99.8% mental and I won’t sit here and act like this isn’t a problem. This team isn’t good enough to give away points at the line when their good shooters are taking them.

– After a 5-0 run to start the quarter, the Celtics imploded. A 18-7 run by Chicago took what should have been a relaxing finish and made it stressful as fuck. Playing at home you can’t have a fourth quarter like that, and don’t let the win make you forget how close they were to blowing this game.

– It’s the Jae injury obviously. God dammit can the Celtics just have a chance to see what this team can do healthy? Fuck man. You knew INSTANTLY as soon as he went down that he was cooked. They’re saying a week, but don’t bet on it. I bet we don’t see Jae till Thanksgiving.

Stepping on a players foot is such a freak thing I think that’s what makes me so mad. He was having a GREAT start to the year, the biggest improvement was the lift he was getting on his jumper. Well we can kiss that goodbye. Ankles linger, and if I could sacrifice my own I would. Impossible to not feel for Jae.

And here we are, back at it again tonight with a back to back in CLE without Crowder or Horford. This probably means Zeller and Smart both start and chances are you probably don’t think they can win this game. Vegas has CLE -9.5 which some might say is low, but around these parts people don’t forget