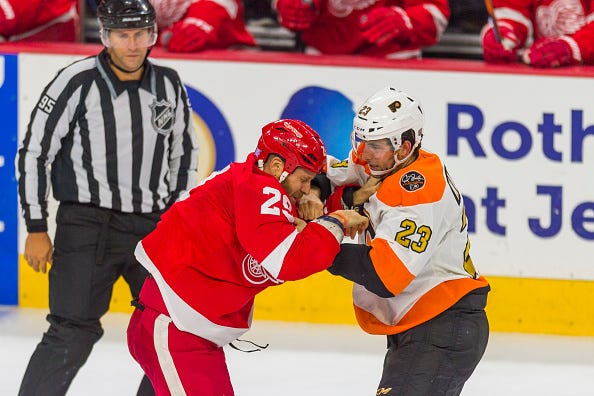 I mean. Wow. Just wow. What an incredible range of emotions we all experienced during that game. A game filled with so many highs and so many lows. It didn’t even matter if you weren’t even a fan of either team, your stomach was in knots the whole time watching this. When a drought as long as this one is on the line, you have to stick around to watch the entire thing. But in the end, the Detroit Red Wings are still unable to beat the Philadelphia Flyers in Philadelphia since 1997. Truly incredible so let’s see how we got here.

Listen. I’ve never once called myself an “expert”. I’m no Darryl Sutter. But I have to imagine that it’s an ill-advised plan for the Flyers to keep digging themselves holes to climb out of game after game after game. Through 11 games so far this season, they’ve gone into the first intermission with a lead just ONCE. One time. Lucky for them they’ve either been tied or in the lead during the 3rd period in all 11 games so far. So yes, the Flyers have a Very Strange Addiction. They are addicted to comebacks and it’s time that we all hold an intervention because it’s only a matter of time before this addiction either kills them or it kills one of us.

The problem is I think I actually have to put a lot of the blame on the goalies. I know that they get zero help from the defense early. I know that breakouts are extremely sloppy and the Flyers turn the puck over about a hundred times to start every game. I know that they deserve better but if you want to be a team that plays into the summer, you need a goalie who can come up with those big time saves for you. How many times have teams scored back-to-back goals in under a minute on the Flyers already this season? Again, I know the goalies settle in later in the game. But Neuvirth needs to make that save on Athanasiou. He almost let in another goal for Larkin later in the period too. The Flyers don’t have a goalie who can shut down and take over games, and that’s really what they need if they’re going to keep sucking nuts to start every game.

Yes, you read that sub-headline correctly. Brandon Manning has been the biggest surprise early so far this Flyers season. You can go back to check the records. I spent the entirety of last season ripping Manning for everything. Not exactly sure what happened over the summer but it worked and he’s found his game. 2 goals and 5 assists through 11 games. He’s making some great plays defensively. Still a few egregious turnovers here and there but as far as consistency on the Flyers’ blueline goes, he’s the #1 guy. He’s playing with confidence as evidenced by that beauty of a stretch pass to send Nick Cousins on a breakaway early in the game. He’s playing with a chip on his shoulder as evidenced as the clip above. And the rest of the boys respond to him. Down 2-0 in the 2nd period, decides to scrap it up with that noted sack of shit Steve Ott, all of a sudden the game starts to shift…

The word on the screet is that Michael Raffl is good to go for tonight in Brooklyn. So with Raffl returning to the lineup, you’d have to imagine that either Chris VandeVelde or Roman Lyubimov would be the odd man out and take a seat in the press box. Last night they both made their case for why they should stay in the lineup. (Personally, I think you leave VandeVelde at home. He just had another baby, bet he wouldn’t mind staying in tonight with her). I think it would be a good idea to see if you can get Roman Lyubimov in some sort of a groove out there. He just got that monkey off his back after scoring his 1st career NHL goal, now maybe he can play a little more loosely and free out there. As for the VandeVelde goal, it was a big time play. Takes plenty of patience to pull that move on Mrazek instead of just trying to whack at that feed from Brayden Schenn right away. Speaking of Brayden Schenn…..

This. Was. Not. An. Attempted. Hit. By. Brayden. Schenn. I was seeing way too many people on Twitter last night bitch and complain about this “hit”. Schenn is clearly trying to avoid making contact with Smith. He jumps to get to the inside of him so he doesn’t end up crushing the dude from behind. He keeps his elbow tucked and just so happens to still make contact with Smith’s head. It’s hockey. The game moves fast. Shit happens. Even after people started to realize that Schenn wasn’t trying to take of Smith’s head, they were saying that he needs to be “held accountable for being so reckless”. Fuck off with that. The Flyers get suspended for literally anything and everything they do. Accidental contact is where you have to draw the line. Plus, Smith came back into the game in the 3rd period so everybody can shut up. Now back to the fun stuff.

You can say whatever you want about this Philadelphia Flyers team. But you can’t say that they’re not at least a bunch of resilient sons of bitches. Of course they ended up giving away another goal in the 3rd period after climbing out of that 2-0 hole. Of course they’d have to find a way to play from behind yet again. But somehow this Flyers team finds a way. We see this move down low to Simmonds from Giroux all the time on the powerplay and rarely does it ever work. But that doesn’t matter because Simmonds whipped out his dick right in front of the net and then the Flyers were able to cash away the greasiest of grease goals to send this bitch into overtime.

Am I gonna have to punch Dave Hakstol in the dick for continuing to put Andrew MacDonald out in overtime? Are you fucking kidding me? That has to be a joke. Why is Dave Hakstol the only person in the world who doesn’t realize that Andrew MacDonald isn’t even worth a bag of pucks? For the love of god get him out of this lineup. Luckily he managed to not fuck anything up too bad in the extra frame and then boom.

And with that assist, Captain Claude moves into a tie with Anisimov for the points leader in the league.

I’m sure you’ll recognize a few more of those names in the top 10 as well (yeah, I know they played the most amount of games). It’s just great to see the top dogs all performing and producing early on this season. Obviously that hasn’t always been the case for this team.