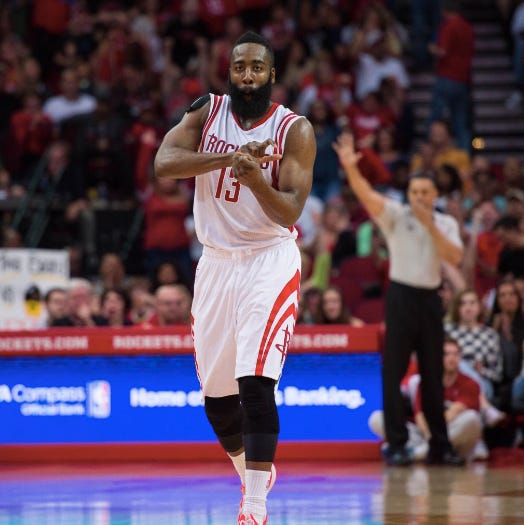 By now most teams in the league have played enough games where it is perfectly acceptable to make assumptions on a bunch of things that in most cases will change by the end of the year. The beauty of the start to the season so far, has been how unpredictable it has been. We’ve seen legendary performances, shocking blowouts, shocking close games, basically everything you could have wanted to start a season.

Life is good for the unconventional PGs

Lets start with James Harden. Having the ball all the time is nothing new, but this is getting pretty crazy. If you missed it Zach Lowe pointed out that 38% of all HOU possessions Harden is on the floor end in a shot/TO/FT, while 58% end on assists from Harden. Those numbers don’t even make sense. What’s interesting is he’s only seen a slight jump in his usage rate (32.5 to 35.9), but the impact he’s had on the team as a whole is already showing. The Rockets (2-2) have improved offensively all over the place, with better FG%, improved 3P%, more points per game, more assists per game, things you would expect in a D’Antoni offense. The reason for that is Harden’s start: 32/7/11 with 48/38% splits and a PER of 33.5. Losing Dwight and deciding to not use a traditional point guard so far seems like it won’t be a problem. If they could just learn to defend.

Same thing with what’s happening in MIL with the Greek Freak. Another 2-2 team, MIL is in a weird place. They have a lot of really interesting young pieces, but they are still a ways away from seriously contending in the East. The good news is the Greek Freak is a certified stud, even playing point guard. Through the first week, we’ve seen signs Giannis is in the process of making a major jump. Going from 16/7/4 to 23/10/6 with a career high PER of 26.5, he’s been everywhere.  The reason for the uptick is simple, he has the ball more. His usage rate has jumped from 22 to 27%, and more importantly his assist percentage has jumped from 20 to 28%. He’s responding well to his new point guard duties.

The Jazz appear to be very real

Sure they’re 2-2, but they are a 2-2 team that hasn’t had its best player and just beat the San Antonio Spurs on the road. Not only is that a surprise, but there is also the matter of Joe Johnson. Crazy to say he’s kept an NBA team afloat in 2016? His 50% from the field and 46% from three seem to say it’s not that crazy as he attempts to fill the hole left by Hayward’s injury. They’ve also gotten 20/5 production from 30 year old George Hill of all people while Dante Exum is worked back slowly. That’s the story with the Jazz so far. They’ve shown they can be pretty middle of the pack without their big guns healthy, they rank around 15-17th in the league in essentially every category, but after the first week I would say it is no longer a surprise if this team snags a 6 seed or something in the West

When he dropped 35 in the opening night blow out in GS, it took the NBA world by storm. Kawhi Leonard was never considered that type of scorer in his previous years in SA, and now that the team is officially his, you can’t help but be surprised with how that looks. He followed that opening night performance with 30 against the Kings, and then another 30 point effort last night against Utah. For the season he’s up to 28 a game, and let me put that into perspective for you. Nobody has had a scoring season like Kawhi has had so far since the great David Robinson in 1993. Not even Tim Duncan. That’s pretty cool.

Combine his offensive growth with his already best in the NBA defense, then the fact that he’s 25 and you have yourself a franchise player.

When will Dallas win their first game?

After dropping their opener in OT to the Pacers, the Dallas have had a tough time with their own division this first week, losing two in a row to Houston. All three of their losses have been close, but I don’t think anyone thought this team would be winless through their first week. Their problem has been their offense, and their rebounding, and their defense, they rank towards the bottom of the league in almost everything. Their offense is scoring around the same it did last year (103) but their percentage is awful, and on the defense side they are giving up seven more points per game than they did last season (109 to 102). Rick Carlisle is too good a coach to see this continue, but maybe relying on a 200 year old Dirk and Harrison Barnes may prove to not be the best strategy.

Who is Tim Frazier? Why should you care about Tim Frazier? Both are good questions. Let me ask you, do you have a heart? Do you love a good story? Ok then. Frazier is a 6’1 starting point guard for the winless Pelicans who came out Penn State in 2014, and ever since he’s been fighting for his NBA life. He starred for the Maine Red Claws, was a D-League All Star, and eventually earned a 10 day contract with the Sixers. He wasn’t there to stay as he made the journey back to the D-League, where eventually won MVP.

The next year Portland signed him, only to release him later that year, so back to the D-League yet again. All he did was drop more triple doubles for Maine, and there was New Orleans, in desperate need of a point guard.

Fast forward to this season, Frazier has started all four of their games filling in, and is putting up 15/4/9/2 in 33 minutes a game. With Tyreke Evans and Jrue Holiday both out, this position is Frazier’s at the moment, but he has shown that he can play at this level, somewhat of a surprise if you ask me.

Raise your hand if you were expecting Klay Thompson to start the season 3-28 from behind the line. A stellar 10% is something I don’t think I even knew was possible. Curry looks as splashy as ever, Durant has had no problem, but things just aren’t falling for Klay. It’s not for lack of trying, he is taking seven a game, and in a weird way his 2016 season is looking a whole lot like his 2012 season when he was 23. You can tell he’s clearly letting it impact him, his defense has been the worst of his career so far this season. Again small sample size, and he is 100% going to turn back into a basketball alien, but this start is a tad surprising.

What a start for the Eastern Conference

Those are your top 8 seeds in the East, and other than CLE, I’d say this is pretty surprising. Chicago and Atlanta both being undefeated is one thing, but for Chicago, they can shoot! They’re listening to their coach! Rondo hasn’t punched anybody yet! Weird stuff.

In Atlanta it does surprise me that Dwight has fit in so well. Their defense is no joke, and Dwight has been really effective in his limited minutes (26 per game). And how about Detroit? Despite having the lowest scoring offense of any team in the top 8, they have the fourth best differential and have won three in a row.

It is also fact that the Celtics defense is giving up 106 points a game. It’s really bad at the moment, which is a surprise to say the least.

The Sixers self control

Entering the season the talk was around keeping Embiid at around 20 minutes per night. Then he started playing and I don’t know how the Sixers have been able to keep him at an average of 21 min through three games. He’s just so fucking good. It’s not a surprise that Embiid is doing what he’s doing, but all the credit to Brett Brown for having the self control to not break his new toy. Highest he’s gone this season so far is 25, and if you’re a Philly fan you have to love what you see.

Will he average a triple double the entire season? He’s 1 blown assist from being 3-3 this season, and while everything we’ve seen so far says yes, I can’t see it. Lets not forget OKC has played PHI/LAL/PHX who are a combined 1-10. His numbers have been ridiculous and you can thank his league leading 40.4% usage rate. Here’s the surprising part. Despite this huge production, and heavy usage, Westbrook has never been better at not turning it over. His turnover percentage is the lowest its been in his entire career. THAT is not something I saw coming.

There are a ton more that I could list but you get the point. The 2016-17 NBA season’s first week has been about as great as I can remember, and some teams haven’t even started playing well yet. If they could just fix their site, and put all League Pass games in HD, then we’d really have something.