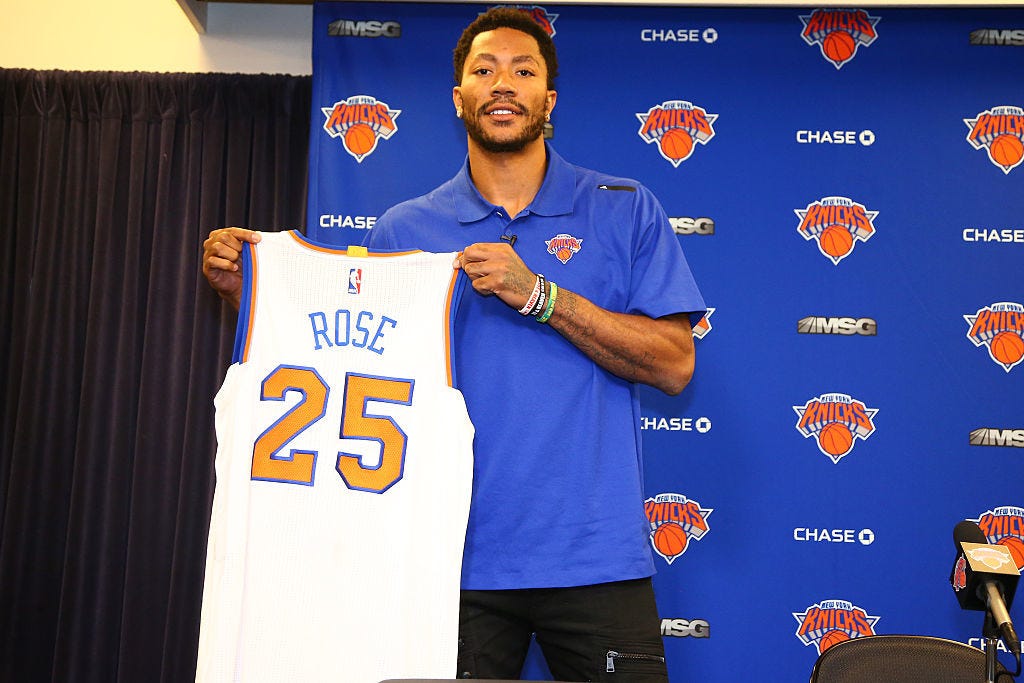 NYDN- Derrick Rose said he adopted an alter-ego in Chicago, which is why he went with the No. 1 jersey as opposed to the No. 25 he wore in high school and college. That player from the Chicago Bulls, the No. 1 in red, no longer exists. His rise and fall were about as dramatic as you can get in the NBA, and Rose said he ditched the Type-A style for something more restrained. He’s now back to No. 25 with the Knicks, saying Tuesday that he didn’t care about the Bulls giving his No. 1 jersey another player — Michael Carter-Williams — who subsequently switched to No. 7 to avoid controversy.

“My brother told me about that. I really didn’t care. I really didn’t care,” Rose said. “That No. 1, that’s something in the past. That was a young, raw talent, reckless type of player. The player you see now, I think I’m more mature. I think that my IQ of the game got higher and I don’t have to do the things I did in the past with the team I have right now. I’d look crazy going out and shooting some of those shots that I took with the Bulls. So, there’s no need for that.”

I bet the Bulls feel like suckers after finding out that number 1 Derrick Rose was an alter-ego. Just an act to get through the day-to-day pressures of going back to your hometown and trying to grow from concrete. If Bulls brass had just asked Rose to change to number 25, he’s in Chicago putting up numbers with D Wade and Jimmy Butler at his side. Instead, the Knicks swooped in and had Rose take off his Clark Kent clothes for some Superman threads. The one demand Phil Jackson probably had in the Rose trade was that Rose would wear number 25 and leave that injury prone alter-ego motherfucker in Chicago. Two games in and Number 25 Derrick Rose is pulling moves like this off like he’s back in Memphis with Coach Cal again while repping the memory of Benji Wilson.

Haaaave mercy! I’ve long subscribed that a number makes the player and this is just another example of it. Say what you want to say about The Zen Master, but he bought Apple stock when the price was low. Now that stock is wearing the number 25 and is ready to take over the goddamn universe once he gets back in game shape due to his alter-ego’s injury issues and legal troubles. All that’s left is to get Melo to switch to number 15 and you can pencil the Knicks in for an appearance in this year’s NBA Finals.

P.S. Anytime a player takes over the former number of a good/great player, it’s confusing as fuck. Seeing the kicker on the Florida Gators wearing number 15 is downright disrespectful to Tim Tebow, and God if we are being honest. And that still doesn’t touch the level of wrongness of Andre Williams wearing Ahmad Bradshaw’s number 44 the last few seasons. Teams need to temporarily retire numbers of really good players for at least 5 years so our brains can properly adjust to new players wearing them.