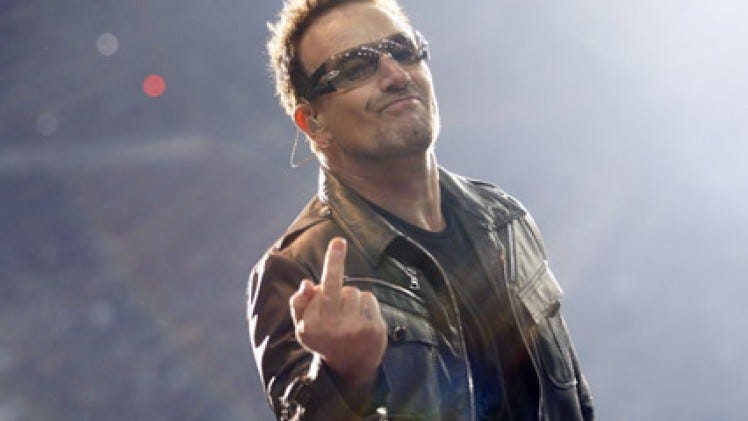 CBS –  Glamour’s annual Women of the Year list always takes in a lot of territory, from noteworthy fashionistas and sports heroes to social justice activists and business leaders.

Enter Bono, the first Man of the Year among the magazine’s Women of the Year honorees, all to be feted at a Nov. 14 ceremony in Los Angeles…

…Bono said in a statement Tuesday from Glamour that the battle for gender equality won’t be won unless men step up and lead alongside women.

Bono. This mother fucker right here. First he finds a way to rape every iPhone in the world with his new album. Then he gets nominated to be “Woman of the Year” by Glamour. What can’t this son of a bitch do?

This is the world we live in now in 2016. Chicks can be dudes. Dudes who still have dicks can be chicks if they say they are. If you tried to explain to your grandfather that the Irish dude who sings “Where The Streets Have No Name” could potentially be the Woman of the Year for 2016, I think he’d end up punching you right in the face. It’s all a very very confusing time. Kind of wish we had a cheat sheet for this whole thing.

Sidenote: I never know how to feel about U2. I feel like people who are adamantly against them actually have to try to hate U2. But on the other side of the coin, I know that I could never get along with somebody who is a full-blown U2 fan. Like somebody who has gone to multiple concerts and actually makes an effort to put their music on. Completely apathetic toward U2 is that sweet spot that everybody should aim to be.