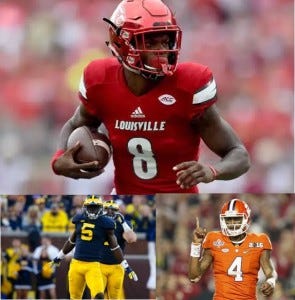 Week 9 was mighty interesting, and oh boy is this race getting tight. Let’s see how our Heisman Hopefuls did this past week…

Jackson’s Cardinals trailed by as much as ten points on Saturday as the Cavaliers gave them all they could handle. A ballsy move by Bronco Mendenhall going for two to take the lead with two minutes left gave Jackson the ball and a chance to have his first real Heisman moment. He flourished…

It was the first game this year he was held without a rushing touchdown, but he made up for that with four scores through the air. A loss to the Cavaliers would have hurt his stock greatly, but instead he showed the ice water in his veins to deliver an absolute dime to win the game. Jackson’s Heisman odds stayed the same at -300, but his competitors took a big step closer..

Watson’s Tigers needed a rally of their own to keep their undefeated season alive. Watson led a game-winning drive to take the lead back for good from Florida State on Saturday night. His numbers were good, not great, as he threw for over 370 yards and two scores, but turned it over twice. Now Watson gets an easy schedule to finish the year: vs. Syracuse, vs. Pitt, @Wake Forest, vs. South Carolina. He will sure rack up some great stats in those four contests to pad his numbers. This win all but guarantees Louisville will be on the outside looking in for the ACC Championship Game unless Clemson suffers a massive upset.

Is there anything this kid can’t do? Peppers is gaining the most steam out of anyone not named Lamar Jackson. He has a marquee game awaiting him at the end of the season at Ohio State on November 26th. That game will likely decide who gets into the college football playoff and all eyes will be on #5.

Listen they got there W and that’s all that matters. It was ugly, and they needed a late punt return touchdown to get the job done, but they survived. His numbers from the game won’t blow you away, but Browning had a game-changing play, not with his arm, to help lead Washington to victory. The Heisman Hopeful faced a 4th and 8 from the Utah 41 with the score tied late in the 4th quarter. Browning pouch punted the ball down to the Utah 1. That forced an inefficient 3 and out for the Utes. With Utah focused on preventing the block, Dante Pettis of Washington was given plenty of room to run back the kick for the game winning touchdown. Browning won’t get much credit for the win, but he was vital in the outcome being in Washington’s favor. Great players thrive in crunch time situations, and Jake did just that on Saturday. It should be smooth sailing for the Huskies from here until the last game of the year against Washington State. Mike Leach has his boys playing great football and I expect the season finale to be a great one. Waiting for them in the Pac 12 Championship will most likely be Colorado, who should be a top ten team by ten if they win out. Browning is now up to 28 touchdown passes and three interceptions on the year and should have a field day against the horrific Cal secondary this weekend. I don’t truly understand why Vegas doubled Browning’s odds from +1000 to +2000 since he did beat a ranked team in a hostile territory. It will be fun if Browning carves up his next three opponents (@Cal, vs. USC, vs. Asu) and heads into Washington State with crazy numbers. For now he sits fourth on this list. If Washington wins out they’ll be in the playoffs, plain and simple. The committee will correct themselves and realize how good this team is, it’s just a fact.

So what did we learn?
Lamar Jackson is still the clear front-runner, but the gap is closing. Louisville’s playoff chances took a big hit as Clemson survived FSU’s best punch. The Cardinals will be big-time Ohio State fans November 26th when they face Michigan. Even then though, Ohio State would most likely hop Louisville in the playoff. I think it’s very crucial that the Heisman winner gets into the playoff and it could spell trouble for Jackson’s chances. Also, let’s pay close attention, as if you weren’t going to already, to Alabama @LSU this weekend. Jalen Hurts is not being talked about in this race, but if he absolutely obliterates LSU on Saturday then we could be adding his name to the discussion. Performing under the lights in Death Valley can do wonders for your stock in the Heisman Race. I’m switching my pick to Peppers to pull this thing off. If Michigan can run the table and beat Ohio State in Ohio State then he’s got a great chance to win it.