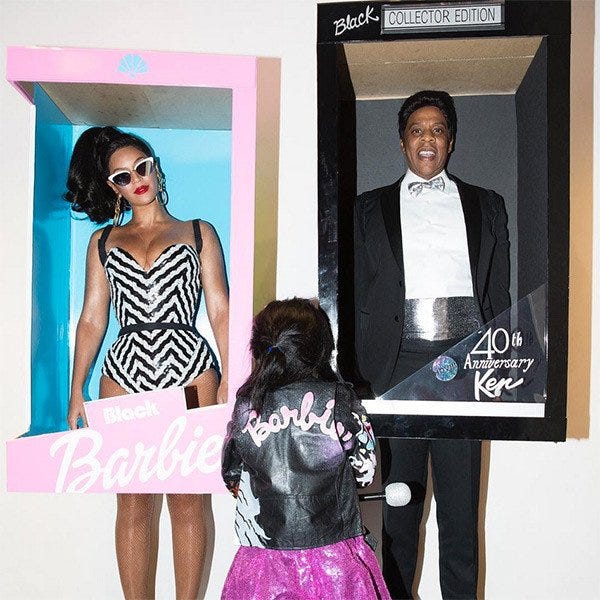 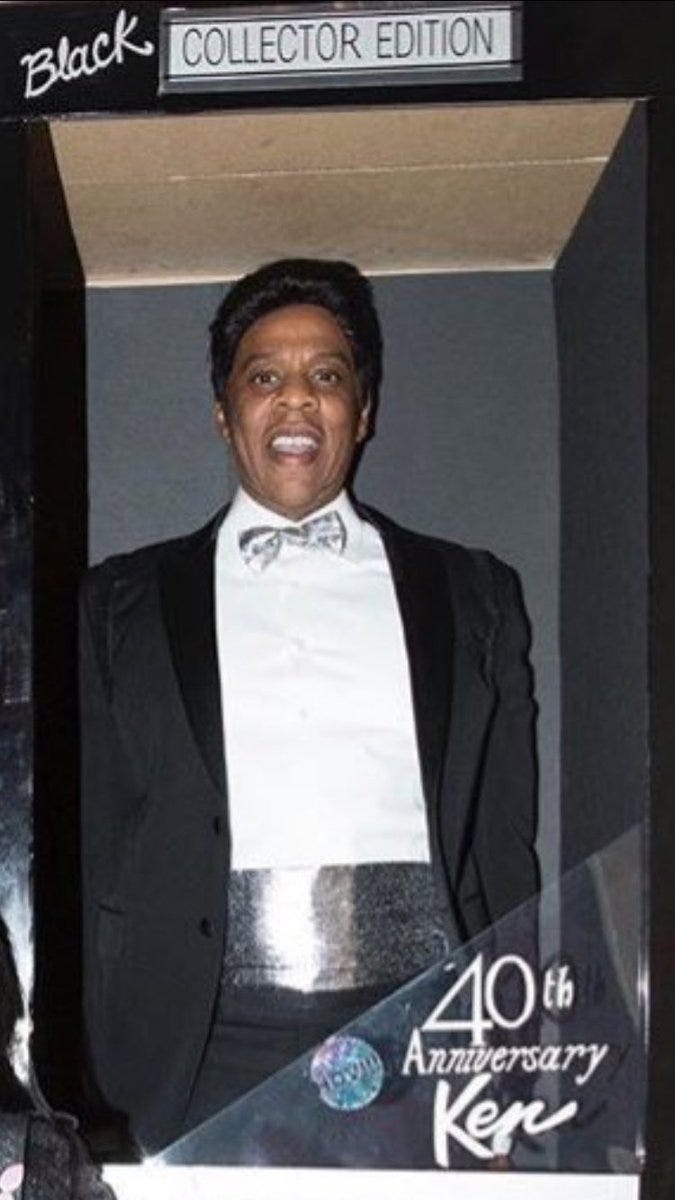 You see that? You see Hova in a couples costume being a goddam Ken Doll for Halloween? That’s called “Fuck You Money.” And Jigga has it coming out of his fucking ears.

The internet is having a field day with this picture. Calling him whipped and emasculated. Saying he’s washed and sold out. He put Prodigy on the Summer Jam screen in a ballerina outfit and now he’s a Barbie Doll!

Motherfucker Jay Z is the most successful rapper of all time, he’s married to a musical and cultural icon, and he’s pushing FIFTY. You want this dude to be the guy moving snowflakes by the o-z? You think he’s still in “Friend or Foe” mode? Get outta here. Jay Z left that trash ass life behind about 100 million ago.

He’s got more classic albums than most current rappers combined. His worst albums still better than the vast majority of anything ever put out. He’s a part of the most powerful duo in entertainment today. True mogul shit. You know what happens when you’re that successful? You stop caring what anybody thinks. All that tough guy drug dealing murder rap was a lifetime ago and 99% of rappers do that shit and say that shit because it’s insecure macho nonsense. Hova will spit a verse about being a boxed up Barbie thats light years ahead of anybody else’s made up nonsense about slangin weight.

Truth be told rap is so new and so many guys have gotten murdered we havent really been around long enough to see what happens when the ultra successful rappers get this old. This is what happens. They marry iconic super stars and make so much money they dont worry about being the alpha male anymore and they do stuff to make their wife and kid happy. His daughter probably enjoyed herself more than she’s ever thought possible last night. Doesnt mean that Hov isnt still one of the greatest to ever do it.

I mean dont get me wrong, I get it. You dress up in a couples costume, you’re gonna get ROASTED. You make your entire persona on be a cocky swagged out rapper, you’re gonna get smoked when you dress up with your wife and kid. Trust me, I know how it goes when you’re in the public eye with one perception/persona and then you grow up. So I dont have a problem with clowning on this guy. But lets just relax when you act like this dude isnt one of the greatest music success stories in history because he did a couples costume for Halloween.

PS – Just goes to show that it doesnt matter who you are, when you’re married and got kids you just do what your told. Halloween in a relationship is the WORST because they always come at you with some absurd couples costume – i.e. Ken and Barbie in the goddam boxes still – and you just gotta go along with it. The only thing worse than being in a mortifying couples costume is being in a month long fight because you refused to do a mortifying couples costume that would make your wife and kid happy. Doesnt matter if youre a blogger, a rapper, a garbageman, or a CEO – happy wife, happy life bruh. Thats probably the name of Jay Z’s next album.