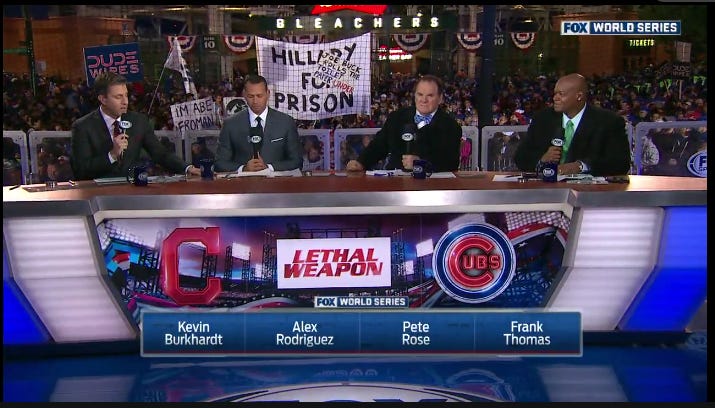 Big weekend for signs. Seems like every live tv set in the country is turning into College Game Day.

Let’s take a look at some signs featured during the World Series in order from fun to too serious. It’s about ethics in TV sign use and one sign in particular was flat out upsetting.

First up is Dude Wipes.

Dude Wipes is seemingly the new Washington State flag at College Game Day. Everywhere I looked on TV this weekend, I saw a Dude Wipe poster in the crowd. Can’t hate on that marketing effort. I respect the hustle from our pals at Dude Products.

Lastly is the rude ass people who brought the sign that suggests that Joe Buck rolls the toilet paper under. I get that a lot of people aren’t Joe Buck guys. But, there’s gotta be a cruelness line that we refuse to cross. We can’t tolerate this type of bullying in the crowds. Have some taste, some decorum, some decency. What’s next? Are we gonna tolerate signs that say our favorite announcers fold their toilet paper instead of crumbling which obviously gives you the best and cleanest butthole? Is that where we are headed? I hope not. I really hope not.