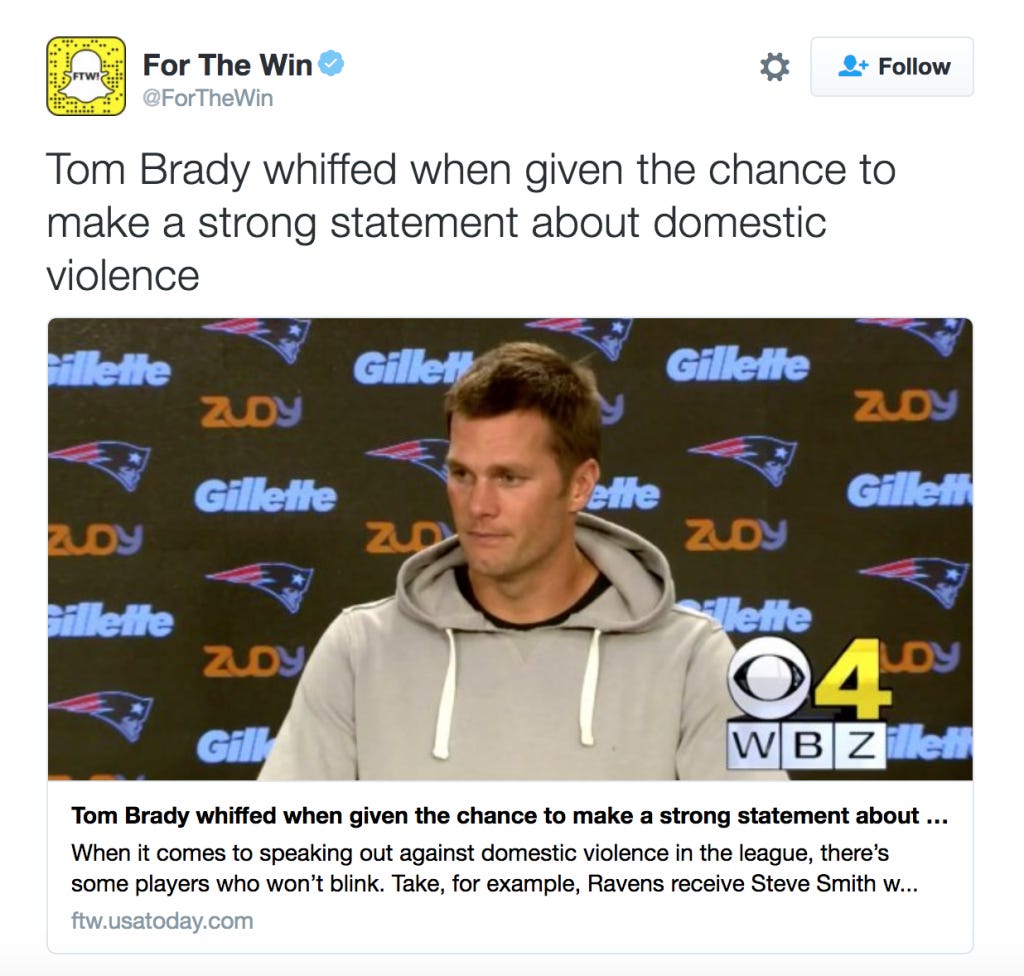 I’m not even going to link to the article because it’s terrible and stupid, but the author was upset that Tom Brady didn’t speak out strongly against domestic violence when he was on Kirk and Callahan this morning. She was very upset that Tom Brady, like Ben McADoo “whiffed” when he had the opportunity to make a strong stance against domestic violence. Fair point except for the fact that Brady actually very clearly condemned domestic violence and spoke about it more than he has spoken almost anything, as far as I can remember. But, the author just cherry picked his one quote where he said he’d “stay in his lane” in regard to suspensions then left out the other stuff he said while speaking about domestic violence for almost five minutes…

(Globe) – “I think it’s the league’s issue,” Brady said. “I’m trying to stay out of all that. I’ll let them handle it. I think that’s their responsibility. I certainly don’t condone any part of domestic violence, and I think it’s a terrible, terrible thing, but I think the league’s gotta handle those types of things.”

“I’m just going to stay in my lane. Like I said, it’s up to them to decide whatever they want to do. I’m just gonna stay out of any kind of my opinion. I certainly have opinions, I just don’t really care to share them.”

But when pressed further, Brady opened up.

“I grew up with three sisters, and I was very fortunate to learn from a loving father and a loving mother how to treat and respect women,” Brady said. “I have a daughter of my own and domestic violence is a horrible issue. It’s a tragedy when it happens. Any type of abuse or bullying of people who can’t defend themselves or fight for themselves, I have no respect for that.

Maybe I’m a bit biased, but if you ask me that’s coming out pretty strongly. Of course, he didn’t say it should be six games or anything like that because Tom Brady is never going to question how teams or the league handle things. He’s always going to say he’s only worried about what’s happening at Patriot Place. But to say he whiffed on making a strong statement there is just downright false. I can’t remember anyone else in the league, certainly no marquee players save for Steve Smith, speaking at length about domestic violence like that. If you listen to, or read, the full interview you certainly don’t come away thinking, “Man, wonder what Tom Brady’s stance is on domestic violence,” but I guess if you pick the one quote where he says suspensions aren’t up to him then you could say he “whiffed” on addressing the horror that is domestic violence.