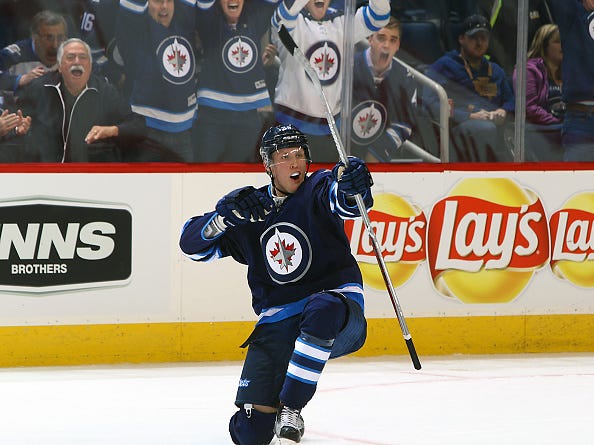 Four (4) months ago, the Toronto Maple Leafs made a decision. With the 1st overall pick in the 2016 NHL Entry Draft, they selected Auston Matthews. As soon as they grabbed Matthews, the decision was then made for Winnipeg on who they’d be taking with the 2nd overall pick. The next name announced at that podium was Patrik Laine. Which takes us to last night. An event that needed no build up, no superflous adjectives. Toronto vs Winnipeg. Matthews vs Laine Round 1. And even though the Maple Leafs built up a 4-0 lead, the Jets weren’t *Finnished* yet. (Do you get it? Because Laine is Finnish. Holy shit that sentence kicked ass).

I’ve said it once. I’ve said it twice. I’ll probably say it at least 13 or 14 more times. All Patrik Laine needs is half a second with the puck and half an inch of space to make something happen. Sure, he didn’t even look at the net before shooting but a kid this talented knew that pulling that shot near-side would be a total mind fuck for Freddy Anderson. And all of a sudden, the comeback tour is on.

Sick sick sick play for Nikolaj Ehlers. Had all the time he needed to let one fly there. But to have the patience to fake the shot and send it across the ice to Laine like that? Takes some seriously meaty testicles. And poor Freddy Anderson. That puck is in the back of the net before his brain even registers what is happening. So it’s off to overtime we go. I think you know how this one goes….

You couldn’t script it any better even if you had fucking Martin Scorsese on the job. Matthews comes down on a breakaway with a chance to negate the entire comeback, and gets stuffed trying to go 5-hole. Puck comes back down the other way and why wouldn’t Patrik Laine try to bury the next shot? 2-on-1. Plenty of guys think pass there but remember what they said in The Replacements? Winners always want the ball when the game’s on the line. 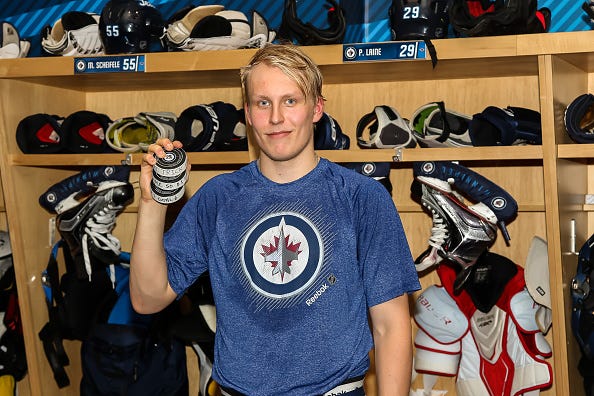 Game, set, match. I don’t give a damn about CORSI. You and your Fenwick can go kick rocks. All I care about is that head-to-head, Patrik Laine is up 1-0 on Auston Matthews and 3-0 on the scoresheet. Until that changes, he’s the better player and everybody in Toronto should be fired for passing him over.

Not only did Laine get a hat trick. Not only did he get the win. But he also had the quote of the night.

Incredible. The balls on this kid. Auston Matthews is clearly a Marlins Man kid as he eats a nice big slice of humble pie every time he talks to the media. Laine on the other hand? Kid is cocky and arrogant and the perfect foil to make this a legitimate rivalry. He also looks/sounds the part to be the villain.