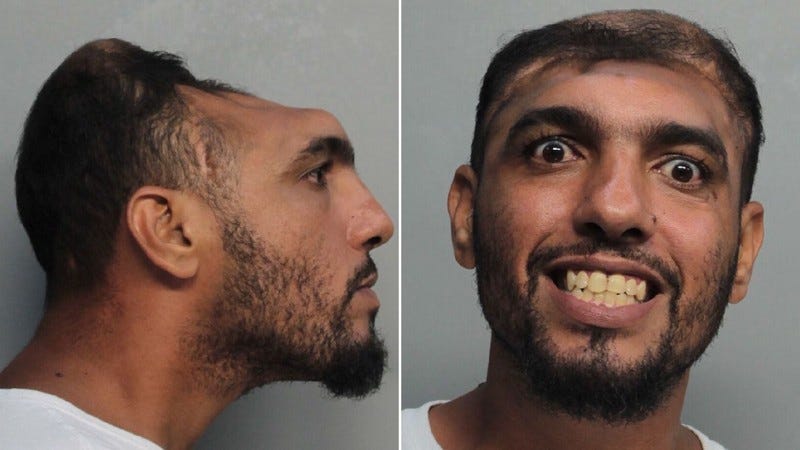 AJC – A Florida man, who gained exposure a few years back for his head injuries leaving him with a deformity, was arrested on Monday after he set a mattress on fire.  Carlos Rodriguez, 31, set his mattress on fire at his Miami-area home on Monday, WSVN reports. Rodriguez was arrested and charged with arson and attempted murder because the investigators found he intentionally set a fire that put the lives of others at risk, WSVN reports. Rodriguez is known for his mugshots since a “large portion of his brain and skull” were removed due to a car crash in which he “flew through his car’s windshield” and landed head-first, WSVN added.  According to The Daily Mail in 2012, when he was brought in for allegedly soliciting prostitution, forms filled out by police allegedly contained no name and a description that read: “half a head.”

Well well well. Look what the cat dragged in. Its our old buddy Carlos Rodriguez. Ole half a skull lookin face ass. When you been in the blog game as long as I have there are certain characters that are permanently burned into your brain. For example, Eddie Toborgotta – the guy who was arrested FOUR times for fucking inflatable pool rafts in public.  Eddie could pass me on a crowded Manhattan street and I’d recognize him. Same thing with Charlie Half Head. I could probably draw a perfect outline of his demented skull, straight from memory. I’ll never forget when police just wrote “half a head” as their perp description. He’s a Barstool Hall Of Famer.

And here we are, 4 years later, and he’s being arrested for arson and attempted murder. I’ll be perfectly honest I’m shocked it took this long for those charges to come down the pike. If I had half a head it would be drug charges, prostitution charges, and murder charges. Exactly in that order, roughly like 3 months apart after I lost half my head. I’d have the biggest half head chip on my shoulder EVER. Mad at the world, total dick to everyone. Eventually I’d probably just try to smash people’s heads so I wasnt alone. Misery loves company.

What did shock me, is the manner in which he got this charge. Set a mattress on fire and get charged with attempted murder? What??? What the fuck is that about? That does not seem very fair to me. No doubt in my mind this is the City of Miami going “Alright now’s our chance we can get this half headed freak off our streets.” Just cooking up some completely unreasonable charges to get this guy out of society. Cant say I blame them. Half a brain, half a skull = get out of my community.