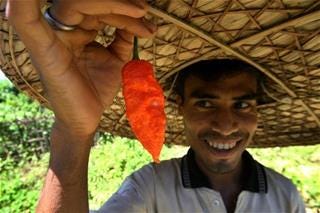 The ghost pepper is one of the world’s hottest peppers, with a Scoville rating of more than a million. So it might follow that you shouldn’t ingest it in more than tiny quantities.

And yet, the Journal of Emergency Medicine reports on the unusual case of a man who tore a hole in his esophagus after eating an incredibly hot ghost pepper.

The 47-year-old American ate a burger topped with a “ghost pepper puree” as part of an eating contest. YouTube is rife with video of people eating these things, so you can probably guess how this one went: The man started vomiting, profusely.

If you’re the kinda person who goes to a restaurant and orders a hot pepper because you’re a wild and zany guy, you kinda deserve to puke until the point your esophagus bleeds into your belly and splits in two.

I dont get the appeal of eating hot shit in order to impress other people. And I dont care what anyone says, no one likes food THAT spicy. No one. You eat ghost peppers and shit like that because you’re an asshole or are being an asshole. It’s the same shit in these videos every time. Guy eats the pepper. Guy cries about how hot the hot pepper is. Guy asks for more milk and then Guy goes home to have violent and unrelenting diarrhea for a few hours. None of your friends are laughing during the vicious diarrhea session, though. They are at home watching TV, probably another terrible NFL game, and have already forgotten all about your Ring Sting Having Face Ass.

My favorite ghost pepper video is this dude from Hawaii. This dude’s friends telling him to sit down and meditate to get through the ghost pepper heat is a bizarro world stuff. Meditate through the heat might be dumber than Connor saying he can mind-control his level of drunkness on this week’s Zero Blog Thirty. I’m glad this pepper almost killed this surfer bro. He deserved it.