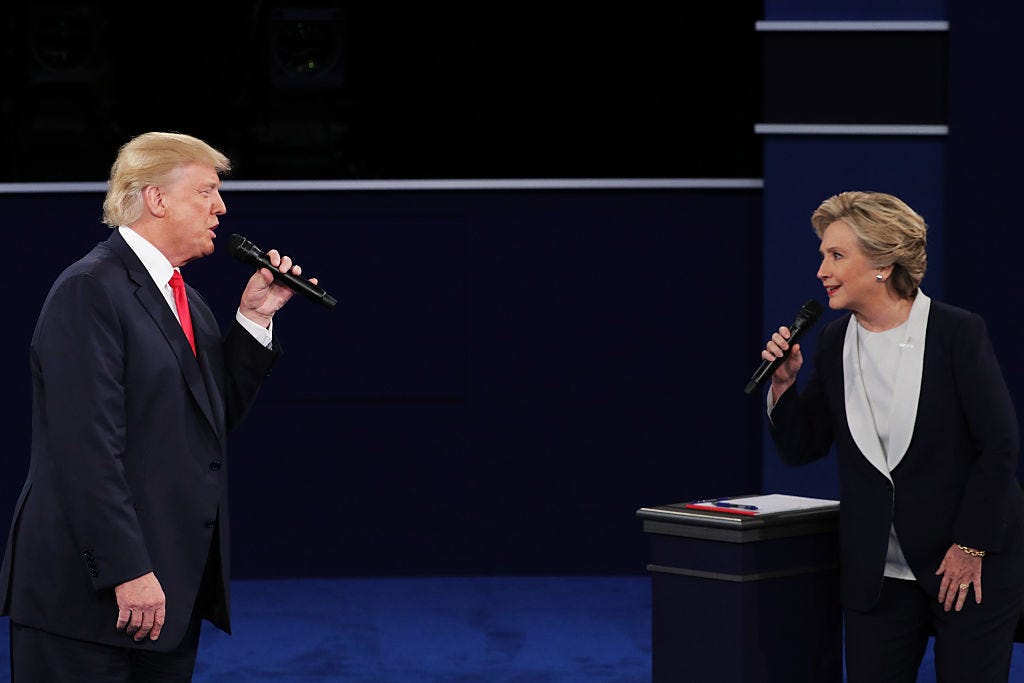 It’s the eve of the craziest election in modern history. I don’t need to detail everything that’s happened — you, me, and even people in the fucking Philippines know what’s gone down. They know how absurd it’s been. They know how disconnected from policy and substance it’s been. But alas, here we are. Millions have already voted and, tomorrow, damn near one hundred million Americans will hit the polls and vote.

I’m fairly confident most of us are on the same page with this — fiscally conservative, socially independent/slightly liberal. We want to be able to save and spend as much of our own money as possible, while taking care of all the people and all the things that a Democratic country needs to take care of, and we mostly don’t give a shit about what people are doing in their bedrooms or in their free time.

So let’s start with taxes. Let’s see how each candidate’s plan will affect your paychecks. Here is a quick graphic showing the different percentages each income group will pay in federal income tax.

Donald Trump will cut your taxes. You will be paying less taxes if Donald Trump becomes president. However, most economic professionals believe Trump’s tax cuts will be detrimental to the U.S. economy long-term and will cost nearly $10 trillion dollars in national income over the next decade.

Hillary Clinton will increase your taxes. Unless you’re poor and have a very low income, in which case we got you and we’re happy to help you out, you will pay more under Hillary Clinton. For most Americans in the middle-class income brackets, it’s not THAT big of an increase. It won’t break your bank. But you will be paying more in taxes.

Hillary’s plan believed to add between a couple hundred billion and $1.1 trillion to the national revenue over the next 10 years. Again, if you need more specifics, get out of here. You now know the gist of how these plans will affect your paychecks and how they will affect the U.S.’ overall economic situation and future (no one can truly predict the economic future, hence why there are so many god damn finance bros out there grinding to figure it out).

For the rest, we’ll go rapid fire. Here’s a clear yes/no listing of how they stand on different questions. On some of these, the candidates have switched their stances; I have included what they’ve most currently declared.

Should Interrogation Techniques That Some Consider Torture, Such as Waterboarding, Be a Legal Option?

Should the National Security Agency (NSA) Continue to Collect Phone and Email Metadata on US Citizens?

Should the United States Close the Guantanamo Bay Detention Camp?

Should the United States Send Ground Troops to Fight ISIS?

Is the Nuclear Arms Deal with Iran Good for America?

Should There Be an Independent Palestinian State?

Should the United States Continue to Build the Fence/Wall along the US-Mexico Border?

Should Undocumented Immigrants in the United States Be Allowed to Become Legal Residents?

Should the United States Allow Syrian Refugees into the Country?

Should the United States Authorize the Keystone XL Pipeline to Import Tar Sand Oil from Canada?

Was the US Supreme Court Decision Legalizing Same-Sex Marriage a Good Decision?

Should the Death Penalty Be Allowed?

Should Law Enforcement Be Allowed to Use Racial Profiling?

Should the United States Continue the War on Drugs?

*Worth noting that the next president will likely appoint FOUR new Supreme Court justices. That is incredibly important for the future of our Judicial Branch.

Is Obamacare Good for America?

Should Abortion Be Legal?

So that’s a quick run through. That’s the main shit on which I think you should know where they stand. If you want a longer, more comprehensive list click here (pro/con) or here. I’m not going to tell you how to vote — I really don’t give a shit who you vote for. If Trump wins, it’s great for my job. Great for content. Finding shit to write about becomes infinitely easier. If Hillary wins, it’s likely more of the same for 4-8 years and, despite how much we shit on Barstool and the blog life, my life’s pretty great. Don’t have much to complain about. Plus anytime something technically fucks up on any Hillary blog I can just write a “Clinton Machine Strikes Again” blog and the people eat it up. Easy schmeezy.

But we’re all different. We’re all in different places living much different lives. My advice is this — pick the policies that you care about, decide how much temperament and Washington entrenchment and personality weighs in your decision, and pick one, if you haven’t already.

Tomorrow we’re going live at 7:30PM. Me, Dave, Kat, the PMT crew, dozens of remotes like Tiko Texas, Michael Portnoy Esquire, etc. Should be a wild night with no issues/problems/failures whatsoever. Can’t wait.

As always, if I fucked something up please email me: riggs@barstoolsports.com. I had to run a damn mile today and my entire body + brain is mush. This blog could say anything to be honest, don’t even remember writing it.