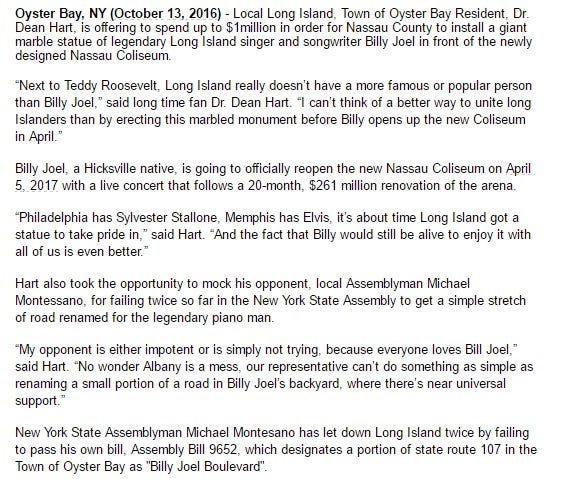 As we are embroiled in an absolute slobber knocker for the Presidential race, it’s easy to overlook the local races that are heating up. We are probably going to have a shit ton of awful commercials and muckraking as Election Day nears. And nothing we will see will be as brutal as somebody accusing his opponent of not being a big enough Billy Joel supporter to Long Islanders. That’s basically killing a man’s reputation to his entire community. Career homicide. I haven’t met a Long Islander that doesn’t love Billy Joel. I’m pretty sure when Long Islanders introduce themselves to people, they say their town’s name and then say how far it is from where Billy Joel grew up for reference.

That being said, it is absolute lunacy that nobody has named a road or something after Billy Joel. Guy has an unbelievable catalog. Songs to laugh to, songs to cry to, songs to dance to. Everything’s covered. If you would have told me that there was a town named Joelville, I would believe you. Then again, I also think they should be a Mick Foley Highway and at least a parking garage named after Ashanti. And the fact the entire state of New Jersey hasn’t been named after Bruce Springsteen is the biggest upset in the history of mankind.