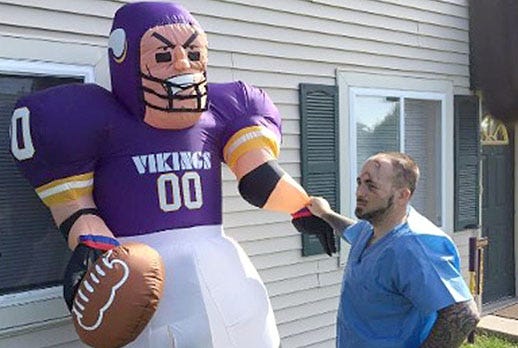 Channel 3000- A Stoughton man was stabbed seven times after he confronted a man who was vandalizing his Minnesota Vikings inflatable yard decoration. Police told News 3 that a 21-year-old man started damaging the inflatable with a box cutter and was confronted by the owner. The owner, 36-year-old Dave Moschel, was then stabbed seven times with the box cutter. “He probably thought it was funny, and maybe his buddies thought it would be cool to come slice it up,” Moschel said.

Police were called at 7:12 p.m. Sunday to the 700 block of South Van Buren Street. Moschel said he was sitting down to watch a football game Sunday when he heard someone outside. “You hear him slicing this guy up, come outside, and ‘Hey, what are you doing?’ Confront the guy,” Moschel said. “He takes his razor knife or whatever he had in his hand and we just go on the ground and start rifling around.”

Moschel said he’s lucky to be alive and so is the man who stabbed him. “Luckily, I didn’t have my concealed carry on me at the time,” Moschel said. “Ninety-nine percent of the time I leave the house, I never leave without it. And this is the one time I did. I’m kind of glad I did, because he would have been dead, and I would have had to live with that.”

Moschel was taken to a hospital, where he was treated and released. He received multiple stitches for wounds to his forehead and under his eye. He said he’s recovering well from the cuts and said nothing or no one will stop him from showing pride in his favorite team. “(The inflatable) is going to get a little piece of Vikings duct tape put on there and it’s going to be blown up every day of the week from now on,” Moschel said … The 21-year-old was arrested on suspicion of reckless endangerment and criminal damage to property

What the fuck Wisconsin? I thought you guys were all lovable midwesterners that spoke like the mom from Bobby’s World and the only people in your jails were the products of a broken legal system (cough, Brandon Dassey, cough) or people that the characters from Fargo were based on, just with different names at the request of the survivors.

I get that nobody wants to see their rivals’ logos and colors in their face every day. You put up that inflatable behind enemy lines knowing that there is a strong to quite strong chance of someone fucking with it sooner or later. There are dickheads in every corner of the world. Since the stabbing happened in Wisconsin, I imagine the stabber was a Packers fan. You have to be a Grade A asshole to be giving a Vikings fan shit just because they are actually having a good season. Is it too much to let a usually tortured fan base have some fun when their team looks awesome? The Packers haven’t had to worry about the quarterback position for more than two decades and Green Bay still gets called Title Town for a bunch of championships the Packers won in the 60s. Give the Vikings fans a break.

And I love this guy casually dropping the “I’m usually carrying” line. He should buy one of those giant ass inflatables that are like 50 feet tall now. Because nobody was going to fuck with him after he survived 7 cuts. But absolutely NOBODY will be fucking with him now that they know he packs heat 99% of the time. If we are being honest, I would have run away from him once I saw the tattoos. Regardless, if you destroy another man’s private property because of sports, you probably deserve to get smoked.