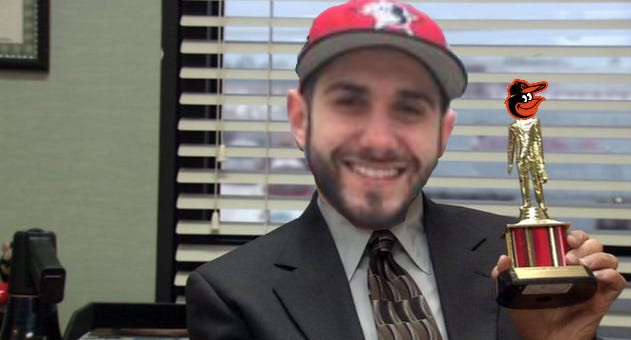 It’s been a week since the Orioles were put six feet under, so that gave me some time to sit back, think about the season, laugh that the Red Sox won the same amount of playoff games as the Orioles, and put together my second annual RDTies. We will be looking at the best games, best moment, Most Valuable Oriole, and some other awards. From Wieters walk off on Opening Day to Kim’s homer late against Toronto and the eventual playoff exit in that same building up North, it was a fun season, and I’m already itching for 2017, lets start the show. 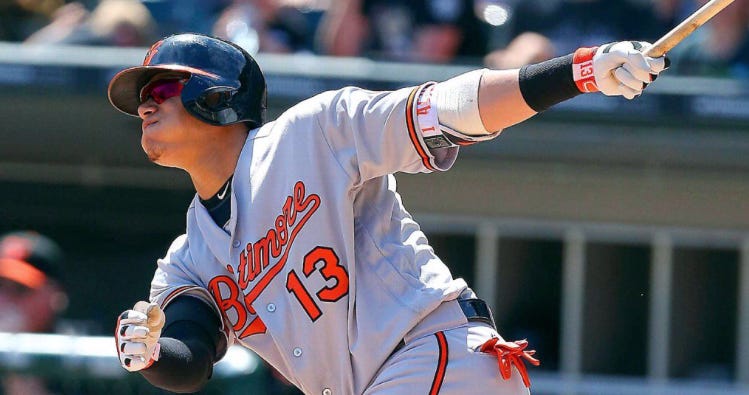 I can’t get over how good Manny Machado was this season. He didn’t lead the team in homers or runs driven in, he did lead the team in average (.294), runs (105), OBP (.343), OPS (.876), hits (188), and doubles (40). As always, he’s right in the middle of the Gold Glove discussion at third base, he also played some short when Hardy went out and gave us a glimpse of what could be coming as Hardy is getting up there in age. Manny started out the year on fire, and if it wasn’t for a rough last week of the season for him, he would have finished at over .300. He found a home in the 3 spot on the lineup, and with protection from Mark Trumbo and Chris Davis, he flourished.  The home run power we saw last year was even more impressive this year with his 37, he drove in 96, beat the hell out of Yordano Ventura, and likely will find himself gathering some votes for MVP. The guy showed that he truly is a star in this league, and if the Orioles can get an extension with him, he could be the face of MLB for years to come. Manny Machado, your 2016 MVO.

Pitcher Of The Year- Zach Britton 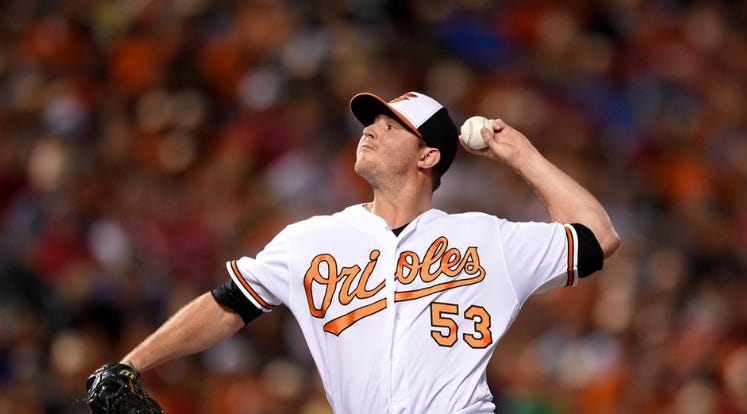 Only one answer here, the guy who had the best season EVER by a reliever. 0.54 ERA lowest by a reliever EVER, 47/47 in save opportunities, 74 Ks in 68 innings pitches, only 4 ER given up all season, and a 0.84 WHIP. Just unreal stats, he should get some votes for Cy Young, because it is give to THE BEST PITCHER in the game, not just best starter. How valuable was Britton? If he blows one save, the O’s probably miss the playoffs, and Buck Showalter doesn’t even have a choice to put him in or not. Still blows my mind the best reliever didn’t get into a do or die playoff game, but at least he will be fresh for next season. Britton wins Pitcher Of The Year in a landslide.

Hands down my favorite moment of the year. EVERYONE hates Ventrua and the Royals, the guy is a hot head, throws at you if he doesn’t like what you’re doing. He didn’t like the O’s hitting the ball all over the park on him so he decided to throw at Manny. Well guess what, he threw at Manny one time too many times. Machado decided to take it into his own hands after being plunked and took Ventrua down. Ventura is a punk who should have got his ass beat a long time ago, glad Manny charged the mound on him. If you watch the video, you see Yordano throw a punch, Manny ducks it, and connects on his face. Yordano only tried to get big again after half the team was holding him back. Guy is a clown.

I’ve been talking up Trey since he last season, saw him in Bowie a few times, and he put up great numbers in the minors. Figured it was only a matter of time before we saw him up in Baltimore, but with a logjam ahead of him at first, he didn’t get the call until late in the season due to an injury to Steve Pearce, but when he got his chance, he delivered. He homered against Eduardo Rodriguez for his first career hit in his second career at-bat, and in his next start, went yard off mental midget, David Price. Mancini didn’t stop there, he then homered in his third straight start to begin his career, this one off Robbie Ray. Just a great start for a great kid, he has all of Baltimore excited for next season, could we see him in the DH role against lefties? I think so.

This one was hard, could have gone with Wieters birthday home run against the Angels, Jonathan Schoop with his ninth inning, 2-out homer against the Giants, Trumbo hitting Carrabis’ house in a 1-0 duel against the Sox, Schoop’s extra inning double against the Dodgers, but this Hyun-Soo homer was the best. The O’s looked like they were going to lose another game and drop out of their Wild Card spot, Kim came in as a pinch hitter with Michael Bourn on second, and launched the biggest homer of his baseball career. That win coupled with the O’s win the next day sent them into a tie with Toronto. As we all know, the O’s fell in Toronto just a few nights later, but man was this win a great one. Congrats Hyun-Soo, come collect your RDTie. 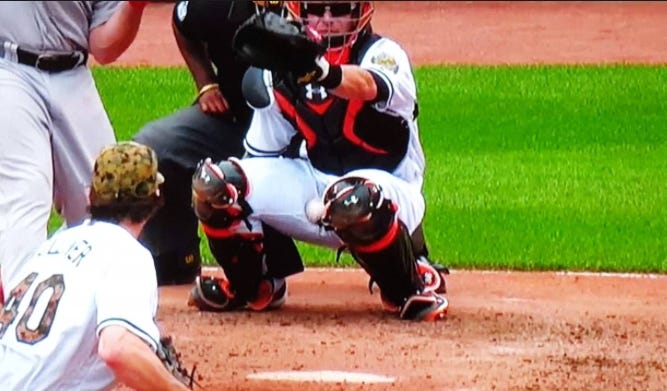 This was a close one. Fan favorite, Caleb Joseph had a rough year, both at the plate, and behind it. He was hit in the balls by a ball in late May, and missed the entire month of May. He had surgery on his balls, but they never announced the injury, or what happened during the surgery. That horrific injury led to Joseph not getting constant at-bats, and he could never get into a rhythm. He wasn’t lighting it up before the injury, he was batting .182, but he got so much worse as the season went on. He finished the year batting .174, an OBP of .216, and 0 RBI in his 132 at-bats. 49 games, 0 RBI, just insane. Congrats Caleb, you really worked hard for this RDTie.

Most Improved From 2015- Jonathan Schoop 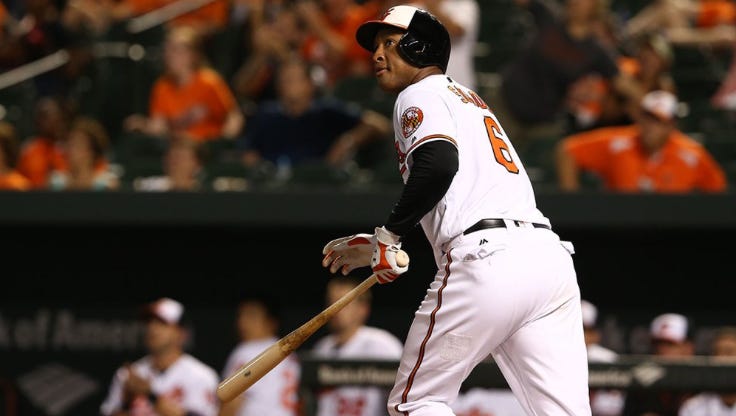 This was a tough one, I wanted to go with Kevin Gausman for his performance. Lower ERA, established himself late in the season as a top of the rotation guy. Could have gone Trumbo, who was traded from Seattle to Baltimore for idiot tweeter, Steve Clevenger, and went from 22 homers last year, to an MLB leading 47 this season. But the most improved was Jonathan Schoop. He stayed healthy, and we saw the power really come around. 25 home runs, 82 RBIs, and 38 doubles and for the strong-armed second baseman who really made a name for himself outside of Baltimore. His defense was a big part of this season too, he showed off an insanely strong arm, has great range for a guy his size, and formed one of if not the best double play tandem with J.J. Hardy. Congrats to Schoopy for the first of manny RDTies.

Blast From The Past- Dylan Bundy 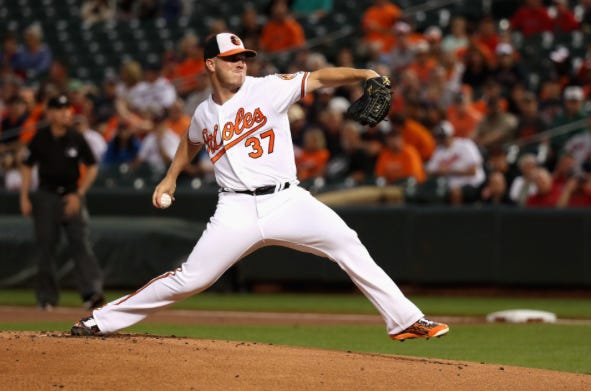 This was a name many Orioles fans thought we would never see, he was bigfoot to us. All we ever saw was grainy footage of him from afar. Figured he would be hurt, have his arm fall off when he was getting in his truck or something. Not this season. Bundy had to be on the opening day roster, they hid him in the bullpen for a little. For a guy who has had every arm and shoulder injury in the book, and hadn’t pitched in the bigs since 2012, he wasn’t bad at all. Bundy jumped right into MLB action and as a reliever went 2-1 with an ERA of 3.08 in 22 appearances. He eventually was stretched out to be a starter, and again, outperformed what we all thought. As a starter Bundy was 8-5 with an ERA of 4.52 with 72 Ks in 71 innings. He isn’t the high school Bundy we saw touching 100, but he’s learning to use that curveball and changeup to go along with his fastball. We saw him get a little tired down the stretch, and that is to be expected from a guy who has had the ups and downs like he has. Bundy will be a big part of the rotation next year, we’re all expecting big things from him.

The Frederic “Dickballer” Of The Year- Mike Wright 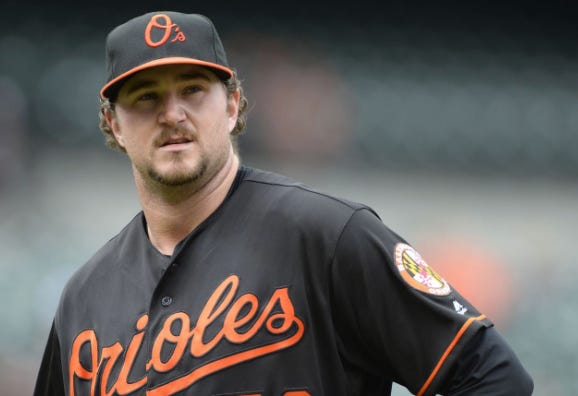 Chicago guy Frederic started this earlier this year, and Mike Wright fits this word perfectly. He’s just a dickballer. He has all the physical tools to be a starting pitcher in this league, but hasn’t put it together yet. Maybe he will figure it out, maybe he won’t, but he was terrible this season. Wright made 12 starts, gave up 12 homers in just over 63 innings, went 3-4 with a 6.22 ERA and a WHIP 1.508. Dickballer. He made six appearances out of the pen, but wasn’t much better. Your dickballer of the season, Mike Wright.

The “Holy Shit, How Did He Hit It There?” Award- Chris Davis

Davis had a decent year by his standards, .221 with 38 homers, and a career high 219 strikeouts. Woooooo boy that’s a lot. But whatever, we knew what we were getting with him. But for him to go oppo on top of the Orioles bullpen is a god damn shot. You can see your boy and @AnnoyingStatGuy in orange behind the fella in black down there, and I thought Trumbo was at-bat because I didn’t think a lefty could hit a ball that far, just unreal power by Crush. 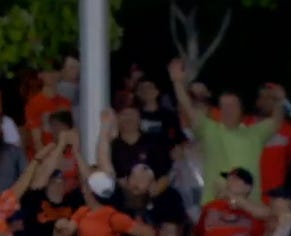 This guy is the god damn worst. When I’m having a bad day, I love to twitter search “@JasonLaCanfora” and “sox” and look at all the people remind JLC that he is a god damn fraud and used to be a “diehard” Red Sox fan until the Orioles became good again in 2012. Guy is such a loser. He’s a terrible NFL “insider” and an even worse “Orioles” fan, get this guy so far away from my team, this fake Baltimoron does not deserve to root for the O’s.

He called the season a wrap on August 17th above.

August 21st he declared the season over again.

But don’t worry, once Jack from All Time Low asked him about playoffs, he was 100% back in. 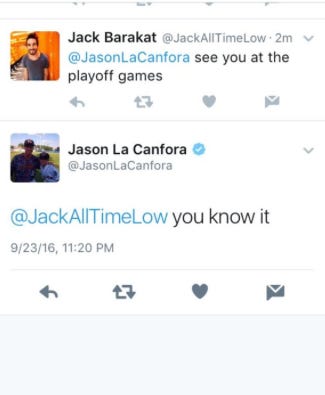 And the next day, he was right back on the team! I’ve never seen a “fan” declare a team was dead so many god damn times, only to suck their dick the very next day. His timeline during the Wild Card game was unreal. 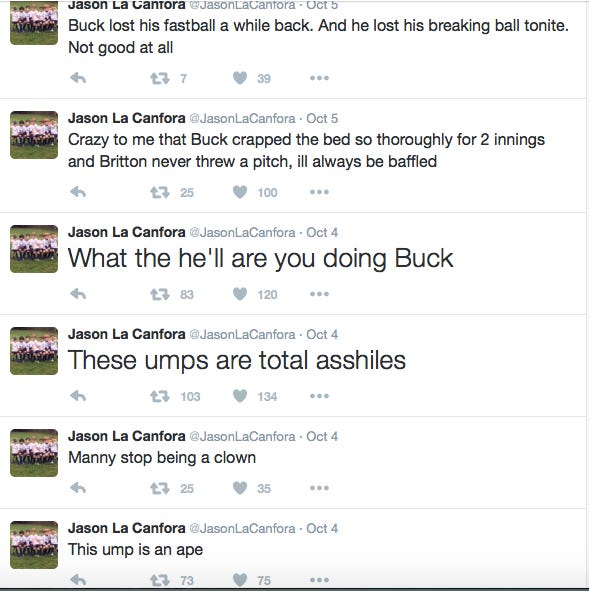 On behalf of all of Baltimore, quit this act, go back to your Red Sox, and stop rooting for the Orioles, no one here wants you. Congrats JLC.

There you have it, the 2016 RDTies. Thanks for coming, hope it was as good for you as it was for me. I’ll be on the twitters, follow me @BarstoolRDT