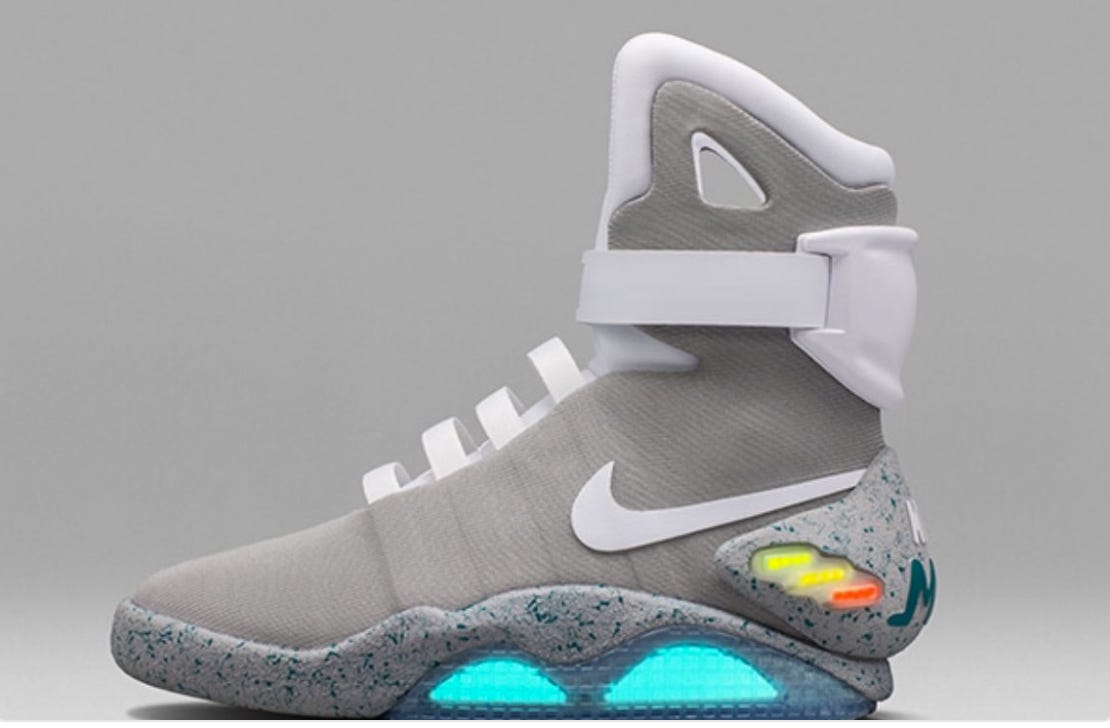 SneakerNews – Entries for the 89 pairs of Nike Mags have officially been closed, but Nike has embarked on a three-city auction tour of the only pairs that can actually be purchased. It started with a live auction in Hong Kong that just came to a close, and according to a live stream video posted in the SneakerheadUK Facebook group, the winning bid was 84,872 GBP, which converts to $104,267 (according to Google). The next auctions for the last two remaining Nike Mag shoes will take place in London and in New York City, and we expect that final bid to be even higher. We’ll have a video from the live auction event soon.

A hunnid. Thousand. Dollars. That is

In 2011 Nike released 1,500 pairs on eBay. The auctions raised over $4.7 million with that drop. Which if you do the math comes out to like $3,000 a shoe. I think most pairs were going for about 8k. Now the 2016 release has been handled much differently, with the public only able to access them through the $10 raffle tickets. But there are also three live auctions going on in Hong Kong, London and New York. Like some shit from Taken where these ballers are bidding on kidnapped virgins or something. We’re talking about a pair of sneakers, man. For one hundred thousand fucking dollars! I know Back To The Future is the greatest of all time. I know they self lace. I know if you’re entrenched in the sneaker world these are like a goddam artifact that belong in a museum.

But I mean cmon now. $104,000 for a pair of sneakers that were intentionally designed to look preposterous in order to portray the future in an absurd manner? You’re a dick. I guess its like any other piece of memoribila – there are always assholes out there who will pay ungodly amounts of money just to say “I have something and you dont.” And I guess when you clearly got the money to burn, who cares. But coming from a dude who stupidly blows a lot of money on kicks this is just as obnoxious as it gets. Check that – the third most obnoxious as it gets because London and New York will be even higher. I bet NYC hits 250k.