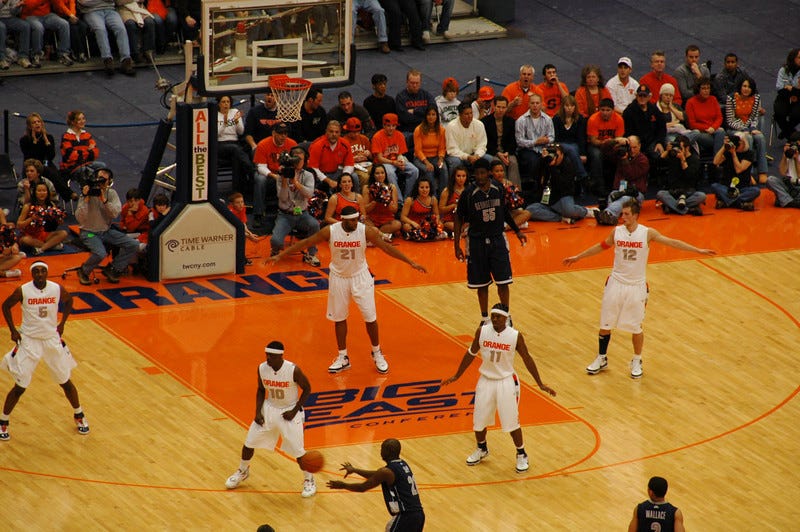 This is your warning before you read this article. It will be very basketball ‘nerdy’ and taking a look at the intricacies of zone defenses in college basketball. For those that like visuals, you can still read along as there are clips that will detail what I’m talking about.

With the NCAA changing its rules last year to the 30 second shot clock while also increasing the freedom of movement foul calls, there were expectations we’d see more zone defenses in the game. The reasoning behind it being the ability to waste a little bit longer on the shot clock, forcing teams to take more rushed jumpers.

Now, there was a small tick in the play of zone defenses, up only about .5% across all of college basketball. Here’s a graph that SI.com’s Luke Winn put out, showing the percentage of zone defense in the halfcourt over the last five seasons. The increase of zone in 2013-14 is due to that being the first year of the freedom of movement initiative. 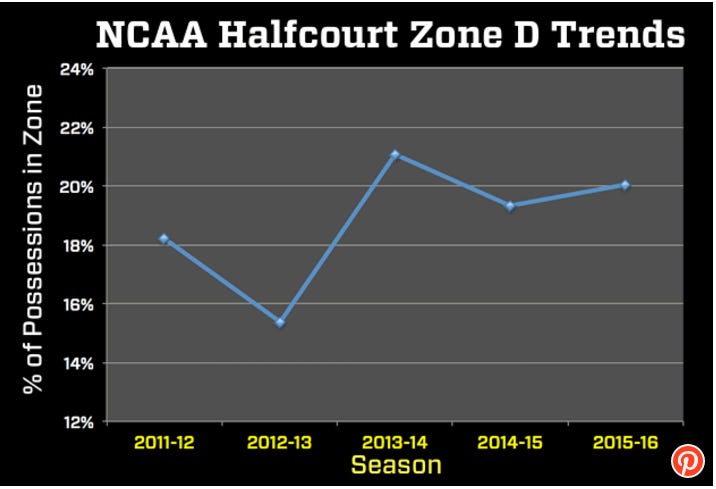 While the aggregate zone rate stayed fairly the same, what we did see were top teams start to mix in more of a zone. On top of that it’s already been conversation this offseason with John Calipari saying multiple times Kentucky will run a little bit of zone this year. What I want to do is take a look at the different zones we see in college basketball and how teams use them. We’ll use Syracuse, Villanova, Xavier and Duke as our examples. The reasons for these teams? Syracuse is obviously known for their 2-3 zone. Villanova used zone to help key their title run. Xavier began to run a zone last year that made them strong defensively and a No. 2 seed in the NCAA Tournament while Duke used the 2-3 zone to make up for a short bench and lack of defensive talent.

Let’s start with Syracuse, who obviously has lived in a zone defense for the 100 years Jim Boeheim has been the head coach. KenPom had the Orange has the 17th best defensive team in the country last year (NCAA Tournament included) as their defensive efficiency ranked at 93 points per 100 possessions. Synergy Sports graded them even better as they gave up just .803 points per possessions in zone defense in the halfcourt.

While Syracuse calls their zone a 2-3, it’s actually more a 2-2-1. The key with their zone is the athleticism of the forwards/wings as they like to play them more vertical than horizontal. In this clip against UNC you can see how vertical the zone gets, especially on the wings. The guards pick up the ball above the 3-point line as you can see Roberson and Richardson play on the wing. This is where the 2-2-1 comes in more than the 2-3. Coleman acts as the ‘1’ in the middle of the zone as he’s responsible for anything in the paint, as you can see him trail Brice Johnson up at the free throw line. As the turnover happens, look at where everyone is.

The Cuse zone is nearly impossible to copy just because of how long they run it and the little things like the vertical movement of the players – something that most aren’t used to running. What we will see though is a lot of basic zone like Duke.

The Blue Devils absolutely sucked on the defensive side of the ball last year. They ranked 86th in the country according to KenPom and that even feels a little generous. Duke ran zone 22% of the time last year in the halfcourt. They were average-good at running the zone but it was used to avoid foul trouble and also try to give a short bench a chance to catch its breath. This is the type of zone we’ll see more of, especially with the likes of Kentucky this year.

It’s an incredibly basic zone, which is easy to implement and can be put during the season within one practice. In this clip you’ll see how they drop back into the 2-3 after some semi-transition by UNC. Compared to the Syracuse zone, look how low the wings are for Duke. They are playing well-below the free throw line, while the guards are up by the 3-point line. This is where teams from grade school to college learn to attack the middle with a guy flashing to the high post. When the ball gets into the high post, Duke does have a guard – Matt Jones in this case- dive down a little to force the kickout while Plumlee takes a step up, daring Johnson to shoot that 15-footer. Backside wing dives to the low block, trying to take away the high-low play.

Again, this is a basic zone and the one I expect to see more teams run throughout the course of this year. I don’t think we’ll see the jump like we did in the 2013-14 season, but zone usage should rise between 2-5% this year.

There will be a couple of teams that have the breakout zone year like we saw with Xavier last year. The Musketeers are an interesting study when it comes to the zone, because they simply weren’t known for running it at all. They ended up a respectable 22nd in the country in AdjD as they ran zone 32% of the time last year. That’s a massive jump as the year before was a miniscule percentage.

After seeing some examples of the 2-3 zone, this is the 1-3-1 that Xavier implemented. Again, something we could see teams try to copy this year, especially if they have a long, athletic guard to put at the top. Hint: this is what Kentucky could run that Calipari has alluded to due to D’Aaron Fox’s length. Usually Xavier ran this with JP Macura up top, due to his size and wingspan. Here the Muskies use Sumner – another longer guard and we see it out of an inbounds play. Much like Syracuse, this is a vertical zone as Sumner pressures the ball up near the half court line. The wings are staggered, but above the free throw line while the back is in the middle of the paint. The purpose of this zone is to force turnovers and speed the offense up. Watch how Xavier rotates and Sumner plays, nearly his back to the basket. They want the ball to be swung up top, allowing for their easy rotation and trap.

Lastly we have Villanova, who used their zone to jump start the national title run – especially in the game against Kansas. The Wildcats ran zone 24% of the time in the NCAA Tournament and graded out as excellent per Synergy Sports. They forced turnovers 20% of the time, which is an unreal number and only gave up .678 points per possession. The zone Nova used is called ‘tandem’ in most places because of the pressure put on by the guard – in this case Ryan Arcidiacono. That’s one key to this zone. The other is the play of the man in the middle – again in this case it’s Daniel Ochefu.

The ‘pressure’ by Arcidicaono is nothing more than a mental thing. It forces UNC to at least look at a defender and not get careless in the backcourt. Once the ball crosses the halfcourt line, he immediately drops back to what looks like a regular 2-3 zone. The difference in this one is how horizontal the back line plays. The only time a wing gets above the free throw line is when UNC loads up the left side of the court, brings the wing on the right side up to the elbow and swings it. Jenkins in this case comes up just past the free throw line to give a little bit of a 3-2 look. However, once the ball is swung, Arch runs over, allowing Jenkins to drop back down. What makes this zone great is how they pack the zone – a key in running the 2-3. They want you to waste time and shoot a 15-footer, something lacking in a lot of players games this day in age.

I know it’s a lot there and sounds real nerdy, which it is. But these are four different zones run across America that you should get used to seeing. Midnight Madness is this Friday, so expect to see teams start playing this in practice and reports coming out of the possibility of zone defenses.