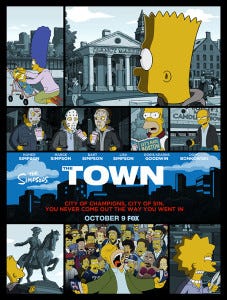 So The Simpsons finally visited Boston last night in their 28th season on the air (28? Means you have about a 1 in 3 shot of getting a Golden Years ep in reruns). It was by no means an instant classic but had some chuckles. Like most original Simpsons viewers, I tapped out somewhere in the mid-teens after the show’s creative peak gave us some of the greatest episodes in the history of the medium. In “The Town” episode’s pre-airing PR, we were reminded about how much of the writing staff is either from around here or went to Harvard and used that experience to inform the episode’s writing.

All of which had me wondering: Why do they refer to people from South Boston as “Southies” (three separate times)? How can they refer to Southie as “that part of town (that) has the towniest townies of any town?” This line must’ve made half of Southie cringe. If you’re claiming to have the lowdown on Boston in-jokes, you need to know routine Boston lingo and tribes (if not, it becomes D’oh!-chester).

Townie = a person from Charlestown. In Boston, there are no Southie Townies. Or anywhere else for that matter. It’s been Charlestown Townies since Jack the Barber christened the town football team with the name in the ’50s. (Also, lower-case ‘t’ townies are in rural/small college towns, not major cities.)

Even though the rivalry has been essentially dormant after years of blood feuds, Southie and Charlestown folks still bristle when mistaken for the other (busing killed what was the best HS hockey rivalry in the state, where the fights in the stands outnumbered those on the ice). And anybody from Boston knows the difference between the two.

A few more Simpsons buds for your Columbus Day bowl…

*The writers did go pretty hard at the  Boston Americans and their fans though. Calling the team repeat cheaters (though the mascot proved to be legal in a callback to the Ravens game). Making their fake Gronk look like Lenny from “Of Mice And Men”. Grumpy, hooded coach. Showing the fans as smug and obnoxious (admittedly spot-on). “Brady” saying to a dreamy Homer, “Do your job, Homer” was a quality laugh though.

*It took 26 whole minutes before the show got it in its first and only “Boston is racist” line. Thought we were gonna sneak by unscathed for a minute. Homer (talking about city’s negatives): “Not to mention the unspoken racism.” Marge: “It wasn’t that unspoken.” That was it.

*WELCOME TO, ER, AH, QUIMBY, MASS. CITY OF MAYORS was a clever take on Quincy.

*Bulger’s Bowl-O-Rama. With a Whitey Bulger look-alike talking to Homer. I don’t know, man. The Whitey shit just feels kinda forced at this point, wherever it’s coming from. Just not much to laugh at there.

*Shoutouts were also given to the dear departed “Lechmere’s” and the very much missed “104 BCN The Rock of Boston. “Cumbie’s”, the Bill “Spaceman” Lee Planetarium, “Filene’s Basement’s Attic” and “Duncan’s Donuts” also made appearances.

*Bart was obsessed with a fictional Boston gangster flick titled “Mass Ave.” (with a Fribble-drinking crew) that had him looking up to the Irish mob.

*Loved the cameos by Bell Biv Devoe, Steven Wright, Hawk from “Spenser: For Hire”, and the Robert’s Parish church with the Chief in the stained-glass window.

*Homer was drinking a Brockton’s Best beer and got a job at the NECKO candy factory.

*This was, by far, the best sight gag… 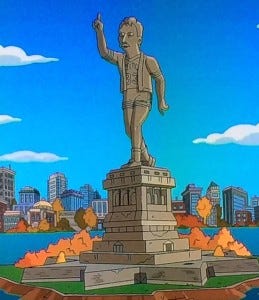