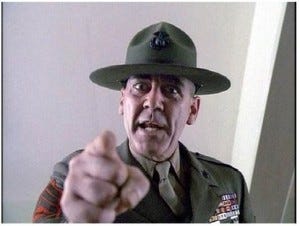 So I’ve been writing at Barstool here and there since June, mostly covering Sixers stuff, so its understandable if you haven’t read my shit or if you don’t know who I am. A pretty persistent reaction to almost every piece I post is “who the fuck are you?” A completely a fair question, even despite previous introductions by both Smitty and myself. Usually when people ask me who I am or what I do, it’s easier to show people than to tell them, so I show them this video.

Me just being brutally mean to a fat guy. The video got all kinds of crazy reactions, but the true madness didn’t start until about a year after the video came out. I started getting messages from people saying that the video had helped them lose weight. At first I thought nothing of it, that they were just being funny saying that they put down the cheeseburgers or whatever. But then I started getting pictures. Like legitimate before and after pictures like it was fucking Dan Marino on Nutrisystems. Testimonials, everything.

Then, yesterday, I got the craziest one of all. A lovely young lady name Gaye Winetraub poured her heart out about how life changing this all was. Here, I’ll let you read: 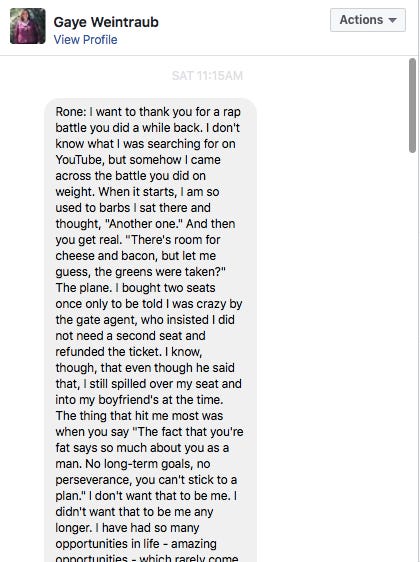 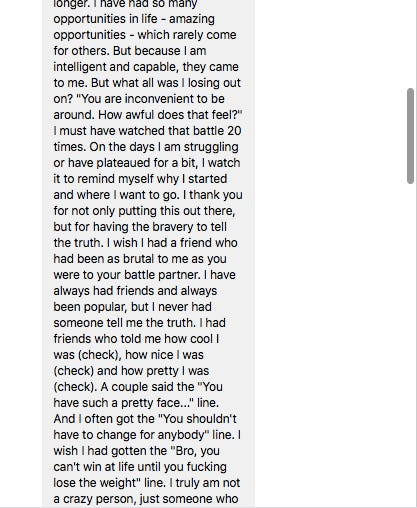 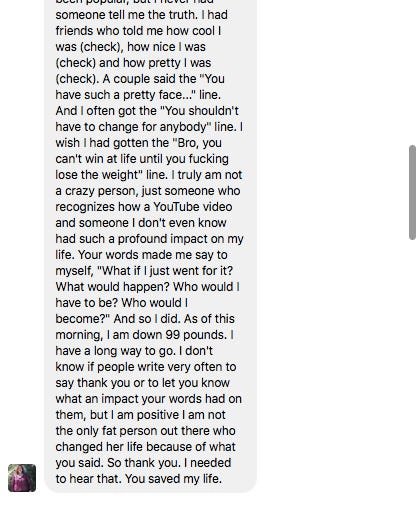 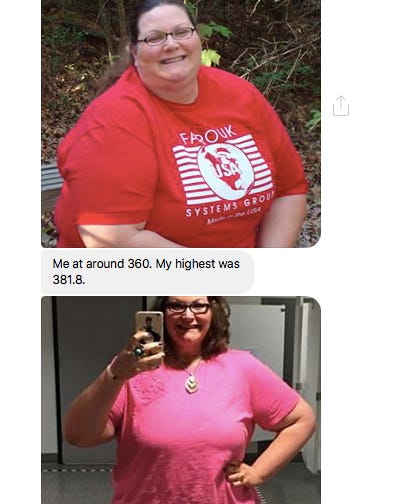 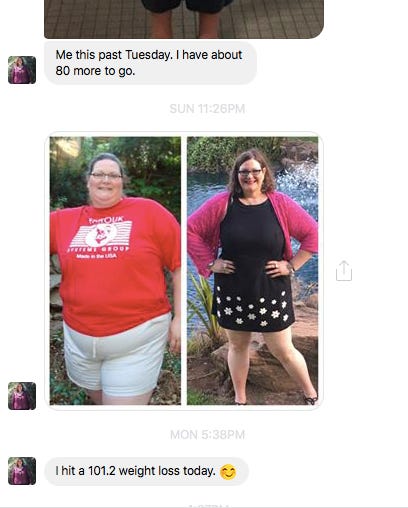 One hundred and one point two pounds. Are you fucking kidding me? First of all, thats awesome for Gaye, I hope she’s loving her new, hot, svelte self. But more importantly, for me?? This is a lot of power that I didn’t even know I had. I can change, not only people’s minds, but people’s bodies? I feel like fucking Magneto now, with the ability to mold humans at my very whim. So I guess my question is, what should I do with my new ability to melt weight off of people simply though the spoken word? Do I start life coaching? Do I start rattling off infomercials promising results? All those guys are selling are before and after pictures with testimonials and now I have those too. Do I apply to be a coach on the Biggest Loser and go toe to toe with Jillian Michaels? Teach that bitch a thing or two about how to motivate someone? Should I just say fuck it and become a drill sergeant for the Marines and sculpt young American noodles and neckbeards into heroes, while simultaneously becoming a hero myself?

I’m paralyzed by all the options.