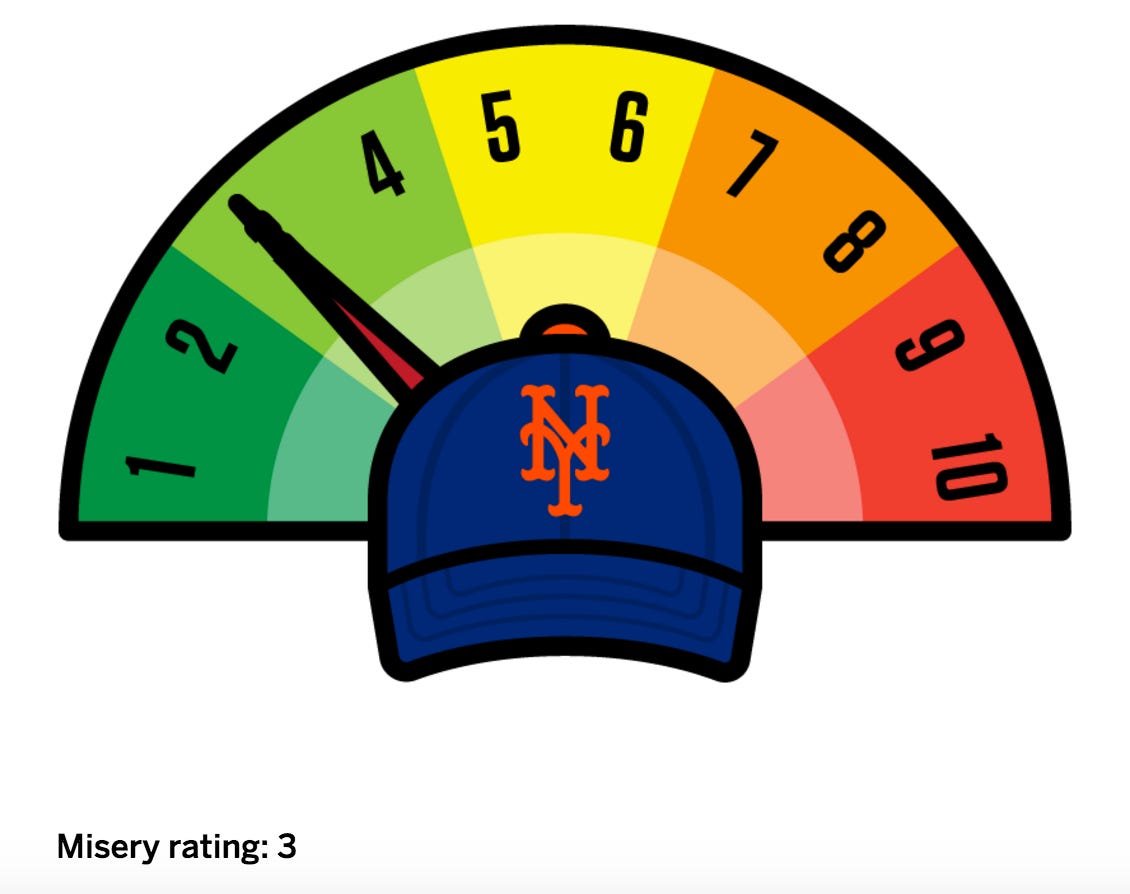 ESPN – Misery in sports is a mixture of long-term gloom from enduring decades of losing seasons as well as the heart-breaking torment of painful postseason losses which either keep you from winning the World Series or keep you from even reaching it. Which is worse: Six months of losing which repeatedly ruins entire seasons or as little as one minute of pain which will last for years, if not decades? That’s hard to say, but enduring both is the worst of all. Many of this year’s postseason teams know this full well, given that eight have not won a World Series in at least 23 years and that their fans have gone a combined 426 years without celebrating a World Series victory (including Washington, where the city’s last toast came in 1924, albeit with a different franchise). Who will end the misery by winning the World Series? Impossible to say, considering the unpredictable nature of the postseason. But which fans have suffered the most? Here’s a ranking of the misery which fans of those postseason teams have endured.

I kinda hate the “I’m the most miserable fan!” “No I’M the most miserable fan!” arguments. Because so many fans want to be considered the most miserable so they almost relish it and would rather stay miserable. So while I hate to have a “Who has the smallest dick?” competition here, I cannot sit back and listen to this nonsense. When I opened up this dumb ass article I saw that the Mets had a Misery Rating of 3. I misunderstood the Misery Meter and thought 1 would be the most miserable, and I was STILL mad. I thought 3 wasnt low enough. Then I find out that its actually out of TEN??? 3 OUT OF 10????? Are you fucking kidding me????? What a bunch of goddam NONSENSE that is.

Theres this movement going on…its been bubbling for a little while…and I’ve just ignored it until now. But I’ve seen some buzz from strangers on the internet that Mets fans dont have it that bad. That the occasional World Series appearance somehow erases all the other MISERABLE shit thats stacked against us. That other teams have it worse. And I’ve kinda bitten my tongue but I’ve had enough.

Lets start with the first argument – the Cubs havent won a World Series since 1908! The Indians havent won since 1948! Guess what, guys? The Mets havent won during my lifetime and thats all I fucking care about. Just like I dont care about all the rings the Yankees won in the 1920s, I dont fucking care about the decades and decades of Cubs futility before I was ever on this planet. As far as I’m concerned, the only time period that matters to me is the time period I’ve been alive. And I’m 0 for 31. So if youre my age we’re all in the same boat as “Never won a World Series” whether its 1986 or 1908.

Secondly – but at least you’ve made it! Yea, the Mets made the World Series in 2000. And subsequently lost to their crosstown rival and helped complete a New York Yankees Dynasty. Literally the worst possible outcome imaginable for Mets fans. The one year the assembled a fantastic team they run into a dynasty and get mortified in front of the entire city. 2015 they made it to the World Series and handed the Royals all 4 wins. They HANDED THEM THE WORLD SERIES. Errors on errors on errors. All that they needed to do was catch and throw the ball and they win the Series with ease. And what about the other years? 2006 was absolutely, 100% their year to win the World Series and it ended with Carlos Beltran looking at a called third strike and losing to like the 79 win Cardinals. The other years they were supposed to contend? The most embarrassing collapse in baseball history in 2007, and another collapse in 2008 just for good measure. And peppered in between those blips on the radar are about a billion losing seasons, dozens of putrid contracts, and literally an infinite amount of embarrassing off the field PR moves. Did I mention the international Ponzi Scheme in which our cheap ass owners were the most affected victims? Where the financial ramifications are still felt to this day? The bad trades, the clubhouse card games and haircuts, bleach in reporters eyes, firecrackers at fans, an endless list of failed prospects, drug use ruining the two best players of a generation. Castillo Drops The Ball, Tom Glavine Game 162, The Oliver Perez Experiment, K Rod beating up his dad, Tony Bernazard taking off his shirt, Ball 4 Kenny Rogers. Duaner Sanchez cab accident. Contact. The list DOES. NOT. END.

And then the most important aspect is how fucked in the head Mets fans are and the shit they have to deal with sharing a city with the Yankees. Mets baseball is a way of life. Its a cross you bear. Its not a hobby. You’re not just there for fun. Its like a full time job and you dont get any money and you can never succeed. And right across town, right in your fucking face, are Yankees fans who are getting promoted every single year. Working in corner offices making million dollar bonuses while you rot away in the mail room like a fucking loser. Mets fans are Sisyphus rolling the ball up the hill and Yankees fans are the guys at the top that push us back down to the bottom every year. The Cubs dont have that dynamic. The Indians dont have any other franchise in the city at all. When Cubs fans lose for the billionth year in a row, they say “aw gee shucks!” and they hit Wrigleyville for some beers and joke about how the Cubbies are gonna get em next year. I witnessed it first hand in the 2015 NLCS. It was just like one big “Well we almost made it!” party. Indians fans are all in the same boat. The whole city of Cleveland loses together and suffers together and has no choice but to all rally around each other for the next season.

Mets fans lose and they have their bully older brother spit on their face and give them a wedgie and belittle them until they are psychologically broken. Mets fans lose and have to get embarrassed as they walk the streets of their own city. Youre heartbroken and then on top of it your mortified and angry and you want to argue and fight and you cant because there is ZERO argument because of all the aforementioned things.

So go ahead and tell me Cubs fans and Indians fans are miserable too. But dont you dare…dont you fucking DARE… tell me I’m a 3 out of 10 on the misery scale. There’s misery in Queens that other cities couldnt even wrap their fucking brains around it if they tried.

Which is the reason why if somehow the Mets ever do get the job done, we’re going to celebrate harder and happier than anyone can even comprehend. 108 years of “Oh well!” and 68 years of “Well at least we’re in this together!” doesnt hold a candle to 31 years of “I live my entire miserable existence behind enemy lines in my own home and cant go a second without getting my faced rubbed in everyone else’s success.” And if Mets fans are the only ones that can understand that dynamic, so be it. It will make it that much sweeter when we win.