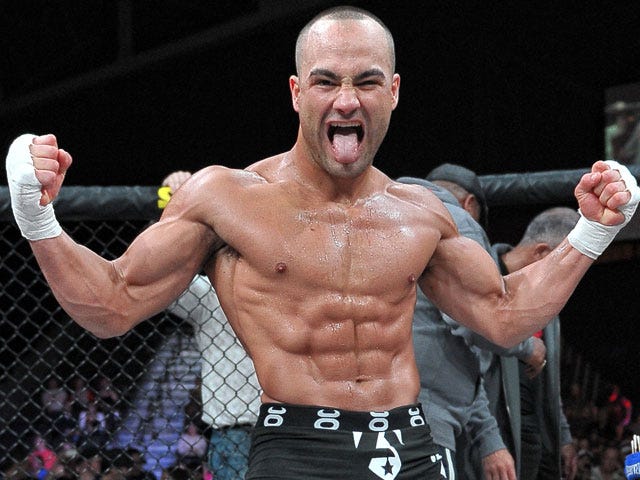 [Editor’s Note: I know my weaknesses in life all too well. Ice skating. Grammer. Women. And you can add MMA knowledge up there, as well. But I am a Philly guy, so I hereby blindly support anything and everything from this city. However, I’m not going to spew out shit I don’t know because you deserve better than that. So here we have a guest writer Bennett defending our boy Eddie Alvarez against tynanny and mass oppression. Enjoy.]

This one’s for Philly—Kensington’s own, the Underground King, Eddie Alvarez. He’s making his first title defense against arguably the biggest icon MMA has ever seen. A packed Wentz Wagon/Soul Arena League whatever/JoJo practice picture session/Phillies… end of season, and all lightweight title defense might put this city on track to what’s known as a “turn –around.” We should be excited.

For those who don’t know Eddie, you’re looking at a 2x Bellator lightweight Champion, typical Philly dude (jean shorts, pencil sideburns, oversized Dawkins jersey, all around shit kicker). Went to North Catholic, and has a huge Philly following wherever he’s fought. I went to the Pettis-Alvarez fight in Boston and it might as well have been K-Lot of a Kenny Chesney tailgate (for philly fans, not mainline girls vomiting on themselves). Since signing with the UFC, he’s only lost one fight and that was his first, to Donald “Cowboy” Cerrone (a title contender himself)—albeit by decision. He went on to take split decisions from Gilbert Melendez and Anthony Pettis. Then, he starches Rafael Dos Anjos back in July for the title. No sirens or parades when it happened, but if he takes down McGregor you can bet we’ve got bragging rights over the Emerald Isle… and Nate.

After Tuesday’s press conference, you can see the month leading up to the fight is going to be a circus. Anything with McGregor is a circus—but that's why he’s the highest grossing MMA athlete to date. His trash talk and promotion is borderline Rock/Stone Cold stuff, so you can’t expect Eddie to keep up with it. But Eddie’s in-octagon arsenal/experience resembles Nate Diaz’s, wrestling, striking, and gas tank. Connor’s last fight exposed that lack of gas tank, granted it was at a heavier weight against one of the best true mixed martial artists the game has seen. Can Connor tag Eddie early and end this thing before people get back to their seats? Eh, anything can happen. But let’s not forget, Eddie’s chin is tougher than Joey Vento’s meat.

So am I saying this is a lock for Eddie? No way (at +110 I’d wait until the fight gets closer and the line to move). You still have training camp/injuries that go along with training camp/rumors about strategies (Connor “touchbutt” reference). What I’m saying is you can talk to anyone in that Frankford area and they’ll tell you stories of the, “Underground King.” Eddie’s a neighborhood guy—G and Westmoreland bro, ever heard of it? For your safety, hopefully not. He’s not a Joe Frazier or B. Hop, but fucking stand up for the Philly guy one time. This is our Rocky. Connor is Apollo.