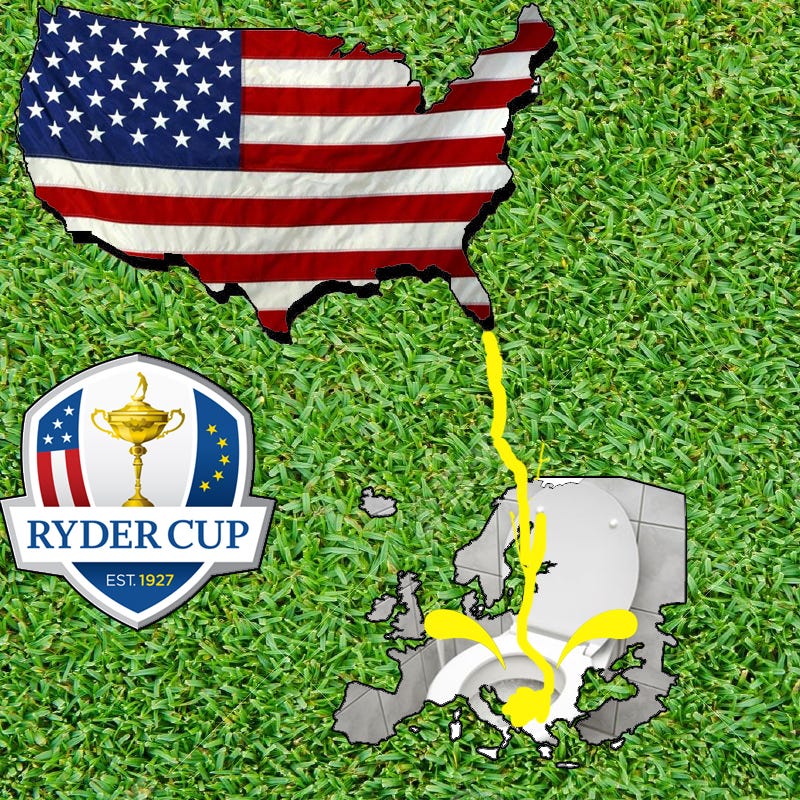 The Ryder Cup is off to a electrifying start as the Americans have made a bunch of Eurpoeans waste more money on greens fees since the last global climate initiative we wouldnt sign. But as the boys put their John Hancocks on their scorecards and wait for the afternoon matchups the Euros are waiting around cussing at each other in a bunch of different languages and basically cursing there ancestors for not taking their chances on the Titanic.

Now typically I dont care about golf. If I wanted to watch a bunch of spoiled rich guys walking around slack jawed trying to acheve the lowest score I’d watch a Dolphins game. Hell, its been so long since the last time Europe lost a Ryder Cup that babies born in France in 2008 still haven’t finished their first lunch.

But anytime the United States takes on a country like Europe in sports I am going to show up. And Its been a blowout at Hazeltine so far. People forget they don’t sell Fireball in Europe on account of theres anti-freeze well I guess maybe they should of been more concerned with keeping ice water in there veins than in the livers judging by the scoreboard.

Its gotta be doubly embarassing losing to a bunch of people who dont even care about the sport to begin with. Uh hey idiots this is Amerca where golf is like our 7th most important activty that we do to get away from our wives. You walk through the woods carrying a bunch of wood and metal stuff and try to shoot birdies. Its basically hunting for people who arent aloud to own firearms anymore. Do you know what a degenerate you have to be in America to get your guns consfiscated? Golf isn’t a national pastime here its just basically a way for our rich people to be able to claim egaltarianism by not explicitly forbidding minorities from joining there country clubs just in case they ever get called a racist in a Presdential debate.

Hey If European countries are so great how come everyone there has a passport? Its like your girlfreind telling you that size dosen’t matter but she keeps a bedside stand full of magnums “just in case.” In America your born and you work then you die, and if your lucky you get laid a few times 0n the weekends to someone whose way out of your league. No need to try and waste time and money traveling to a series of countries that are 3 hours apart from each other but speak entireley different languages and eat different foods when “gimme nother McDouble” is the same in Indiana as it is in Santa Fe.

The dummy Euro’s had alot of trouble gauging yardage on the American course. Everything’s based on the power of 10 in the metric system so they have to feel out of place in Minnesota where highway ditsances are measured in gaps between how long its been since you actually laughed at a prarie home companion joke.

Plus English golfers shouldnt even be aloud to play on account of the Brexit. Thatd be like the United States still honored guys like Jefferson Davis and Robert E Lee by naming buildings and statues and stuff after them. Sorry Europe maybe you should of thought about the Ryder cup before you let in all the refugees from all the wars that England helped us start.

In conclusion, the greatest water hazards and sand traps of all time were on Omaha beach,and folks, things dont look so great for Martin Kaymers team given Germanys history with leaders taking devastating shots from a bunker.

Checkmate, suck it, up yours.