The last time this thing was on American soil:

Is this the Americans’ year? You tell me.

Fan chirping Team Europe? at Ryder Cup practice?, is asked to put money where his big mouth is, for $100. Amazing. pic.twitter.com/mzlDzu2ASR

What I mean by that is that I was supposed to do a 15-min video interview with Peter Jacobsen of the Golf Channel today, but in a shocking stunning perplexing unbelievably unexpected turn of events, technology failed. We blew it. No interview. I was going to post that as the preview. A little video to wet your appetites, so this is a bit of a hurried job. These usually take me several hours and I operate on them over a few days — today, I have 45 minutes. Let’s do this.

On paper, we’re better. The American team has an average world ranking of 16. The Euros, 28. That’s good for us, but that’s about where it ends. Of the 10 veterans on the US team, 4 have losing records. 1 has a split record. Of the 6 veterans on the Euro team, all 6 have winning records.

The rest are rookies: 2 for the Americans, 6 for the Euros. Here are all the players’ records. 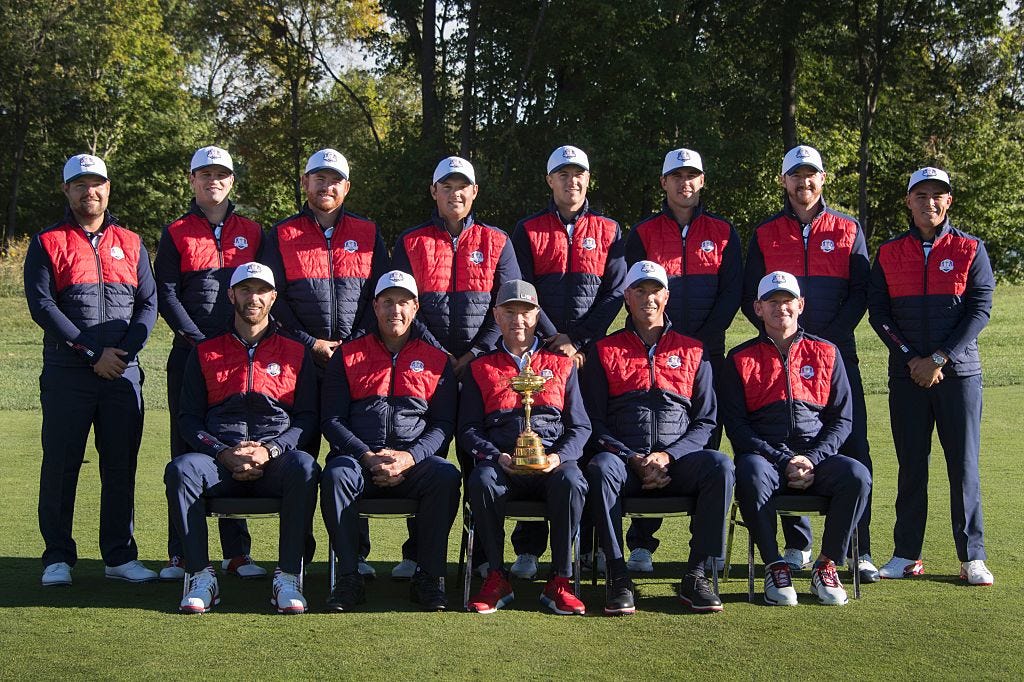 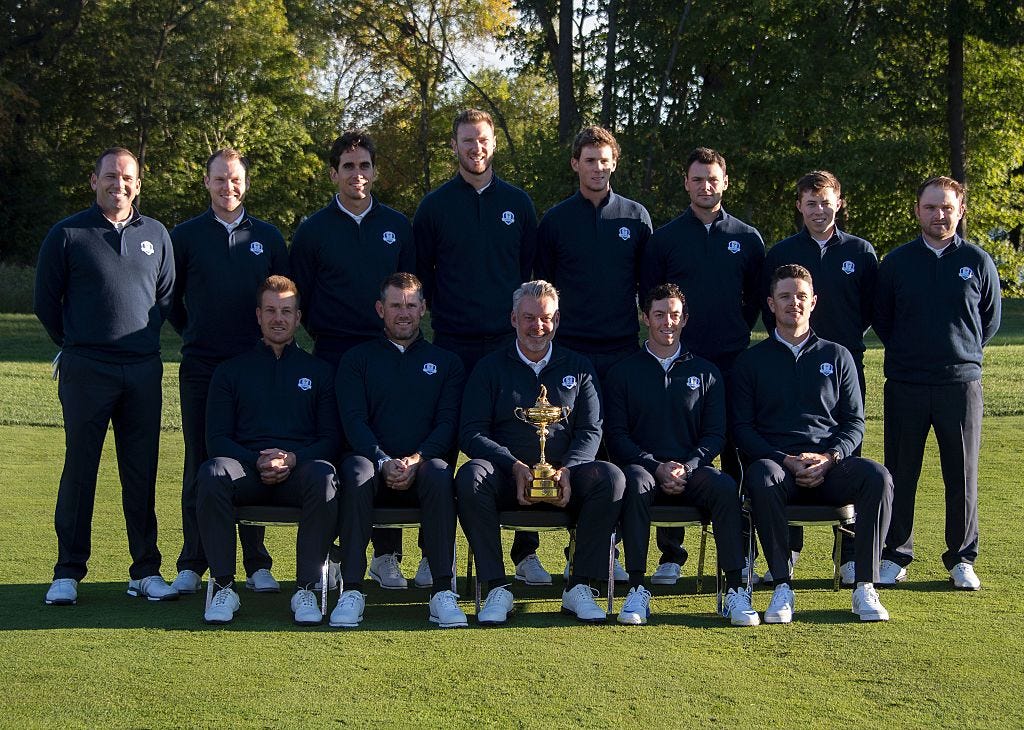 So those are the squadrons. Yes, we’re better in terms of world rankings and all that jazz. But we always are. It’s like that every year, and we’ve lost 3 Ryder Cups in a row. 6 of the last 7. We’ve only won 2 Ryder Cups since 1993.

Yet somehow we’re the favorite. Home soil matters, sure, but we were the favorite even before that fan hopped out there and buried that putt in Rory’s eyeball.

The hype for this Ryder Cup began IMMEDIATELY after the conclusion of the last one. In fact, it began during the conclusion, when Phil Mickelson openly chirped the shit out of Tom Watson for his captaining style. Within weeks, the hilarious “Task Force” was created and preparations for this year’s event began. 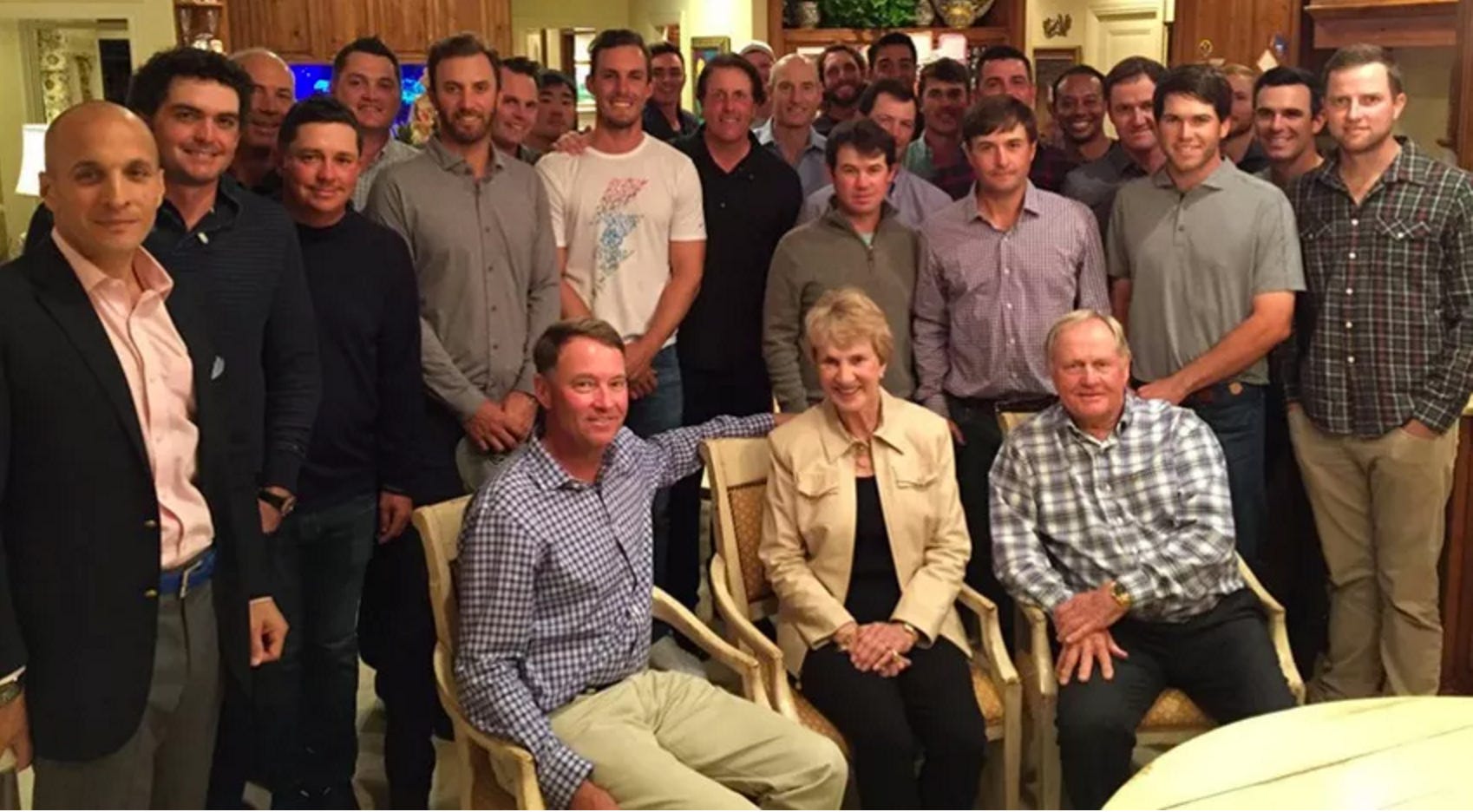 Is and was fucking ridiculous. Absurd. All it did was add pressure to the United States team going forward. All it did was say, “holy fuck we’re a disaster, we’re creating a massive clown show and that clown show better produce a Ryder Cup victory on home soil otherwise we’re out of options.” The Euros mocked it. David Feherty, who played for the Euro squad but openly roots for the Americans, called it “BS.”

Yet here we are. This is the product. We’ve got 10 veterans, half of which do not have winnings records, and 2 rookies. The rooks — Koepka and Moore — are STRONG. Based on how our other rookies, Spieth and Reed, performed in 2014, I have no concerns over them. They’ll be fine.

Where I do have concerns is Rickie Fowler. At 0-4-4, he has played the most matches in the history of the event without recording a win. That’s alarming. Rickie has proven to be clutch before, and I find it unlikely that he’ll retire with a horrendous Ryder Cup record, so maybe this is his year? 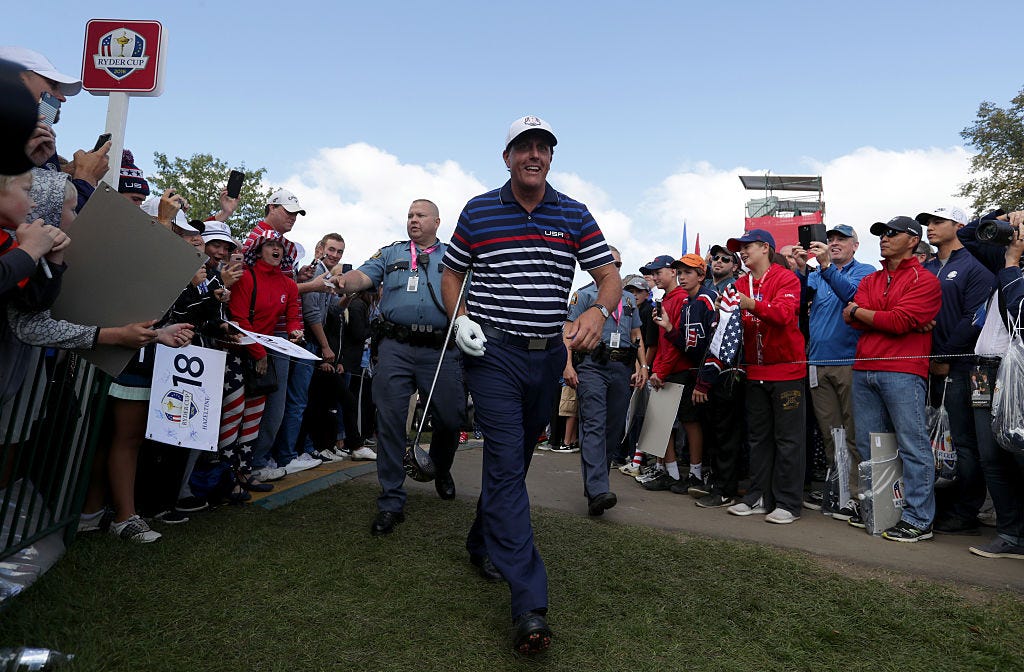 At the end of the day, this is Phil Mickelson’s Ryder Cup. I can’t remember another time when one player was so prominently figured in anything and everything Ryder Cup. Again, from the Watson rant to being a part of the Task Force to frequently discussing how often he talked with Captain Davis Love III and Tiger about the makeup of the team, he’s been right there. Oh and the chirping of Hal Sutton for pairing him with Tiger in 2004, and then the retraction of that chirp today. Phil has been everywhere and this, no joke, may be the biggest weekend of his career.

A lot to prove. A lot of his legacy riding on this weekend. Let’s hope he fucking dominates and carries the Americans off into the sunset with million-dollar champagne spilling out of that little Ryder Cup.

Rory McIlroy is a fucking terrifying force to be reckoned with. He’s coming off 2 FedEx Cup playoff wins, a FedEx Cup first place title, and he’s so damn lethal that he’s damaging holes from over a football field out.

Scary. Somebody make sure you give him the wrong tee times (just kidding, he still beat Keegan). As listed above, the Euros also have 5 other guys with winning Ryder Cup records. Justin Rose is 9-3-2 for fuck sake. Sergio? 18-9-5. Even Lee Westwood, who was a Captain’s Pick, is 20-15-6.

The achilles heal can only be that they have 6 rookies. It HAS to be. Half of your team being rookies, no matter what sport or venue or event we’re talking about, is dicey. It’s a point of concern. With Ryder Cup pressure and the American golf fans being (hopefully) obnoxious and disrespectful as fuck, the rooks may struggle. Let’s root for that.

The last time we were here, YE Yang took down Tiger in the 2009 PGA and straight up shoulder-pressed his golf bag right in Eldrick’s face on the 18th green.

Hazeltine is a beast. It tips out just under 7,700 yards, but will be playing shorter and easier this week. Lots of birdies. Greens running about a 12 on the stimp. The main reason it’s tamer? They’re keeping the rough around 3 inches, allowing guys to recover and stop balls on the greens from just about everywhere. We like that for Ryder Cups — it will come down to putts.

Played Hazeltine in July. A "right in front of you" Championship golf course where a big, blue Minnesota sky meets acres & acres of green pic.twitter.com/1u8uSM8M6j

Unbelievably, the Unites States are heavy favorites. We’re -190 to win, compared to the Euros at +150. Look, I’m an emotional person. I’m a patriotic person. I’m an American person. There is a negative infinity chance I bet on Europe. BUT if I weren’t, +150 looks reeeeeal good for those bastards.

Have to go US here. Big crowd thing, sending the boys out BUZZING.

I say over. I think this Ryder Cup is going to be incredibly close. Think it’s going to come down to the wire. That means match after match will grind its way to the 18th. Over 11.5, book it.

Yes. I know it’s unlikely. I get it. I’m pretty slick with the sticks and I’ve never even come close to one. But the superintendent went out of his way to say we should expect plenty of birdies and these guys will be firing at flags all weekend. Hole-in-one at 4/1, love it.

My money here is on US, 1-3 points at +275. I’m wildly confident that this will be a super close tourney, and I’m emotionally invested in the United States winning, so US by 1-3 points is how you make the dough. You’re welcome. 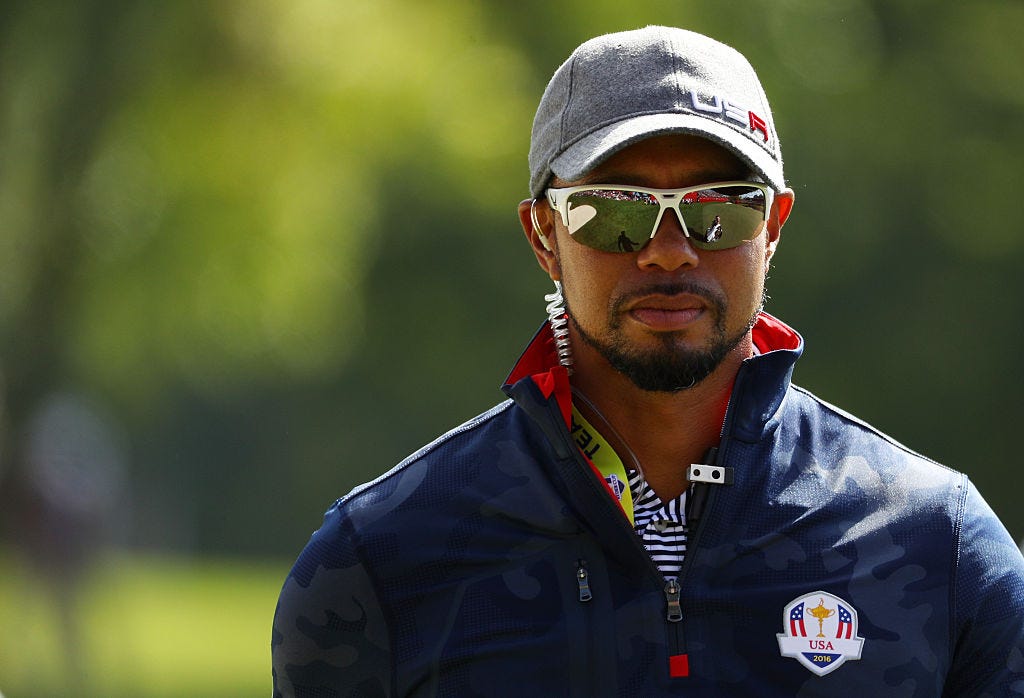 I will be posted up in the office in USA gear drinking Anheuser-Busch products from 8 AM tomorrow until 7 PM Sunday night. Cannot wait. Favorite weekend of the year to consume sports and nothing is going to stop me from enjoying this to the max, with the exception of European golfers. They are the only thing. Get over them and all of the glory shall be ours. USA all day baby. Fuck you Europe.

Danny Willett's brother, making clear what he thinks of US golf fans. Could be a long week for the Masters champ. https://t.co/QtgRxK9TGJ pic.twitter.com/p5iJcxcowD 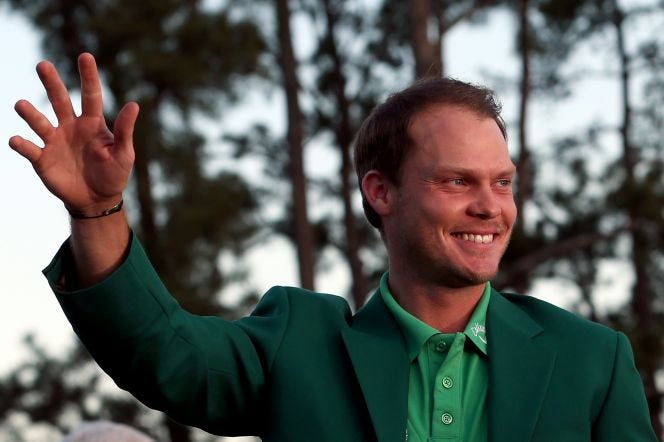 Will be (trying) to shoot interview with Peter Jacobsen midday tomorrow. Keep your eyes peeled for that. Go America.