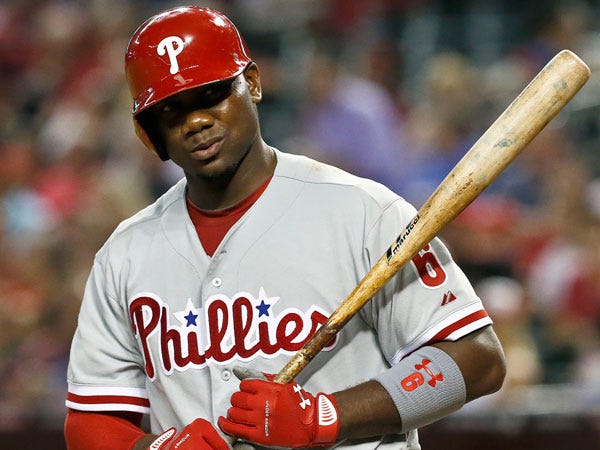 Philly.com – The Phillies will honor Ryan Howard with a “special presentation” on Sunday afternoon before he plays his final game with the team. The on-field ceremony will start at 2:30, 35 minutes before the season finale against the New York Mets. Howard is expected to start all three games of the weekend series as he plays his last games for the Phillies at Citizens Bank Park. “The fans are recognizing that this is getting closer to the end and they want to express their appreciation for what Ryan has meant to this franchise,” general manager Matt Klentak said earlier this month. “My hope is that in the final homestand — those three games against the Mets — we would be able to do something that Ryan would be able to get the proper end of a season that he deserves.” Howard will become a free agent this offseason when the Phillies exercise a $10 million buyout instead of picking up a $23 million option for 2017. He plans to play somewhere else next season. The 36-year-old enters Friday batting .194 with 24 homers and 57 RBIs in 319 at-bats.

And so it’s finally coming to the end. Ryan Howard, the last link to the 2008 World Fucking Champions of Philadelphia, will be playing his last game in this fair city, and maybe in the major leagues. Tis a bittersweet moment that should be reflected on by every baseball fan.