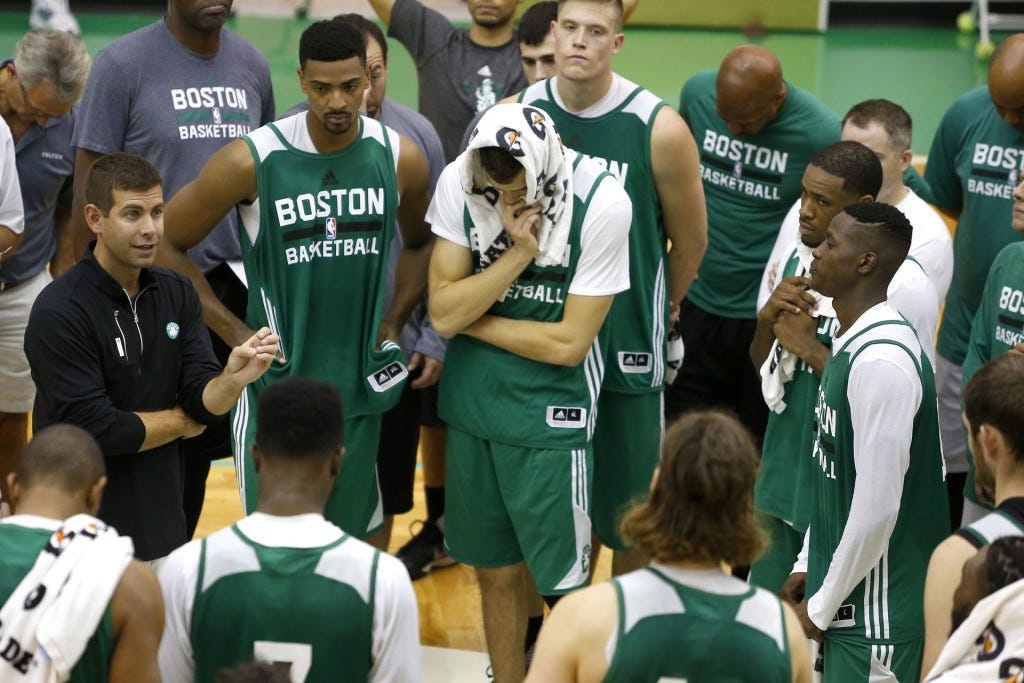 Welcome to Part 2 of our 2016-17 Boston Celtics season preview series. If you missed Part 1 and would like to kill your afternoon, click here to catch up. Now that we have an idea of how everyone prepared over the summer for camp, we can shift our focus to the crafting of the actual roster. This is an important camp for this group, but that doesn’t mean just the players (more on this later). We’ve already heard the training camp hype of how fast practices are, every Celtics fan is foaming at the mouth for positive hype, and that is what has happened. But at this moment in time I still have questions.

How crazy is Brad going to get with his lineup rotations?

The most valuable thing in today’s NBA is having players that can guard multiple positions. If you have a player that can guard a 1-4 for example, the freedom it gives your basketball team can lead to great things. The flexibility that Brad has at his disposal is scary. Maybe he feels like going completely defensive, and throws out a Avery/Marcus/Jae/Brown/Horford lineup. Now anyone you play 1-4 can guard multiple positions. You still have shooting on the floor with Avery and Al, you can play fast, and Jae can easily guard PFs in 2016.

Then let’s say Brad wants spread everyone out and launch it. An Isaiah/Avery/Hunter/Kelly/Horford lineup probably doesn’t miss. That’s what I am going to be keeping an eye on, is how players and rotations switch over the course of camp, because you know we’re getting the kitchen sink during the preseason.

Also let’s not forget that there is going to be some competition on that second unit. Are we sure Smart and Rozier can co-exist? Marcus is at his best when he is asked to be a creator, not play off the ball and be a shooter, but Rozier is at his best when he has the ball in his hands. I saw enough from Rozier this summer to warrant him getting additional minutes, so that pairing is going to have to gel if the second unit is going to be a strength.

How will the offense improve with the addition of Al Horford?

First if you haven’t, understand who Horford is as a player. Now that you’re at full mass, lets talk about how he fits into the Celtics system. Well what is the Celtics system anyway? You hear about the triangle, and the seven seconds or less offense, but what do the Celtics run?

To answer that question is to realize how Brad Stevens thinks basketball should be played. He believes that basketball is a game of rhythm when played at its very best. Well what does rhythm look like on a basketball court?

I would say the Celtics run a motion offense with a little P&R mixed in. Is that even a thing? I dunno but that’s what I’m calling it. So how does Horford fit into that. Well, look at those vines above, everywhere you see Jared Sullinger, close your eyes and picture Al Horford. See where Sully is catching the ball? Now imagine there is a better three point shooter catching that ball (34% vs 28%). All of the sudden that big has to come out and respect Horford at the top of the key, which in turn creates more space for Isaiah/Avery/Jae to cut through. Then what if Horford decides he doesn’t want to shoot, but create. Well I sure like having a better passer in that spot (3.2 vs 2.3 asts) to find those cutters.

You see Horford is the dream style of player you want to put into Brad Stevens’ rhythm. Everything you need from a big in this system, he provides. But there’s a secondary reason to be excited about Horford in this offense. He brings a new element. Now the Celtics can run an offense through the post. Sullinger scored in the post, but it was more from offensive rebounds and putbacks, whereas Horford brings more of an offensive repertoire. At the very least, this gives Brad Stevens more options, and there are few things I trust more than Brad Stevens with options.

How Does Brad handle the pressure?

Hey look, this season is big for everybody. The players, Brad, me, all of us. Here’s what we know. Brad has wildly exceeded expectations in my mind from when they plucked him out of college. College coaches are not supposed to have success on this level, especially with the talent he has had to work with. His ability to basically fast forward this entire rebuild is all you need to know about him as a coach, but that doesn’t mean he doesn’t have his own set of pressure.

We are approaching put up or shut up time in my opinion. The talent is here, and more importantly, the system has been in place for three years. The roster is mostly built with players that have only played in Brad’s system, and each year we’ve seen progress, but now it’s bigger than winning a first round series.

Here’s the thing I can’t get out of my mind though. There’s a reason Belichick has taken a liking to Brad Stevens. Watching and listening to Brad, he’s adopted the Belichick model, only nicer because come on, it’s Brad Stevens. I think he’s ready for the pressure because of how he approaches coaching. Never too high, never too low, never satisfied. You think he likes the fact they got eliminated early and Kevin Durant turned him down? Doubt it.

Who has the bigger leap year, Marcus Smart or Kelly Olynyk?

Two really important players for the 2016-17 Celtics. Kelly didn’t make that elite Year 3 leap last year, while this is that opportunity for Marcus. Both have to be much better if we even want to begin to talk about being the second best team in the East, and both have serious questions.

Before Olynyk got hurt, we saw a drastic improvement in his outside shooting. Jumping from 35% to 40% is not small feat, but has he developed his game enough to bring more to the table? His injury makes me nervous because without being cleared, does he look more the same, then better. What I want to see from Kelly as preseason starts is more things like this, more Dirk-Lite

Marcus is the real story though. We can’t have another year of 34%/24% splits, and I think he knows that. Normally when a player shoots like that, you can’t play him, but with Marcus it’s the opposite. The second he steps onto the floor, he impacts the game. Almost immediately. I’ve been saying it since he got here and Brad agreed with me this summer, Marcus just makes winning plays. So how can we get his shooting to match up?

Play him in the pick and roll until the end of time. Look at his shot chart from last year and tell me if you see the area that puts Smart in the best position to succeed 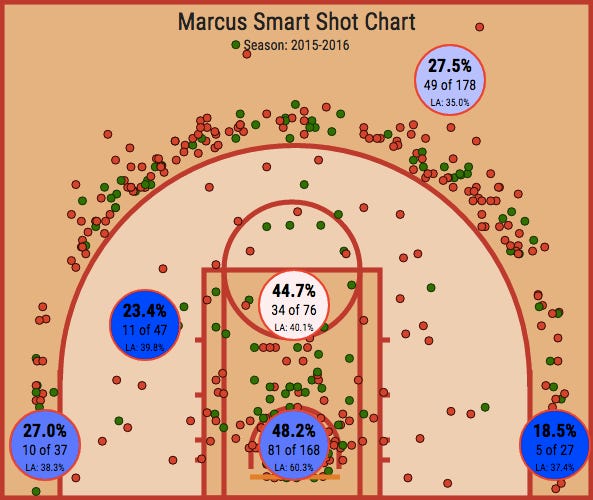 Pick and roll with Mickey, pick and pop with Olynyk and watch Marcus thrive. Where he gets into trouble is when he tries to play outside in. Instead of starting by taking it to the basket or working into a midrange, often times he would start by jacking a couple threes and would work himself into a funk. This way you reverse that and allow him to use his strength to his advantage. With that confidence comes the three point shot. Boom.

Will I finally have to say my goodbyes to James Young?

And that’ll do it for Part 2. The season preview series will be taking a break until the final roster is out for Part 3, but fear not, breakdowns of every scrimmage/preseason game is on the horizon. Rejoice, it’s basketball season.