Right now, there are two popular schools of thought with regards to how a manager affects a team’s performance over a large enough sample size of Major League Baseball games, one school of thought being more popular than the other.  Simply put, here they are:

1. Managers are either Satan reincarnated (Robin Ventura) or the Messiah (Joe Madden) and they make or break a lot of a team’s success

2. Managers have little to no affect on the outcome of a team and are basically useless

In my opinion, I’d say most fans would fall under category 1.  They want the manager fired one day, extended the next.  And they’re all knee-jerk opinions based on how the team is doing at that very moment. 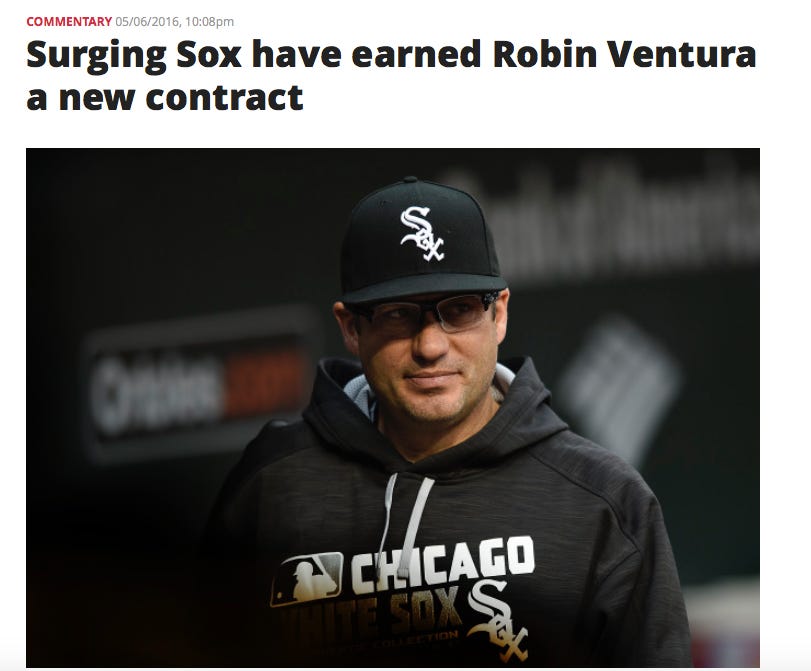 followed by an article published on the scores website just 26 days later: 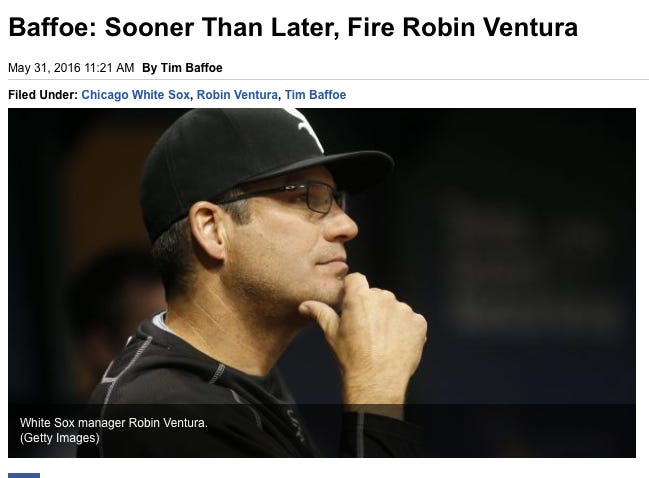 The second school of thought is also the newer school of thought: that managers have no true affect on a season’s worth of games. Yeah, they can fuck up games here or there by making shit decision regarding a bullpen, pinch hit, bunt, etc… but over the course of 162 games every manager fucks up more or less the same amount, so it all evens out.  People that have a raging hardon for advanced stats love this perspective.

Now I know what you’re thinking:  “White Sox Dave, you’re one of the great baseball minds of our time.  Outscooping Rosenthal and Heyman one day, chucking 88 MPH heaters at the Cell’s speed pitch the next, do you think managers really affect the game?”

My answer is simple, yes and no.  Again, every manager will make a shit call to go to a left handed reliever just because the “book” calls for it and every manager will pinch hit a bench guy who goes deep to win the game.  Over the course of a season, these moves more or less regress to the mean for every manager of every team.  What really, truly affects the performance of a team is whether or not that team has good players or not.  I’ll say this right now: if Joe Madden were the manager of the Chicago White Sox, they might be a few games better than they are now, but they are in no way, shape or form sniffing the playoffs for the 8th season in a row.  Do I think the Sox would have a better record at the season’s conclusion?  You bet your ass I do.  But not because he’s a great Xs and Os manager.  That’s where most managers are pretty much the same.

Same goes for Ventura and the Cubs; if RV were managing the Cubs they’re still cruising to the playoffs without an ounce of competition for anyone else in the NL Central.  Gun to head, I’d say they’re still winning 98-100 games.  Because they have a really good fucking group of players.

Now, I do think a manager still plays a pivotal role on a baseball team.  Not because they’re managing in game decisions, but because they’re managing the TWTW of his team.  This is where, in my opinion, Madden excels and Ventura stinks.  Granted I’m watching from my couch and not in the clubhouse, but the energy, passion and fire the Cubs play with is the complete and total antithesis of what the Sox play with.  It cannot be measured by statistics, but Joe Madden is a perfect manager for this reason; for whatever reason he can get his team playing like they have icy hot on their ballsack every single day.  Attitude reflects leadership, and the Cubs attitude is fantastic and the White Sox attitude flat out sucks.

That said, don’t forget that Joe Madden has had multiple sub .500 seasons as a manager, including a 77 win season the year before the Cubs tampered with him and illegally poached him from the Rays.  And that was because that Rays team had shitty players.

“So White Sox Dave, now that we know that you, the greatest baseball mind of our time, doesn’t think everyone should be crucifying Robin Ventura for the shit success the Sox have had over the years, does that mean you want to extend him?”

Why?  Not because I think Ventura will have any true quantifiable affect on box scores in 2017 if he chooses to come back.  Cuz he won’t. Not because I think with a better 25 man roster in 2017 the team’s attitude will change, either… it won’t.  But because this is a flat out PR nightmare for the three headed monster of Jerry Reinsdorf, Kenny Williams and Rick Hahn if he is brought back.  And that is the last fucking thing on earth the White Sox need right now.

Let’s take a look at the biggest White Sox stories, dating back 6 short months ago to March: 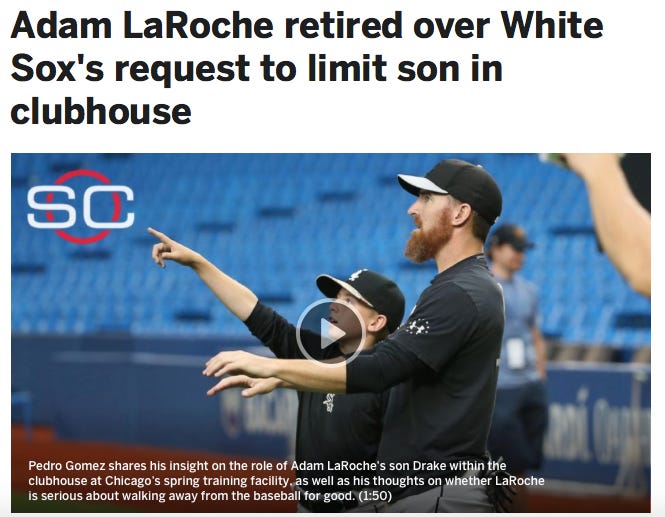 NBD, the White Sox wanted to limit a kid’s access to a MLB clubhouse.  It got Laroche the fuck off the team, so good on the White Sox, but it wasn’t exactly a good reason to be in the news, especially after another offseason of half-assed “buying” 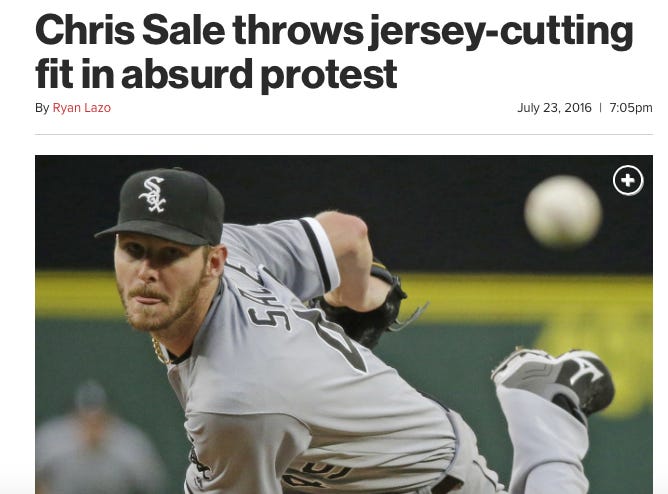 By this time the White Sox were in free fall.  The only thing they had going for them was Chris Sale and Jose Quintana bending opposing offenses over handrails on the reg.  So when Chris Sale makes national headlines because he didn’t wanna wear an untucked throwback jersey and proceeds to take garden shears to them, you have yourself a lil bit of a problem.  That’s not exactly what you want your star fucking player in news for. 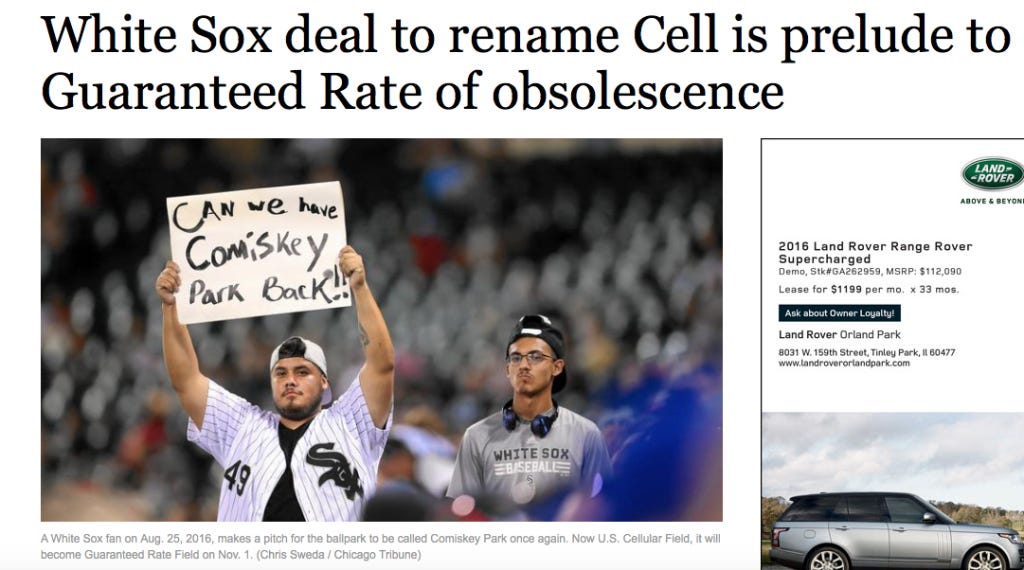 In the grand scheme of things, this isn’t a big deal.  Every organization in every sport has corporate sponsorship these days.  It’s just business.  I’m all about that big payday too, so I don’t hate the White Sox for this.  Now, with that said, I don’t have an extensive marketing background, but when your organization is a complete and total dumpster fire, I don’t think it would behoove you to have your brand subconsciously associated with a corporation whose logo is a RED FUCKING ARROW POINTING DOWN

Holy shit the incompetence of the people that make the decisions in this organization is MIND BOGGLING!

Now that brings me to Ventura.  The White Sox are fucking ASININE if the reports are true, that they are leaving the decision for Ventura to return up to him.  And for the record, since I have moles in every crevice of that organization at this point, I’ve heard said reports are true, that they did leave the option up to Ventura.  No, no contract was offered.  But they basically said “if you want to come back, we’ll have you”.

This is worse than any other PR nightmare the White Sox have had recently, and that’s a lot of PR nightmares.  Unless Reinsdorf spends massively in free agency and the White Sox actually put a playoff caliber product on the field, all they’re doing is alienating an already alienated fanbase.  It’s a big FUCK YOU to the common fan, and shit like this happens…

… you get emails sent to season ticket reps making 8 bucks an hour from pissed off fans.

If they trade Sale, Q, or any of pieces of their already very good core, they’re gonna win about 60 games next year, and with Ventura at the helm of a 60 win team and the vast majority of the fanbase thinking he’s so important to wins and losses, you’re not gonna generate dick for attendance.  Which makes me feel like that will be a built in excuse to not spend on elite free agents to build around the haul you’ll get for Sale or Q.

It all makes me fucking sick.  Hopefully Ventura doesn’t opt to return and rides into the sunset so we can remember him for the great player he was, not for the shitty manager most fans perceive him to be.

PS – a popular theory is that the White Sox brass is floating this to their mouthpiece Bob Nightingale just so it doesn’t seem like RV was relieved of his duties, because they already know he’s done.

A. His contract is up after Sunday, so he won’t be fired, he just won’t be retained.  Big difference.

2. Why go to extensive lengths to try and trick the public when you’ve already sullied a former fan favorite’s name and he’s already basically ostracized in the White Sox community anyways and

D. Who gives a fuck if he’s fired or not extended?  He’s not coming back anyways.  Again, if this is the case, just more incompetence.